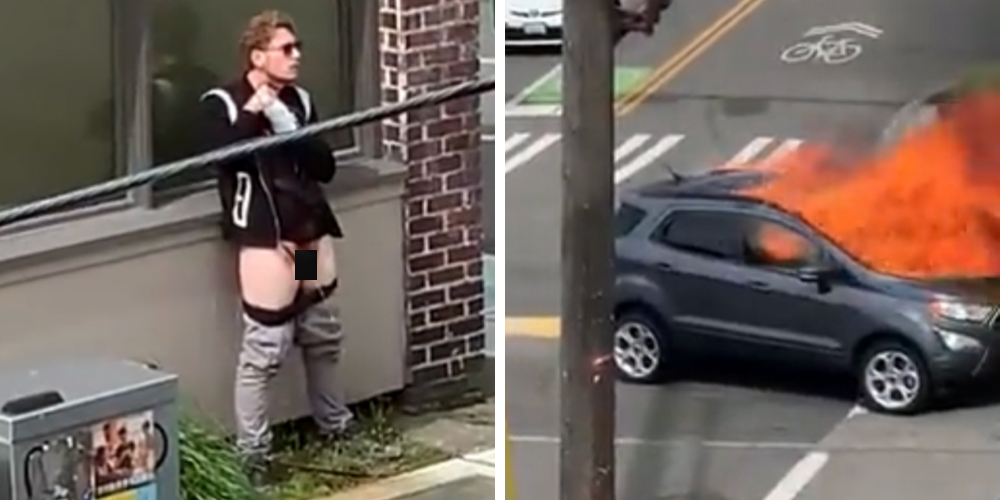 A man suffering from an alleged mental health crisis caused a shocking scene in Seattle, Washington, on Tuesday which has since gone viral across social media.

In the video posted to Twitter by @jessablvck, the man can be seen posted up against a building with a self-inflicted knife wound to the neck while exposing his genitalia as he peed on the sidewalk. A car is doused in flames on the other side of the street.

Seattle police sources told The Post Millennial that officers in the East Precinct and Crisis Response Team (CRT) responded to calls of a car on fire in an intersection and a man possibly bleeding.

Upon arrival, SPD officers located the man with a 3-4 inch knife lodged in his neck. When officers approached the man, he took the knife out and proceeded to stab himself two more times in the neck, according to sources.

Not being cooperative with police, officers reportedly used a taser on the subject and started performing life-saving measures.

Before officers responded to the call, the man suffering from the alleged mental health crisis stopped his car in the middle of 18th Ave and Jackson St in the Capitol Hill area of Seattle, notoriously known as the Capitol Hill Autonomous Zone. He then allegedly set his vehicle on fire after dousing both himself and the vehicle in gasoline.

The Seattle Fire Department also responded to the scene and transported the subject to a nearby hospital. The man's current condition is unknown, although officers told The Post Millennial that he is expected to live.