Sheila Copps implies women are “bitches” for standing up to Trudeau

Sheila Copps, the former Deputy Prime Minister of Canada under the Liberal Jean Chrétien government, appears to implied earlier today that both Jody Wilson-Raybould and Jane Philpott are both bitches for their resignations. 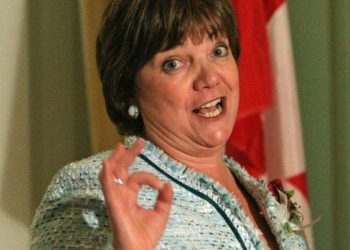 Sheila Copps, the former Deputy Prime Minister of Canada under the Jean Chrétien Liberal government, appears to have implied earlier today that Jody Wilson-Raybould, Jane Philpott, and Celina Caesar-Chavannes are “bitches” for standing up to and walking away from the Prime Minister.

How did this insane turn of events come about? Copps decided to respond to Quillette editor Jonathan Kay’s original Tweet stating “it’s like the Libs went from “I #believe every woman” to “put a sock in it, b*tch” in about 4 seconds flat” by writing “Trudeau has not said bitch to anyone. Even though it may apply. “

Interestingly, this is not Copps’ first foray into extremely offensive commentary when it comes to defending the Trudeau government on the SNC-scandal.

Copps’ interestingly made the argument that Wilson-Raybould had dual loyalties, by writing in the Hill Times (paywall) that “I think, had there been 9,000 Aboriginal jobs involved in her decision, she would have viewed it differently.”

A message many did not find appealing, to say the least.

She was tone-deaf when she argued on the CBC that it made zero sense that Jody Wilson-Raybould and Jane Philpott would remain as Liberals. I recommend you watch the video, as the CBC host repeatedly tries to make the point that the party has specific ideals outside of the leader.

But hey, some people prefer shows and characters, over ideas, values, and actually speaking truth to power. This may be most obvious when Copps continuously cheers on the PM and encourages him to “lance the boils in his caucus.”

The former Attorney General Jody Wilson-Raybould resigned from Trudeau’s cabinet soon after the Globe and Mail’s Robert Fife published an article noting that there had been undue pressure from the PMO to alter Jody Wilson-Raybould’s decision to not overturn the finding of a prosecutor who had announced that SNC-Lavalin will be going to court over bribing allegations.

She then after testified to the Justice and Human Rights Committee that there had been repeated undue pressure from multiple people in the PMO including the Prime Minister himself, who brought up jobs in Quebec and his re-election.

Since then, Treasury Board President Jane Philpott has also resigned, in solidarity this time over the PM’s handling of the scandal.

The Liberals, notably Gerry Butts, the former Principal Secretary to Prime Minister Justin Trudeau, have defended the pressure they put on Wilson-Raybould saying that the AG’s mind could not be made up until the case was done.

If the organization is found to violate section 3 or 4 of the Corruption of Foreign Public Officials Act, the one factor to not consider is jobs. You can read more on why the company is not entitled to remediation agreements by clicking here.

So what is SNC’s history of corruption? Well, it includes serious charges such as spending millions to bribe the former dictator of Libya’s son, with at least $30,000 spent on Canadian prostitutes, a  probe for fraud over the building of the Jacques Cartier Bridge, and their former CEO pleading guilty to corruption charges over the construction of the Montreal super hospital.

These are only just a few. The company is currently banned from taking projects from the World Bank, a list which they dominate.

SNC-Lavalin also has a long history of supporting the Liberals overwhelmingly,  so much so that they broke campaign finance law in order to donate excessively to the party.

SNC-Lavalin has entered into a compliance agreement with Elections Canada for making nearly $118,000 in contributions that violated the Canada Elections Act between March 9, 2004, and May 1, 2011.

What is really striking about this entire debacle, made worse by Ms. Copps comments, is that the Liberal’s sunshine brand of diversity and feminism has taken a real blow for very little recognizable gain.

Is it really because of the 9,000 or so jobs which SNC-Lavalin has in Canada? Well, even that does not make sense.

All current government contracts would be allowed to continue regardless of criminal prosecution, engineering companies would pick up any lost staff in case of corporate loss. Even then, there are other factors which would push to the company to stay here such as deals with Caisse requiring SNC-Lavalin to keep its HQ in Montreal until 2024.

Perhaps most importantly though, the government is engaged in changing policy in order to allow firms such as SNC-Lavalin to continue bidding on contracts.

So what is really going on here? It seems more than anything, the Liberals are returning favours to the elite shareholding class of SNC-Lavalin, and Sheila Copps has decided to plant her partisan flag in the middle of that explosive mess.

What do you think about the comments made by Copps?

Is there a case here for the Liberals or is this a case of partisanship gone wrong?