That was just a tiny portion of the almost $2 million SNC spent to entertain the young Gaddafi. 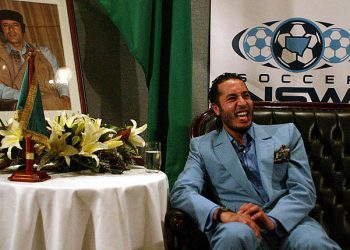 According to the Toronto Star, SNC-Lavalin's grandiose spending on the son of former Libyan dictator Muammar Gaddafi to win a Libyan contract did not stop at $30,000 for prostitutes.

That was just a tiny portion of the almost $2 million SNC spent to entertain the young Gaddafi, in order to win billions in Libyan projects. Those expenses were written off as expenses associated with construction projects in Libya.

Details of the visit have now become public after a preliminary inquiry into bribery charges against Stephane Roy.

Mr Roy is a a former vice-president of SNC-Lavalin who was released after authorities failed to provide him a trial within a reasonable time frame.

The Supreme Court of Canada in 2016 set a limit of 30 months between the laying of charges and the anticipated end of a criminal trial in provincial court cases. Roy’s case was scheduled to conclude 64 months after he was initially charged. Outside of Mr.Roy none of the other eight people charged by the RCMP have faced conviction for bribing foreign offical. Although the RCMP's National Division had 115 dedicated investigators by 2013 trying their best to make something stick.

Outside of the public Libyan bribes, the company itself has been in news for losing convictions against its former CEO Pierre Duhaime and his executive vice-president of construction over bribes paid to win the $1.3-billion contract to build the McGill University Health Centre super hospital.

The RCMP is also still investigating SNC-Lavalin over $2.3 million in bribes the head of the Federal Bridge Corp.

Think about that for a moment in context to what is happening at the federal level where the Liberal government is alleged to have pressured an AG to work with SNC-Lavalin.

If SNC-Lavalin the company and its executives are both able to walk away without real justice (whether due to political interference or judicial incompetence) than that is a severe problem for our country and its institutions.

It would mean that for all of the gloating and global drumming that we do our nation is still largely designed for a two-track legal system. Where those with significant resources  can live by one set of rules, and those without expected to live by another.

What do you think about the large amount spent here? Join the conversation by commenting below!