While events in Ottawa were a natural immediate trigger of conversation about political discrimination, my bill seeks to respond to a series of concerns that are broader and longer standing. 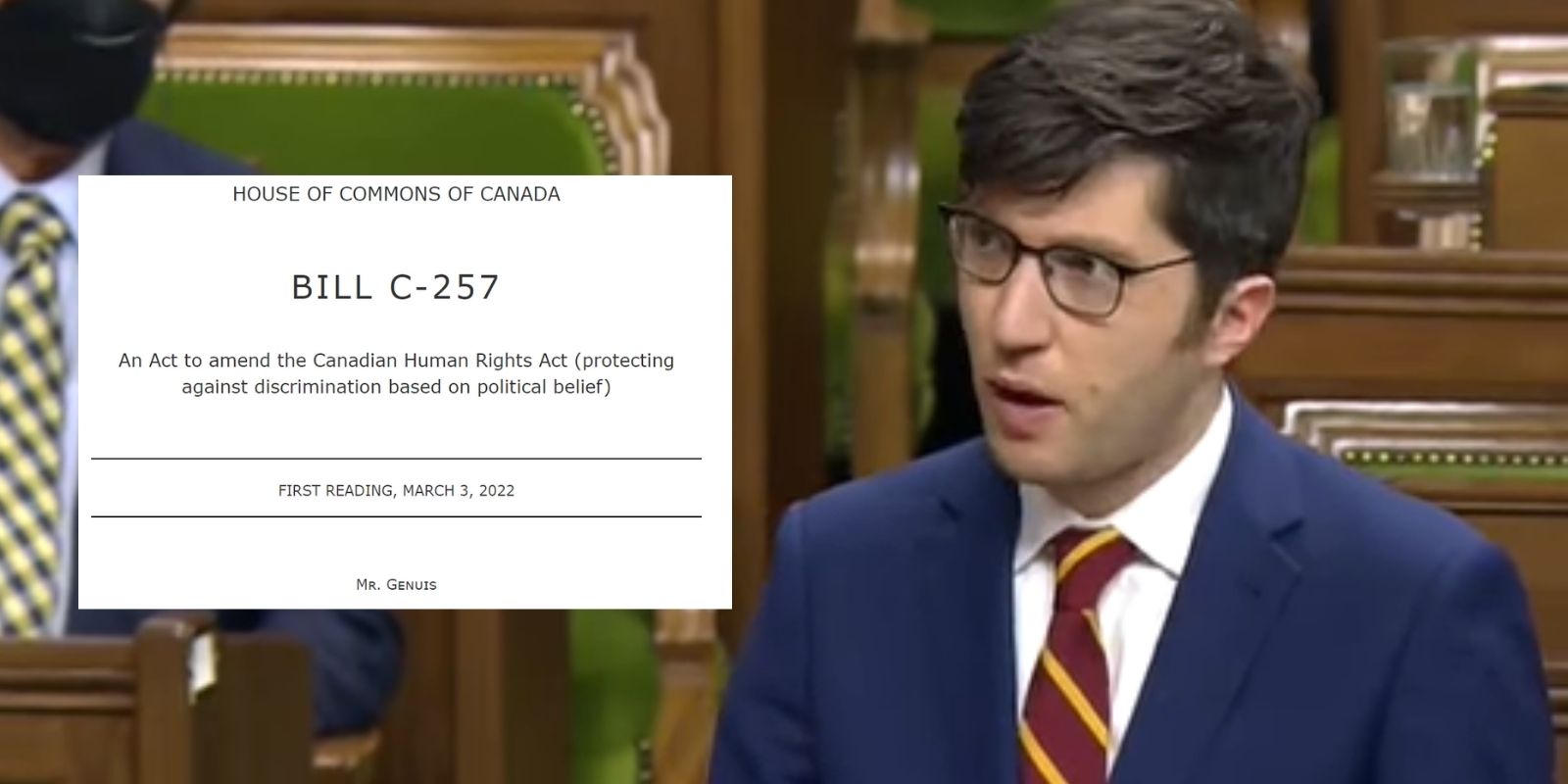 Much of the coverage around my private member’s Bill C-257 has focused on the degree to which it responds to the events surrounding the convoy movement and the use of the Federal Emergencies Act. Bill C-257 proposes to add "political belief and activity" as prohibited grounds of discrimination in the Canadian Human Rights Act, and I tabled the bill at a time when concerns were being raised about the inconsistent response of the federal government to protests, depending on whether or not the government agreed with the protestors’ objectives.

But while events in Ottawa were a natural immediate trigger of conversation about political discrimination, my bill seeks to respond to a series of concerns that are broader and longer standing.

The genesis for me proposing Bill C-257 is more general concern about the rise and possible application of so-called "Stakeholder Capitalism." Stakeholder Capitalism is the idea that we should create an economic system in which companies seek to maximize value for all "stakeholders," instead of just for their own shareholders.

On the face of it, the idea that companies should concern themselves with the social good instead of just their own bottom line is intuitively appealing to many people. The Stakeholder Capitalism concept has been advanced and defended by such prominent people as Klaus Schwab (Stakeholder Capitalism is the title of his latest book) and Mark Carney (who’s book Value(s) emphasizes similar themes).

A good critique of Stakeholder Capitalism is the book Woke, Inc. by tech entrepreneur Vivek Ramaswamy. Ramaswamy argues that companies who purport to be maximizing value for all are often doing so insincerely and to advance their own interests. Most corporations who are saying "Black Lives Matter" are not saying the same about Uyghur lives. Mark Carney has himself faced criticism for making and then walking back the highly dubious claim that the half-trillion-dollar asset management firm where he works is "net zero."

Clearly many companies who claim to care about certain values do not actually care about them in practice, but Ramaswamy’s critique goes beyond just hypocrisy. He argues that, even when practiced sincerely, Stakeholder Capitalism gives too much power to corporations. Large companies using their power to push particular ideas about the common good are claiming an outsized role in debates about common values. Decisions about the goods that a society pursues should be made through democratic competition and debate, not through corporate-directed "stakeholder consultations" that perpetuate corporate interests and power. The goods that a society prioritizes should be selected on a "one person one vote" basis, not a "one share, one vote" basis. Even the most generous-hearted corporations necessarily reflect the power of shareholders and management to aggregate stakeholder feedback and make decision. A society in which large corporations identify stakeholder values and then push those values is functionally much less democratic than a society in which collective social priorities are identified through open and transparent democratic debate.

The biggest problem with the Stakeholder Capitalism model is that, when governments and corporations collaborate to define and advance their notions of the common good, governments can induce corporations to act on their behalf without the same accountability mechanisms that exist with direct government action. For instance, when governments tell social media giants "you must regulate content, or we will do it for you," they give private companies license to regulate speech on their behalf, without the same kinds of checks and balances that would be required if governments tried to regulate speech directly. If governments were to use their regulatory power to induce banks to ‘stand for’ certain progressive values, then in practice banks might deny services to individuals or groups that are not aligned with those values. The risk here is significant that government can use the Stakeholder

On the other hand, it goes without saying that real problems can arise as a result of companies thinking only about their bottom line. Nobody wants to see companies ignoring the common good and hurting the communities that they operate in as a result, and this concern is at the root of arguments for a new model. But empowering corporations to play a central role in determinations about the social good and then to impose their conclusions on employees and customers is the wrong way to go. A better solution to the problems of unbridled shareholder capitalism is to impose appropriate regulatory and other constraints on corporate power. For example, rather than push companies to be insincere purveyors of environmentalism and social justice, the state can act directly to require environmental compliance and non-discrimination.

My Bill C-257 seeks to take an important step towards countering the risks associated with the Stakeholder Capitalism model. By adding "political belief and activity" to the federal Canadian Human Rights Act, my bill would prevent large corporations within federal jurisdiction from pressuring their employees to engage in or refrain from political activities. It would also prevent those companies from denying service to people on the basis of their politics. This bill does not prevent companies from taking positions on political issues, but it constrains their ability to use coercion to advance those positions.

This bill reflects my belief that the values that a society advances should be determined by voters acting freely and independently, not be corporations who are subject to influence by regulators.

I am hopeful that parties across the political spectrum will appreciate the need for C-257. This bill protects the rights of workers and customers to be free from coercion. Most fundamentally, it protects our democracy from the development of decision-making processes that constrain public conversation and disenfranchise voters.

Garnett Genuis MP is a Canadian politician who has served as the member of Parliament for the riding of Sherwood Park—Fort Saskatchewan since 2015.