The driver tried to escape from police after a traffic stop, but ended up driving his car through the barricade of a street carnival and into a crowd of thousands of people. 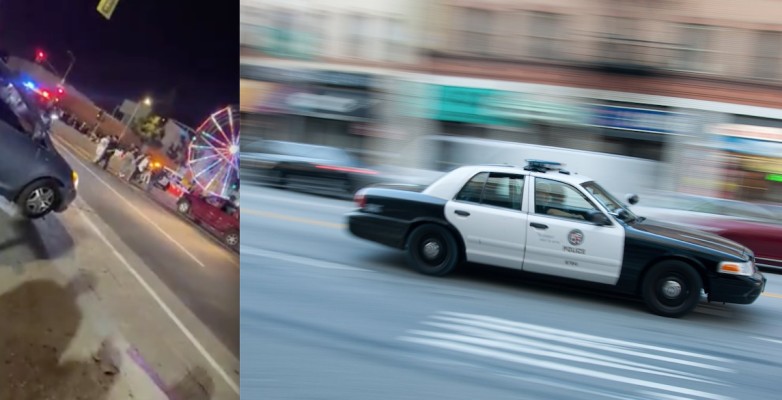 Thousands of people were gathered for a street carnival in the South Central area of LA when the incident occurred, the Daily Mail reports.

The driver of the white Porsche Cayenne, Steven Weems, 23, was allegedly fleeing from police after a failed attempt at a traffic stop.

In his attempt to get away, he ended up plowing his car through the cement rail bordering the carnival, where approximately 2,000 people were waiting in lines for rides and food, and enjoying the festivities.

Weems was arrested near the scene and subsequently charged with a felony hit-and-run. He is being held on $50,000 bail.

Witnesses reported hearing a loud boom that sounded like gunshots, which sent people into a panic, screaming and running in all directions.

"It looks like the driver tried to get out of the fair, but because of the barricades, he was unable to get out so he continued through the crowd of people, which we estimate was between a thousand to 2,000 people," police Sgt. Robert Leary told the Los Angeles Times.

After managing to flee the scene, his vehicle was found three blocks away and he was detained shortly thereafter.

The six people who were hospitalized were between the ages of 30 and 50. None had life-threatening injuries.

"It is a blessing that no one actually got severely injured," Stg. Leary said. "I think that they heard the car, I'm not sure if he was honking, obviously people were screaming. It was quite hectic, so I think people saw this car coming in and thankfully they got out of the way in time."

The driver was charged early on Sunday. It's unclear if he was under the influence of some sort of substance or alcohol.
ADVERTISEMENT
ADVERTISEMENT
LAPD carnival