A Braintree, Mass. teacher has won a seat on the city's school board, months after resigning from his high school teaching position over photos that surfaced of him at the Capitol on January 6. 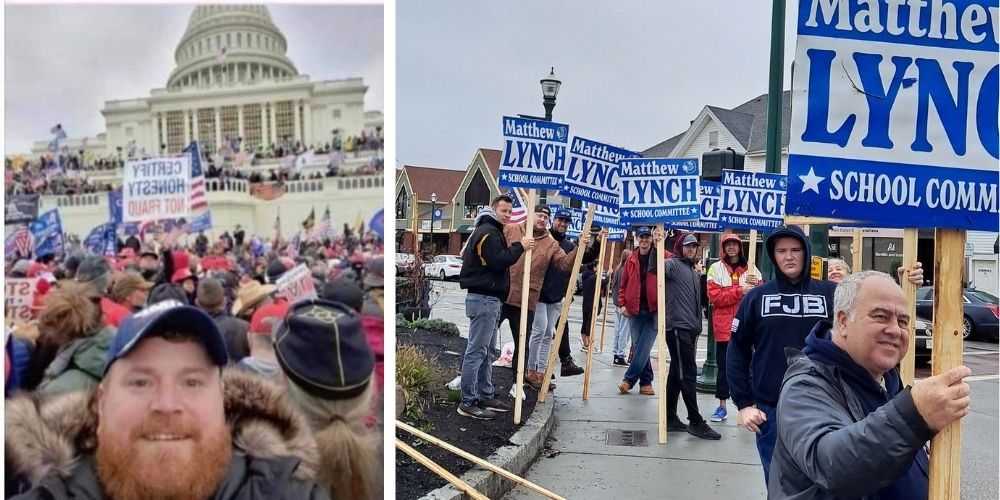 A Braintree, Mass. teacher has won a seat on the city's school board, months after resigning from his high school teaching position over photos that surfaced of him at the Capitol on January 6.

Lynch was previously a teacher at Braintree High School, where he taught for nearly 10 years before resigning. Lynch told Patch that the FBI had questioned him twice in regards to January 6, where a photo of him at the Capitol building surfaced.

That picture was shared on social media, and members of several community Facebook groups, including A Better Braintree and the South Braintree/Highlands Civic Community, took screenshots and shared the photo around.

That photo was shared alongside the FBI tip line used for investigating leads into January 6 offenders. Lynch claimed that the FBI visit stemmed from tips called into that hotline.

Lynch accused those who shared the picture and FBI information of "slandering [him] as a domestic terrorist." He called the group a "digital lynch mob" who "decided they would take 'justice' into their own hands," according to Patch.

Lynch resigned from his position in February, writing in his resignation letter that he could no longer work as a teacher due to his personal beliefs.

"Unfortunately as the times change and situations evolve, I can no longer be true to myself while service the role as a Braintree Public School Teacher," Lynch wrote in his resignation letter, obtained by Patch.

"My military experience as an Intelligence Analyst has given me unique perspective on what is currently going on in both our country and our town and I fear we are heading on a real collision course," Lynch continued in the letter.

"I feel I need to make my voice heard in the town of Braintree but in doing so will have unintended side effects which will be completely unfair to my students," he said.

Lynch said ahead of the election that "kid's mental health" was the most pressing issue facing the school board, and giving as much of the decision making process back to the parents as possible, according to a candidate profile by Patch.

"The state locked our kids out of school, put them in a losing posture with remote learning and caused trauma at levels we don't even know about yet," said Lynch.

"What did our school board do? Ignored parents, got rid of the mascot, changed the color of graduation gowns and renamed 'house master' to 'vice principal.' What's the old saying 'Hard times create strong men, strong men create good times, good times create weak men, and weak men create hard times.' Well not hard to see where we are at."

"There is a revolution in education going on right now. More and more kids will be leaving public schools for private, Catholic or homeschooling, which will have a negative effect on Braintree's schools," he continued.