"I think it should be put in storage somewhere, destroyed or whatever" 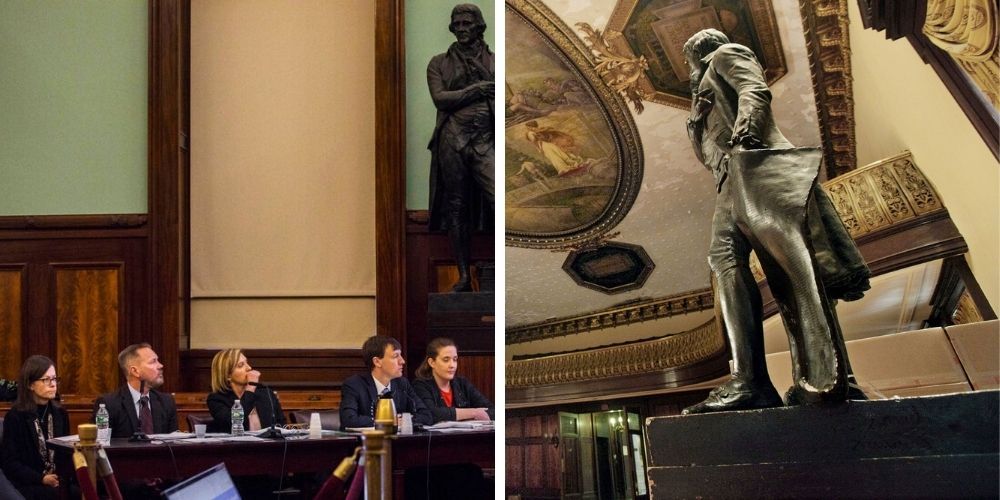 New York City’s Public Design Commission voted unanimously Monday to remove a statue of Thomas Jefferson from the legislative chamber at City Hall by the end of the year, after four lawmakers testified that his status as a slaveholder was offensive to the council’s African American members. The nine-member commission are all mayoral appointees.

For over 100 years, the 7-foot-tall statue of the third US President and author of the Declaration of Independence, has stood in the chamber. According to The New York Post, the statue, which is also an historical monument, "…was gifted to the city in 1834 by Uriah Phillips Levy, the nation’s first Jewish Naval commodore and an admirer of Jefferson’s belief in religious freedom."

According to The New York Times, "The painted plaster version was later donated to New Yorkers and arrived at City Hall around 1834. When it first arrived in New York, Levy charged to view it and used the proceeds to feed the poor. It was installed in the City Council Chamber in the 1910s."

A replica of the statue by sculptor Pierre-Jean David remains prominently displayed in the Capitol Rotunda in Washington, DC. Several other Jefferson statues around the US have been removed or destroyed since the George Floyd riots, including ones in Georgia and Oregon.

Multiple alternative venues for the statue have been suggested including the Governor’s Room in City Hall across from the Council chambers, the New-York Historical Society, and the New York Public Library, which has a copy of the Declaration of Independence in Jefferson’s handwriting.

Democratic Assemblyman Charles Barron of Brooklyn, who first demanded the removal of the statue 20 years ago when he on the city council, testified that, "I think it should be put in storage somewhere, destroyed or whatever."

Barron was referring to Jefferson’s relationship with his slave Sally Heming.

University of Oxford historian Raymond Lavertue said that the statue should be removed from Council chambers but remain in a "...seat of government in a public space." He added that Jefferson was a "massively flawed" human being, who’s being honored for his ideas about life, liberty and the pursuit of happiness.