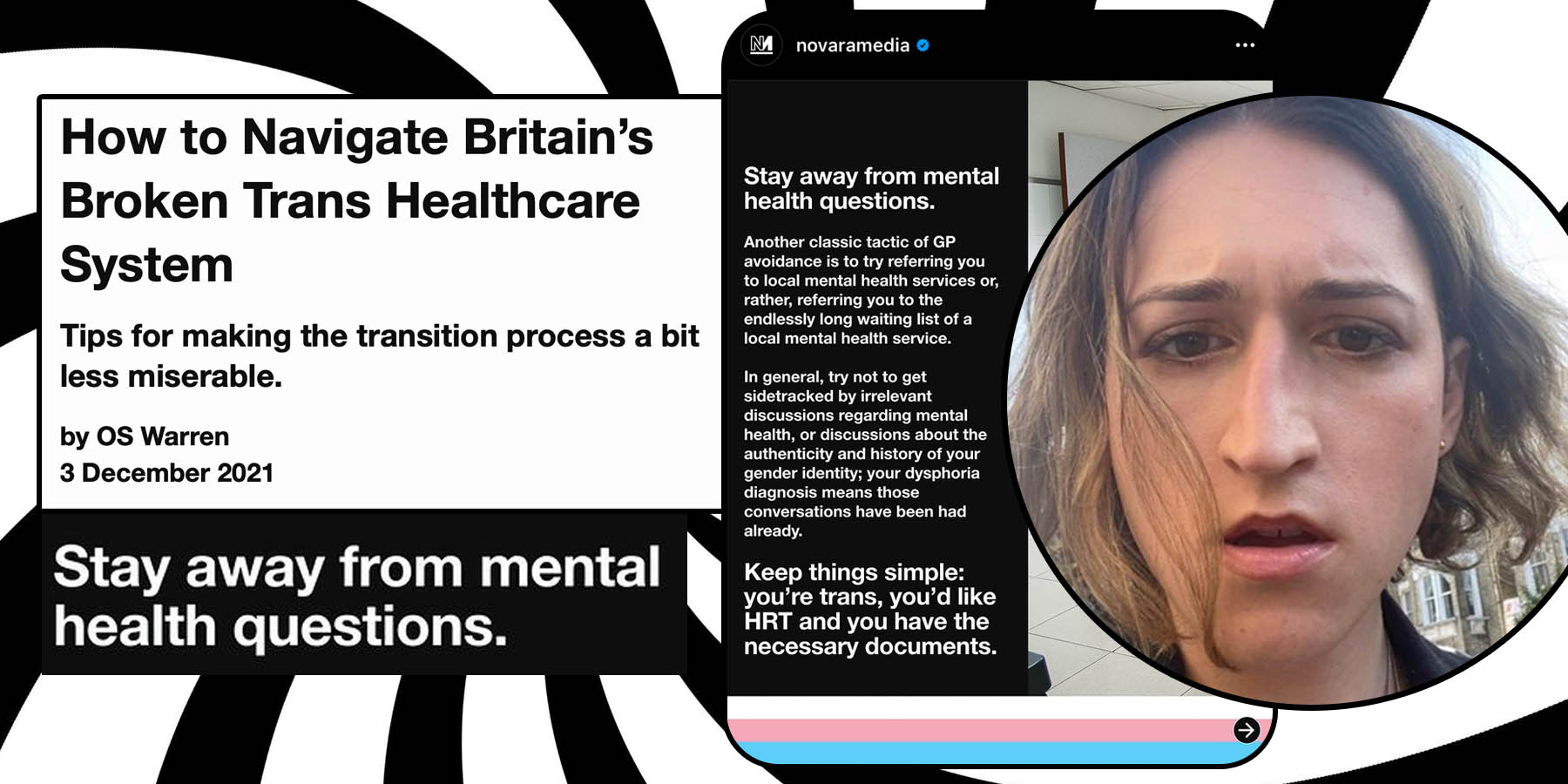 O.S. Warren, a trans-identified biological male, wrote an article in December 2021 offering advice on how to game Britain’s healthcare system to obtain hormone replacement therapy (HRT). The article was reconfigured for social media and published last month on the @novaramedia Instagram account. A Twitter user called attention to the alarming medical advice offered from the left-wing news site.

Warren believes that transgender healthcare in the UK is experiencing a "crisis," where patients who seek drugs and surgeries to "affirm" their trans identities are "subjected to intolerable waiting times." Warren wrote a guide to help others sidestep medically necessary safeguarding that they believe to be merely "punitive."

"This guide offers up some strategies for trans people seeking the most common form of gender-affirming healthcare, hormone replacement therapy (HRT), in the face of the UK’s outdated and punitive healthcare system," wrote Warren.

Warren says they designed the guide to help others "build up as strong a 'case' as possible" before visiting a general practitioner "in an attempt to sidestep" the Gender Identity Clinic.

Warren believes that psychiatrists are "patriarchal gatekeepers of gender roles" who "shouldn’t be playing a role in whether or not you receive the gender-affirming care you need."

"Much of the visit will be about you guiding and reassuring your GP, so expect irrelevant and invasive questions," Warren said.

"I’m not suggesting you tell any especially big fibs, but maybe finesse your story into one that’s likely to be received with the least amount of confusion (and bear that in mind with the psychiatrists too)," said Warren. "Trans people have been doing this ever since they first got access to medical textbooks and started passing them around before appointments to brush up on their lines, so you’ll be joining a storied lineage of creative trans memoirists. You’re not here to make friends, you’re here to get hormones. Don’t feel bad about it," Warren added.

A section of the article begins with the subheading "Stay away from mental health questions," in bold font.

Warren calls the discussions with a medical professional regarding mental health "irrelevant."

"In general, try not to get sidetracked by irrelevant discussions regarding mental health, or discussions about the authenticity and history of your gender identity,” advises Warren. "Keep things simple: you’re trans, you’d like HRT and you have the necessary documents."

Warren advocates for dumping a general practitioner for a new one if they do not acquiesce to demands for hormones. "Changing your GP is relatively easy: just sign up at the new surgery and your records are transferred. It can often be a good option if you are struggling against a particularly unhelpful individual." Warren includes a list of "cooperative GPs" from the Action for Trans Health, adding "There’s a lot of time to be wasted on persuading someone who won’t engage, so move on to someone who will if you can."