US President Donald Trump’s Facebook page shared a post contrasting Canada’s major job loss in November to the gains made in America. 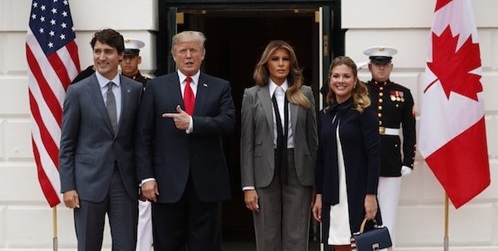 US President Donald Trump’s official Facebook page shared a post commending him for the American job numbers for November, while calling out Prime Minister Justin Trudeau and the abysmal job numbers in Canada, the worst since the 2008 financial crisis.

“Let’s see. President Trump is fighting for America and our economy [sic] just ADDED 266,000 jobs,” starts the post from a Trump supporter shared by the POTUS on Facebook.

“Justin Trudeau was laughing it up in London and the Canadian economy just LOST 71,200 jobs. That’s no joke. Trump wins. Again,” the post ends, referring to Trudeau being caught on a hot mic earlier in the week making fun of Trump to other world leaders when at the NATO anniversary gathering.

Trump responded by calling Trudeau “two-faced” and that the PM didn’t like him calling out Canada as “delinquent” in its defence spending. The US President was also caught on a hot mic when leaving the London saying it was “funny when I said that guy was two-faced.”

On Friday news broke that Canada had lost over 72,000 jobs in the month of November, many Canadians losing their jobs just before the holiday season. The job loss was the biggest in Canada since the 2008 financial crisis.

Trump has been boasting throughout the day about the great jobs report in America and appears to have not forgotten Trudeau talking about him behind his back in London.

Many political experts have said that Trudeau being caught laughing behind Trump’s back could have untold consequences for Canada relationship with the US, especially if Trump is reelected in 2020.