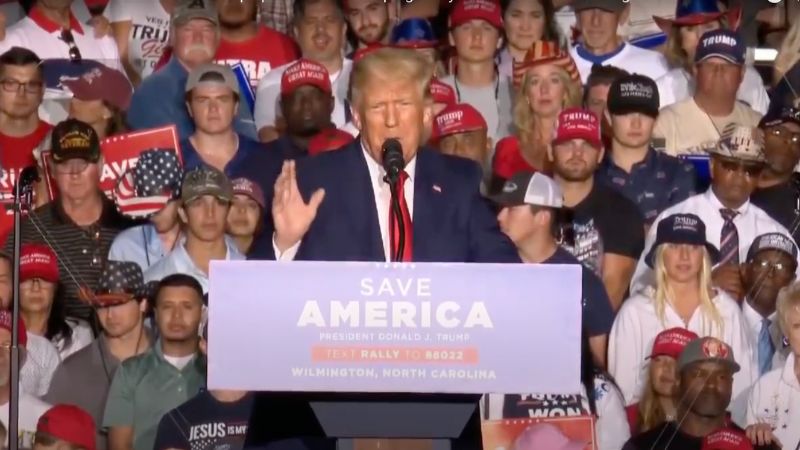 Olivia Rondeau
Sep 24, 2022 minute read
ADVERTISEMENT
ADVERTISEMENT
Former President Donald Trump held a rally in North Carolina on Friday, seeking to build support for his endorsed candidates in the upcoming midterm election, urging the crowd to "vote Republican" to stop "the destruction of our country."

"This election is a referendum on Biden, Pelosi, Schumer, the radical left Democrat Congress that’s destroying our country, that’s brought our country really to the brink of ruin," Trump said, drawing cheers from the large crowd.

"If you want the decline and fall of America, then you should vote for the crazy, radical left Democrats," Trump continued, adding that putting Republicans back in charge would "save the American dream" and stop "the destruction of our country."

In a pat on the back to "the great" Rep. Ted Budd, who is running for a US Senate seat, Trump called for the end of "crazy Nancy Pelosi's political career once and for all."

On inflation, Trump juxtaposed the relatively lower costs that the country saw during his term to the soaring prices of everyday items under the Biden administration.

"We had the greatest success in the history of any country," Trump said.

"Since I left office, the price of electricity is up 19 percent, gasoline is up 82 percent, fuel is up 91 percent," he added, highlighting the highest inflation the country has suffered through in 40 years.

"The 30-year mortgage rate has more than doubled and real wages have declined 17 months in a row—otherwise we’re doing quite well," Trump added, garnering laughter from the audience.

Slamming Biden, along with the rest of his party, Trump called them "arsonists," who are figuratively burning the nation.

"Joe Biden and the Democrat arsonists do not care one bit about the pain and suffering they're causing you, your family, or our once great country," he said.

On being sued by New York Attorney General Letitia James over fraud allegations, accusing her of being "racist" and committing "prosecutorial misconduct."

"There's no better example of the left's chilling obsession with targeting political opponents than the baseless, abusive and depraved lawsuit against me, my family, my company, by the racist Attorney General of New York State, Leticia 'Peekaboo' James," he said, garnering boos from the crowd when he named the AG.

"Her only goal is 'we gotta get Donald Trump. We're gonna get him,'… Before she had even begun her phony investigation, she went around boasting her plan to weaponize her office against me — probably working with the federal government, of course — declaring 'I look forward to going into Office of Attorney General, New York State, every single day, and suing him.'"

"This is prosecutorial misconduct," the former president added.

Speaking of the future, Trump imposed some hope on the crowd, saying "We are going to drain that damn swamp... I did a hell of a job, but that sucker is deep!"