"We don't have freedom anymore and Liz Cheney is really in charge." 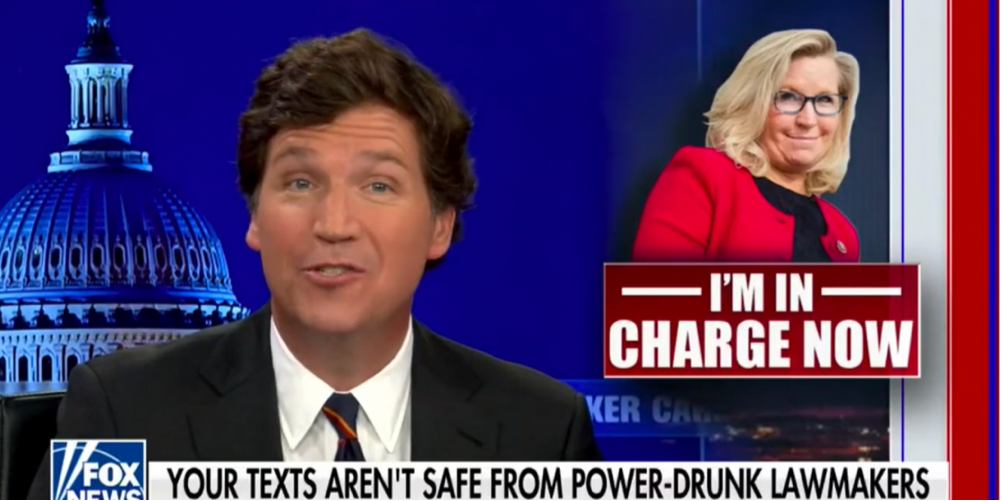 Fox News host Tucker Carlson discussed in a segment on Tuesday why Congresswoman Liz Cheney (R-WY) was demanding text messages for the January 6 Committee and that the texts she acquired from Fox News anchors undercut her point.

"We don't have freedom anymore and Liz Cheney is really in charge," Carlson said.

"Yesterday in case you missed it, Liz Cheney found herself with a list of text messages to and from Mark Meadows. meadows was Donald Trump's last White House Chief of Staff. Those text showed no evidence of any crime whatsoever but since she had them, Liz Cheney thought they might be embarrassing to conservatives so she read them out loud," Carlson continued.

"Some of those texts were from anchors here at Fox News and Liz Cheney took special delight in reading those," Carlson added. "We now live in a country where none of your private communications are safe from the eyes of power drunk politicians like this Cheney."

Liz Cheney can harness the power of the national security State to seize your personal text messages and then read them into the congressional record. So your texts, effectively your daily diary, belong to Liz Cheney," Carlson explained. "The question that all of us, no matter who we voted for, have to ask ourselves is, 'Do we really want to live in a country like that?'"

"Privacy isn't just a nice thing to have, privacy is morally essential. Privacy is a pre-requisite for freedom. You can't have liberty without privacy and that needless to say is the whole point of the spectacle, to let you know that we don't have freedom anymore and Liz Cheney is really in charge."

The Fox News host said the January 6 committee hearing is nothing more than a "show trial" is because the text messages that Liz Cheney read didn't make her case, they undercut her case.

"Three Fox anchors sent text messages to Mark Meadows and none of them cheered what was happening at the Capitol on January 6. In fact, they were upset by it even in private when they knew no one was listening," Carlson explained. "that shouldn’t surprise you. These are principled people and what they say in public is not that far from what they say over text message."

"So Fox anchors on TV and in private opposed the BLM riots in the summer of 2020. Fox anchors opposed the riot on Capitol Hill in January 2021. It turns out that Fox anchors oppose riots. All riots! No matter who is rioting," Tucker Carlson said. "We're the only news anchors in the United States of America who do this. The other channels wait to see who the rioters voted for and then they respond accordingly."

"So the texts that Liz Cheney read aloud yesterday were a tribute to the people who wrote them. But because she is a liar, Liz Cheney attempted to twist these texts into proof of some kind of conspiracy, part of the insurrection story line which is getting old," the Fox News host added.