Ukraine partnered with FTX as the Biden administration funneled funds to the invaded nation, and FTX then made massive donations to Democrats in the US. 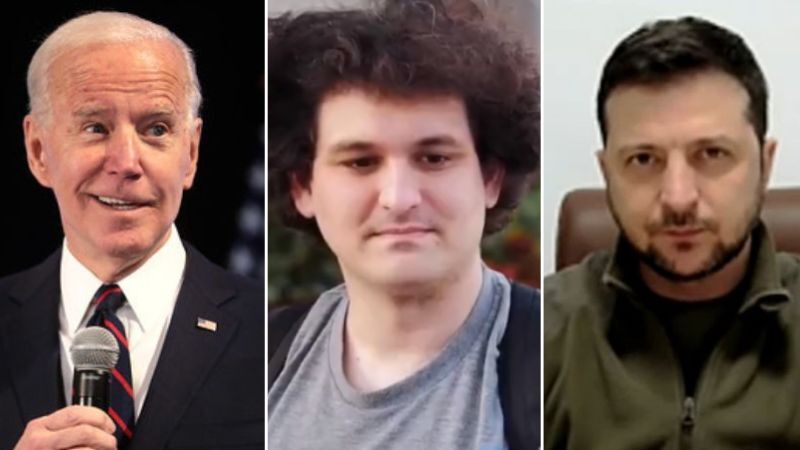 The multi-billion dollar cryptocurrency company FTX, run by CEO Sam Bankman-Fried, the second biggest Democrat donor right after George Soros, collapsed last week as details emerged regarding their financial practices, which led to a run by customers on FTX. FTX did not have the funds to pay out.

It was also revealed that FTX had partnered with Ukraine to process donations to their war efforts within days of Joe Biden pledging billions of American taxpayer dollars to the country. Ukraine partnered with FTX as the Biden administration funneled funds to the invaded nation, and FTX then made massive donations to Democrats in the US.

An article from the cryptocurrency news website Coindesk from March 15, 2022 reported that Ukraine partnered with FTX, and that "FTX is converting crypto contributions to Ukraine’s war effort into fiat for deposit at the National Bank of Ukraine." Fiat is the legal tender or paper money of a particular country.


Bankman-Fried made donations to the Dems that totaled $39.8 million, putting him just behind George Soros and his $128 million in donations for the 2021-22 cycle. Bankman-Fried became a significant donor to Biden starting in 2020.

He was the largest financial contributor to the Protect Our Future PAC, "the political action committee which endorsed Democratic candidates such as Peter Welch, who this week won his bid to become Vermont’s next senator, and Robert J. Menendez of New Jersey, who secured a House seat."

As Bloomberg reports, Bankman-Fried had his net worth go from $15.6 billion to $1 billion in "the biggest one-day collapse it had ever seen among billionaires" over the weekend, a personal loss of funds that coincided with FTX's implosion.

It is expected that Bankman-Fried will go bankrupt in the face of a liquidity crunch and the abrupt change in financial status, and he has already filed for Chapter 11.

FTX lost roughly $1 billion of customer funds and the money "vanished," causing federal regulators to look into the company. The investigation will be conducted to determine the extent of harm to clients and what laws FTX may have broken, though FTX is not based in the US, a move that makes it possible for FTX to skirt US financial regulatory laws.

"FTX is under investigation by the US Securities and Exchange Commission (SEC) regarding the management and handling of client funds. With this latest development, FTX has more questions to answer as scrutiny builds around the SEC investigation," Cryptoslate reports.

Roughly $5 billion was withdrawn from FTX on Sunday. The trouble began for FTX last week when rival crypto company Binance said they were selling off their holdings of FTT, which is the proprietary coin of FTX. After Binance said that, FTX was in financial trouble, and essentially sought a bailout from other firms, Binance among them.

The New York Post reports that FTX's implosion followed revelations "that co-founder Sam Bankman-Fried had been funneling money to a sister trading company run by his girlfriend." That company, Alameda Research, is run by Bankman-Fried's girlfriend, Caroline Ellison, and is also based in the Bahamas.

Binance announced that they would buy the company, then pulled out of the deal, saying that after some due diligence, they decided it would not be a good investment. "As a result of corporate due diligence, as well as the latest news reports regarding mishandled customer funds and alleged US agency investigations, we have decided that we will not pursue the potential acquisition of http://FTX.com," Binance said on Twitter.

"In the beginning, our hope was to be able to support FTX’s customers to provide liquidity, but the issues are beyond our control or ability to help. Every time a major player in an industry fails, retail consumers will suffer. We have seen over the last several years that the crypto ecosystem is becoming more resilient and we believe in time that outliers that misuse user funds will be weeded out by the free market. As regulatory frameworks are developed and as the industry continues to evolve toward greater decentralization, the ecosystem will grow stronger," Binance said.

Part of the issue for Binance is that Alameda Research, helmed by Bankman-Fried's girlfriend, holds a great deal of their assets in FTT, and FTX had invested their customers' funds into Alameda through a "back door," without oversight. "Late on Friday evening, it has since been confirmed that a total of around $10 billion was moved from FTX to Alameda Research by FTX founder Sam Bankman-Fried (SBF)," Cryptoslate reported. Bitcoin Archive tweeted this out, which Cryptoslate noted was "used to move assets in the billions of dollars without triggering alerts to staff and external auditors."

"It’s fascinating to see that the majority of the net equity in the Alameda business is actually FTX’s own centrally controlled and printed-out-of-thin-air token," said Cory Klippsten, CEO of investment platform Swan Bitcoin.

This led to a run on FTX by customers, revealing that FTX did not have the funds to pay out.

With billions of customers' money missing, it's been revealed that top Democrat donor and FTX founder Sam Bankman-Fried is in the Bahamas, where FTX is based. Additional reports are that the FTX execs are seeking a way to Dubai.

This article has been revised to reflect FTX's claim that they partnered with Ukraine.
ADVERTISEMENT
ADVERTISEMENT
Biden SBF Ukraine