"She came home from school and was showing us her yearbook," Poll explained. "She said 'There’s my team and there’s my friends and I’m not included.' She was devastated." 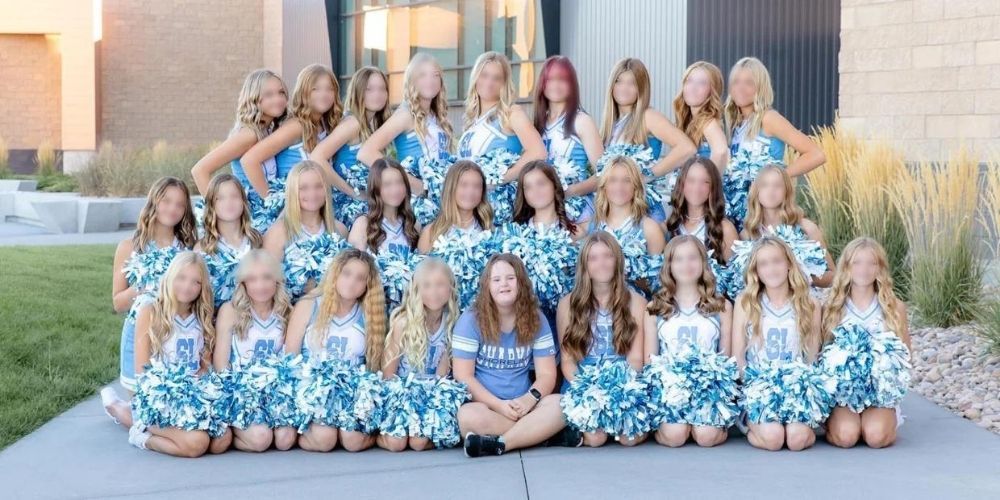 The cheer squad at Shoreline Junior High School in Utah omitted a photo of a squad member with Down syndrome, excluding her from the 2020-2021 yearbook.

14-year-old Morgyn Arnold was devastated when she received her class yearbook and found out that the squad she loved so dearly submitted a photo to the yearbook that excluded her from the team.

"Think back to your school days — yearbook day was so fun and exciting," Arnold’s sister Jordyn Poll told TODAY Parents. "Morgyn was so excited to go to school and get her yearbook."

"She came home from school and was showing us her yearbook," Poll explained. "She said 'There’s my team and there’s my friends and I’m not included.' She was devastated."

Two photos were taken of the Shoreline Junior High School cheer squad on picture day. The first photo included Arnold while the second did not. The school decided to submit the photo that failed to include Arnold for the yearbook.

In a social media post that has since gone viral, Poll posted side-by-side photos of the cheer squad detailing the pain caused to her "spunky, caring, and beautiful" sister.

"The first picture you see is a cute junior high cheer team. The second, although similar, includes all members of the team. It’s the SAME cheer team–SAME girls, SAME photo shoot, SAME poses, but one included all team members and one did not."

"Unfortunately, the first one was posted on the school’s social accounts and in the school yearbook. Additionally, Morgyn’s name wasn’t even mentioned as a part of the team. She wasn’t included. She spent hours learning dances, showing up to games, and cheering on her school and friends but was left out."

According to Poll, this is not the first time Shoreline Junior High School excluded her sister with Down syndrome from the yearbook. Two years ago they allegedly didn’t include Morgyn in the class list.

In a now deleted statement posted to the school’s Facebook page that Poll shared with TODAY Parents, Shoreline Junior High School expressed their remorse. "We are deeply saddened by the mistake that was made," the statement read. "We are continuing to look at what has occurred and why it occurred. Apologies have been made to the family and we sincerely apologize to others impacted by this error. We will continue to address it with the parents of the student. We will continue to look at our processes to ensure this does not happen again."

Poll hopes the school will become more transparent so the family can find out exactly what happened. "I'm grateful that we raised the awareness so that the school took it seriously," Poll said. "They didn’t have any immediate answers, but I’m excited that they are taking the time to now look into it. I hope the answers will continue to come."

The cheer squad, as well as the school, suspended all social media accounts due to the backlash. Poll made it clear that the girls on the squad shouldn’t be blamed for the actions of administrators.

"I think this is probably one of the saddest pieces," Poll shared. "There’s been so much hate directed to these other girls and it’s so unnecessary. They are kind and did their very best to include Morgyn and make her feel like she belongs and they continue to do so and continue to reach out and let her know that she is loved. If it was up to them, they would have included her in the photos."

The family hopes the incident will spark change and bring awareness to the obvious discrimination. "My hope is that we can learn from this situation and learn from the mistakes that happened and we can just try a little harder to be a little better," Poll said. "Being better isn’t about turning around and pointing fingers and causing blame. They’re just as important as Morgyn. We don’t need to forget that in this process. We should be able to raise awareness and fight for what's right without getting cruel."

Poll said that despite the cruel intentions of the administration, her sister Morgyn remains in good spirits. "I think a lot we can learn from her example," Poll said. "She’s forgiven them and moved on. She’s sad, when she looks at the pictures. Her example speaks a lot, and she’s excited to continue to find memories and continue cheering."