New footage released on Wednesday reveals the moments leading up to when Ashli Babbitt attempted to pass through the broken glass of a barricaded interior door leading into the Speaker's Lobby. 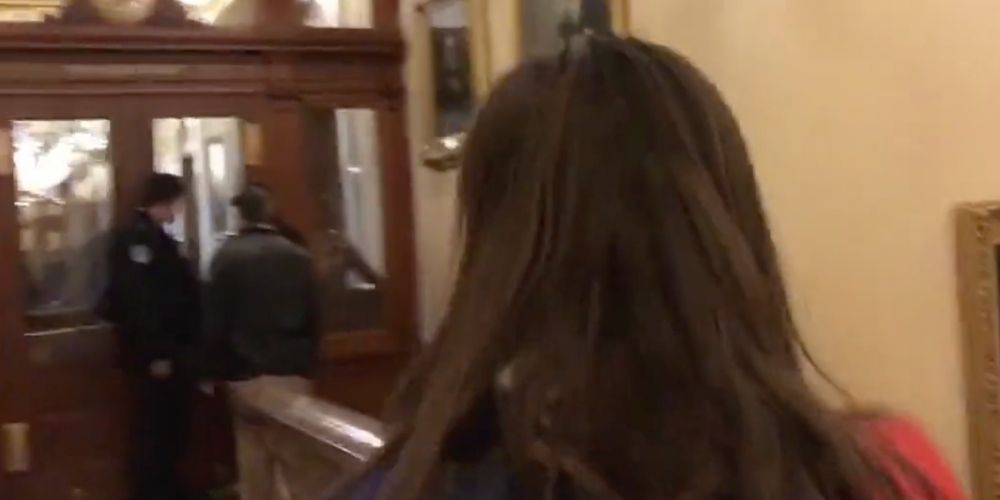 New footage released on Wednesday reveals the moments leading up to when Ashli Babbitt attempted to pass through the broken glass of a barricaded interior door leading into the Speaker's Lobby.

The footage, taken by independent journalist Tayler Hansen, shows Babbitt walking through the building, approaching the door guarded by three police officers at around 2:40pm. She is seen conversing with the officers.

"I’m hoping that over a year later my video helps clear up what really took place outside the Speakers Lobby on January 6th," Hansen told The Post Millennial.

"We didn't know anything about the building we were in. She turned the corner and I just followed her," Hansen told The Epoch Times. "A big group of people followed us after I followed her. People just kind of emerged on the door. By that time, she was stuck in the corner. She was literally trapped there."

"About five minutes prior to her getting shot and killed, all of those officers, Officer Yetter and the other officers in the hall, the MPD cops, they were all joking with her and laughing with her," Hansen said. "They were having conversations and joking and laughing. Then not even five minutes later, Michael Byrd comes and executes her."

The Epoch Times, who analyzed video and audio files of the shooting, state that Babbitt attempted to stop the attack on the Speaker's Lobby leading up to her shooting.

"Babbitt confronted rioter Zachary Alam, leaning in between him and one of the police officers guarding the doors. Alam turned away from Babbitt and punched a window to the side of the officer's head. Babbitt winces just before Alam strikes the window with his right hand. He later uses a helmet to smash the tempered glass," The Epoch Times reported.

According to Babbitt's husband, Aaron Babbitt, an audio analysis of video footage taken in the hallway reveals that Babbitt shouted, “Stop! No! Don't! Wait!”

"After repeatedly forcing myself to watch the murder of my wife, I have come to my own conclusion that Ashli came to a point of realization that she was in very bad situation and the police weren't acting appropriately to what she was witnessing," Aaron Babbitt told The Epoch Times.

"I know my wife very well. She's not destructive," Babbitt said. "She was not there to hurt anybody."

The three officers that were standing in front of the door are seen at one point moving away, as a US Capitol Police Containment Emergency Response Team came up the stairs responding to a police radio report that shots had been fired, though no shots had been fired at that point.

"Babbitt feared for her life, her husband said, so she climbed into the broken window to escape. Byrd shot her before she got more than partway into the window frame," The Epoch Times reported.

"The only way we'd ever know why Ashli felt the window was the only way out is if she had been detained by one of the countless police officers that abandoned their post in front of those doors," Babbitt said. "That did not happen. She was murdered and robbed of the chance to tell her side of the story."

Hansen and John Sullivan, also known as Jayden X and who was also at the doors filming, stated that they did not hear any warnings from inside the Speaker's Lobby before the shot was fired, though the protestors on the other side of the door were loud, potentially masking the warnings.

"There were conflicting accounts from police officers on both sides of the barricaded door as to whether warning instructions were given before Byrd fired on Babbitt," The Epoch Times reported.

"I began yelling: 'Hey, there's a gun! He's got a gun!" Hansen said. "But nobody could hear us. I could barely hear John Sullivan and I was right next to him, because people were screaming and windows were breaking."

"Since there was a gun, I got on the ground because I didn't know what was going on," Hansen said. "I figured I'm going to get as low as possible in case there's any ricochets or any misfires or anything like that. I had my Kevlar vest on, which I always wear when I report."

"We tried to warn people and they couldn't hear us—and we were screaming," he added.

Hansen said Alam, the one who shattered the window that Babbitt attempted to enter through, intended to breach the Speaker's Lobby, but did not enter through the window before Babbitt because he needed to adjust his glasses.

"He was about to go through that window," Hansen said. "It was his idea. He was the one shattering it."

In a statement to The Post Millennial, Hansen said: "For over a year Ashli Babbitt has been demonized as a 'domestic terrorist' by MSM and the Federal Government. This couldn't be farther from the truth considering Ashli was actively trying to interfere with Zachary Alam and others who were breaking windows."

"At one point she actually yelled at the officers to 'call for f*cking help.' She was visibly frustrated with the lack of Police response to the incident, was extremely claustrophobic, and felt she could resolve the situation herself," he continued.

"The combination of these three factors seemed to lead her to believe that if she got on the other side of the window she could do the Officers jobs for them. This is when Michael Byrd stepped out of hiding with no verbal warning and shot Ashli Babbitt in the left anterior shoulder killing her," Hansen added.