Reps. Alexandria Ocasio-Cortez, Rashida Tlaib, Scott Phillips, and other members of the Democratic Party spoke on the house floor on Thursday night, sharing their stories from the Capitol Hill riots that took place one month ago. 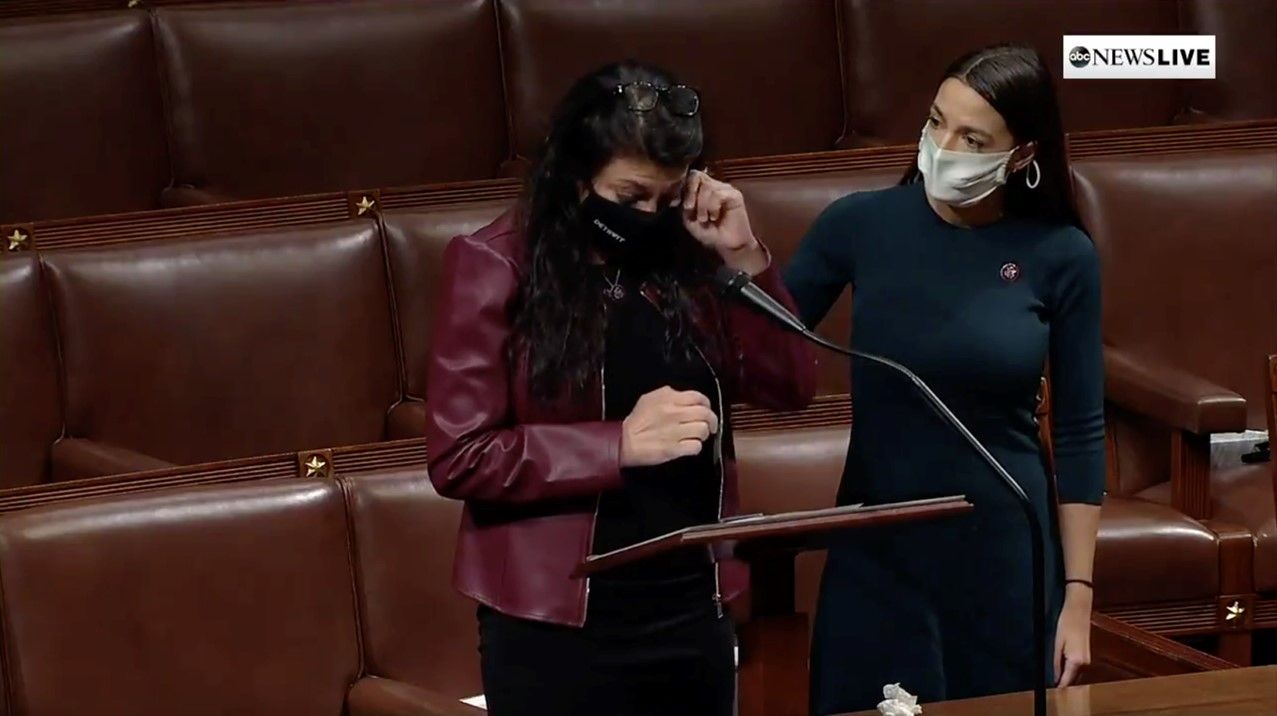 Reps. Alexandria Ocasio-Cortez, Rashida Tlaib, Scott Phillips, and other members of the Democratic Party spoke on the house floor on Thursday night, sharing their stories from the Capitol Hill riots that took place one month ago.

Ocasio-Cortez's statements started by paying tribute to the two officers and four others who lost their lives during the riots, saying the events were incited by former President Donald Trump.

"Some are already demanding that we move on, or worse, attempting to minimize, discredit, or belittle the accounts of survivors. By doing so, they not only harm those who were there that day, and provide cover for those responsible, but they also send a damaging message to survivors of trauma all across this country; that the way to deal with trauma, violence, and targeting is to paper it over and move on."

Ocasio-Cortez would go on to compare all survivors of trauma to the experiences on the Capitol.

"We know what it feels like thinking that its a real possibility that we would to see our families and loved ones again. We won’t forget… I’m not here this evening seeking sympathy or just to tell my story, rather to make a public apology for recognizing that we were sitting ducks in this room as the chamber was about to be breached, I screamed to my colleagues to follow me to the republican side of the chamber so we could blend in," said Phillips, saying that the "insurrectionists" would "spare us if they simply mistook us for Republicans."

Phillips said, through tears, that he apologized to those in congress of color who could not blend in with the mostly white Republicans.

Rep. Rashida Tlaib's comments were even more tearful, as she recounted stories of previous death threats to conclude the session.

"This is so personal," Tlaib started. "This is so hard because, as many of my colleagues know, on my very first day of orientation I got my first death threats. It was a serious one, the FBI had to go to the gentleman’s home. I hadn’t even been sworn in yet."

Tlaib would go on to list other instances where her life was threatened.

"I feel bad for Alexandria and many of my colleagues who were here. And as I saw it, I thought ‘thank God I am not there.’ I saw the images that they didn’t get to see until later."

"It paralyzed me, and all I wanted to do was serve the people that raised me."

"It’s hard when my seven brothers and six sisters pegged me to get protection, many urging me to get a gun for the first time. And I have to tell you, the trauma from just being here existing as a Muslim is so hard, but just imagine my team which I lovingly just adore, they are diverse. I have LGBTQ staff, I have a beautiful Muslim who wears her hijab proudly in the halls, I have black women who are so glad to be here to serve their country. And I worry every day for their lives, because of this rhetoric,” Tlaib said.