The pig head was decorated with a police officer's hat, referencing the epithet "pig" frequently used to describe police by far-left anti-police activists and protesters. 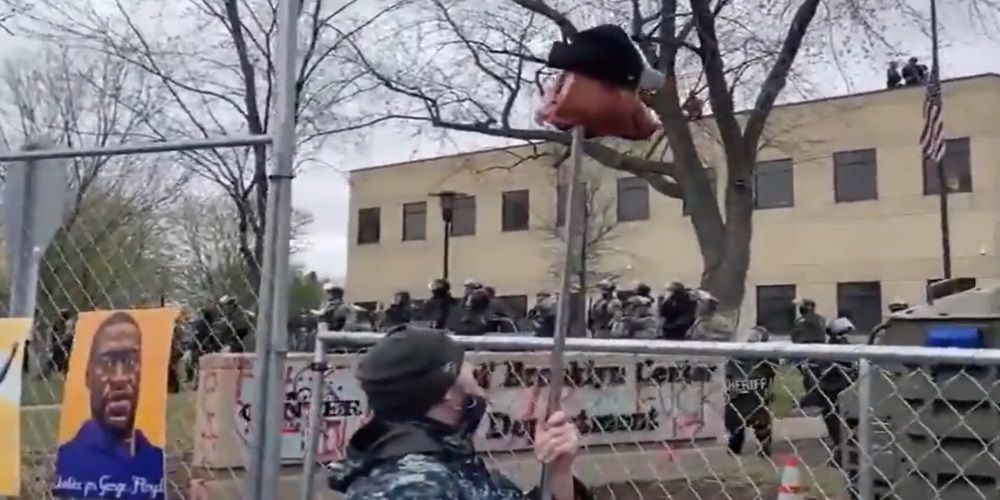 A man displaying the severed head of a pig on a pike joined the protests in Brooklyn Center, Minn. on Wednesday night. The pig head is a reference to police officers.

The pig head was decorated with a police officer's hat, referencing the epithet "pig" frequently used to describe police by far-left anti-police activists and protesters.

"You're a worthless sack of sh*t," the pike holder could be heard yelling through fencing at police. "What the f*ck is a sheriff doing in an armored car?"

While some protesters expressed amusement with the peculiar protest material, others were not so amused by the gruesome display. One woman can be seen in the video slapping the pig head-carrying man multiple times.

The man was later interviewed by Fox News, during which he described the police as "terrorists" and called for their abolition. He said he was a veteran.

Rioting and looting broke out in the Twin Cities suburb of Brooklyn Center on Sunday night after Daunte Wright, a black man, was killed by a police officer, Kim Potter, who claimed to have mistook her gun for her taser while attempting to subdue the man. While Potter has been charged with second degree manslaughter, many have questioned how it is possible for a 26-year veteran of the force to make such a catastrophic mistake, with some even speculating that it was no mistake at all.

The looting has since subsided according to police, with some protesters continuing to be arrested for rioting.

The riots were the first to overtake the Twin Cities since the killing of George Floyd last year in Minneapolis while under the knee of Derek Chauvin, another police officer. Chauvin is currently on trial for second degree unintentional murder and third degree murder.