WATCH: Milwaukee man mobbed by BLM activists—arrested for trying to defend his home

Activists in Milwaukee, Wisc. staged a protest at a neighbour's home on Monday, alleging that he was racist. Police were called when the man could be seen holding a gun, and the he was arrested. 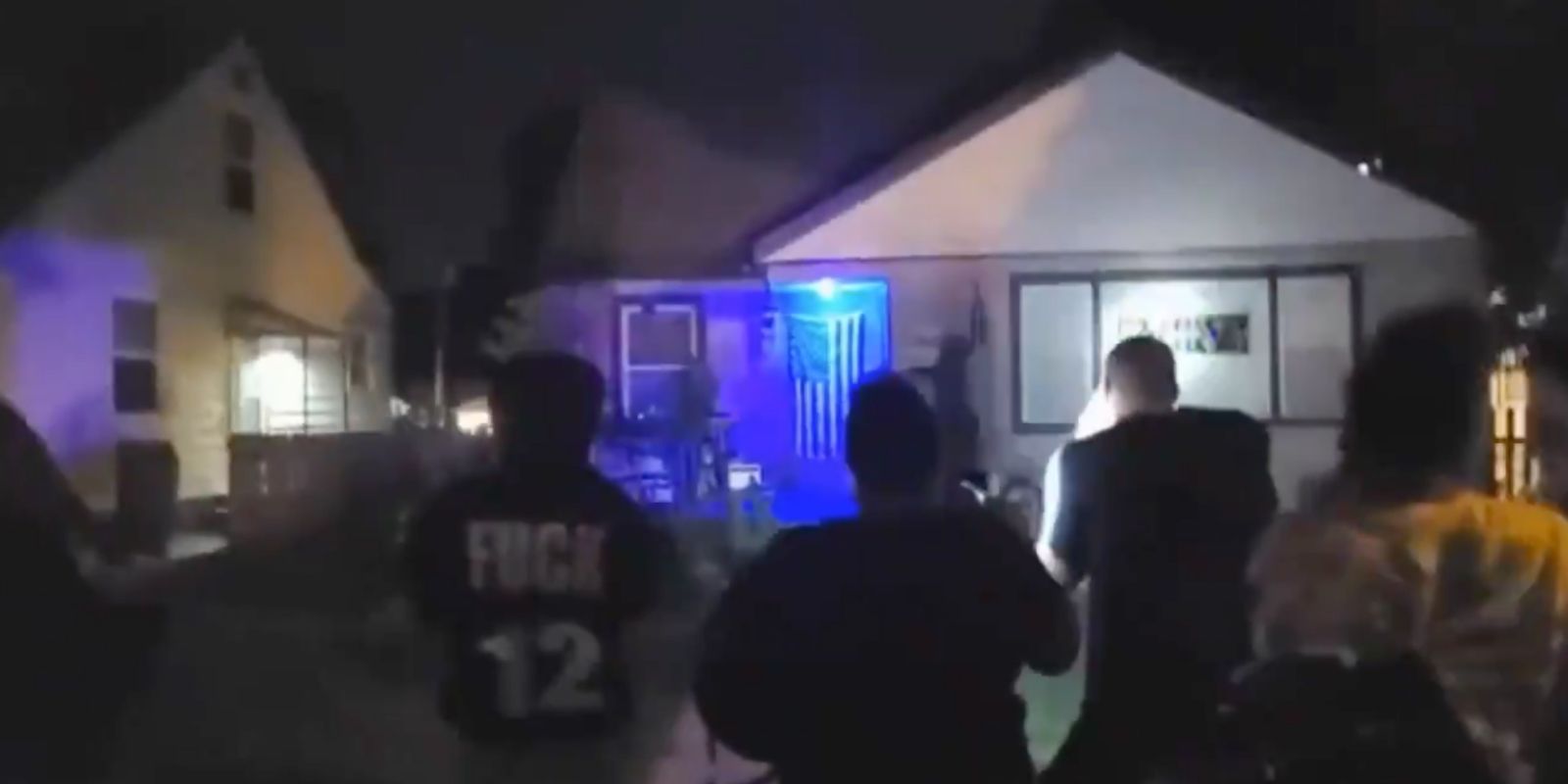 Activists in Milwaukee, Wisc. staged a protest at a neighbour's home on Monday, alleging that he was racist. Police were called when the man could be seen holding a gun, and then he was arrested. The story was reported on Twitter by Kitty Shackleford.

As the crowd watches, laughs, and sings "you about to go to jail," an officer enters the man's home and seconds later escorts him out in handcuffs. The crowd goes exuberantly wild with applause and cheers.

"You about the go to jail," a voice calls out over a megaphone, while other activists scream "F*** you, Pete," and "Don't arrest me, arrest 'Pistol Pete!'"

After the man was removed from his home, the crowd remains, playing music, laughing, and joking that the man was now "Parole Pete." This was his third nickname of the evening after "Pushy-a** Pete" and "Pistol Pete."

A Black Lives Matter banner lays in the street, and a BLM fist cutout is present, while an American flag can be seen hanging near the man's front door.

Organized on Facebook, and with the intention of holding a "protest party," Vaun L. Mayes planned the gathering in front of his neighbour's home. He collected donations to prep for the festivities. The belief that the man is racist appears to have been inspired by a 15 second video shot by children and posted to Facebook.

The scene before the arrival of the police is a party, with music, laughter, and both adults and children dancing in the streets. Many people shoot the man's home with cell phones. No one in the crowd seems at all intimidated or afraid of the man they are protesting, rather it is a scene of exuberance.

The confrontation came to a head when the activists called the man out directly. Lights are shone on his home, which dons an American flag and an "all aboard the Trump Train" sign.

The activists turn their attention on the home, the music no longer plays, as activists address the man with their full voices or with the use of a megaphone.

"Everybody believes the babies," a voice says over a megaphone.

The man can be seen inside, holding his gun, as the activists call him out by name.

"Hey Pete!" The voice over a megaphone calls out.

"Y'all see him!" Another man says.

"I don't think you know what's out here, buddy. I care about you, I don't want you to find out."

"So he's pointing his shotgun out the window," another narrator says.

"Ain't no bullets in that motherf***er," the man on the megaphone says.

"Look at that crazy motherf***er."

"I gotta get you a new nickname, now" the megaphone man says. "Pistol Pete!" He laughs.

"In all seriousness, Pete, we are not intimidated by you in the window good buddy. 'Cause I don't think you understand what's out here man, I keep trying to tell you. That's all I'm saying man." And he laughs.

"I don't think you want that, good buddy. You heard what [unintelligible] said there's more than meets the eye. Right now your eyes ain't letting you see what's calling at you, so I would suggest... is that your wife again?" he asks.

A 15 second video was shared to a a Facebook group called The New Milwaukee (Peaceful protests for change) on September 7 which appeared to be the impetus for making this man's house a stop on his Justice Tour 2020.

The clip is a blurry, hard to hear video shot by kids on a cell phone. Over the sound of sucking candy and the kids' commentary and uncertainty about what's going on, a man can be seen yelling from the sidewalk to his neighbour, who is standing in their front door, obscured by a screen, wearing a pink shirt.

Along with the video, was the caption: "Neighborhood kids already were scared to go by this mans house due to his Trump sign and his confederate flag in the window... Now these kids really don't wanna ride their bikes in the area. People just moved in next door and have to live next to this ignorance. Police showed up and he ran in the house and peeked out the windows after calling the new neighbors the N word."

The confusing tangle of events appears to be that children on their bikes shot a short, barely audible, blurry video of a man from across the street. In that video, the "n-word" can maybe heard near the end, but there is not context at all. That video was shared to Facebook, where the cause of the "racist neighbour" was taken up by a group of activists determined to root out racism in establishing their vision of a "new Milwaukee."

The group organized a "protest party" outside the man's home despite their having no fear of him or for their own safety. When he appeared prepared to defend himself and his home, the group called in law enforcement to remove the man, though they stated their belief that his gun was not loaded. They then continued the festivities.