"I got this message this morning from Bono," Pelosi said, before reading his words. "Ireland's sorrow and pain is now the Ukraine and Saint Patrick's name is now Zelenskyy." 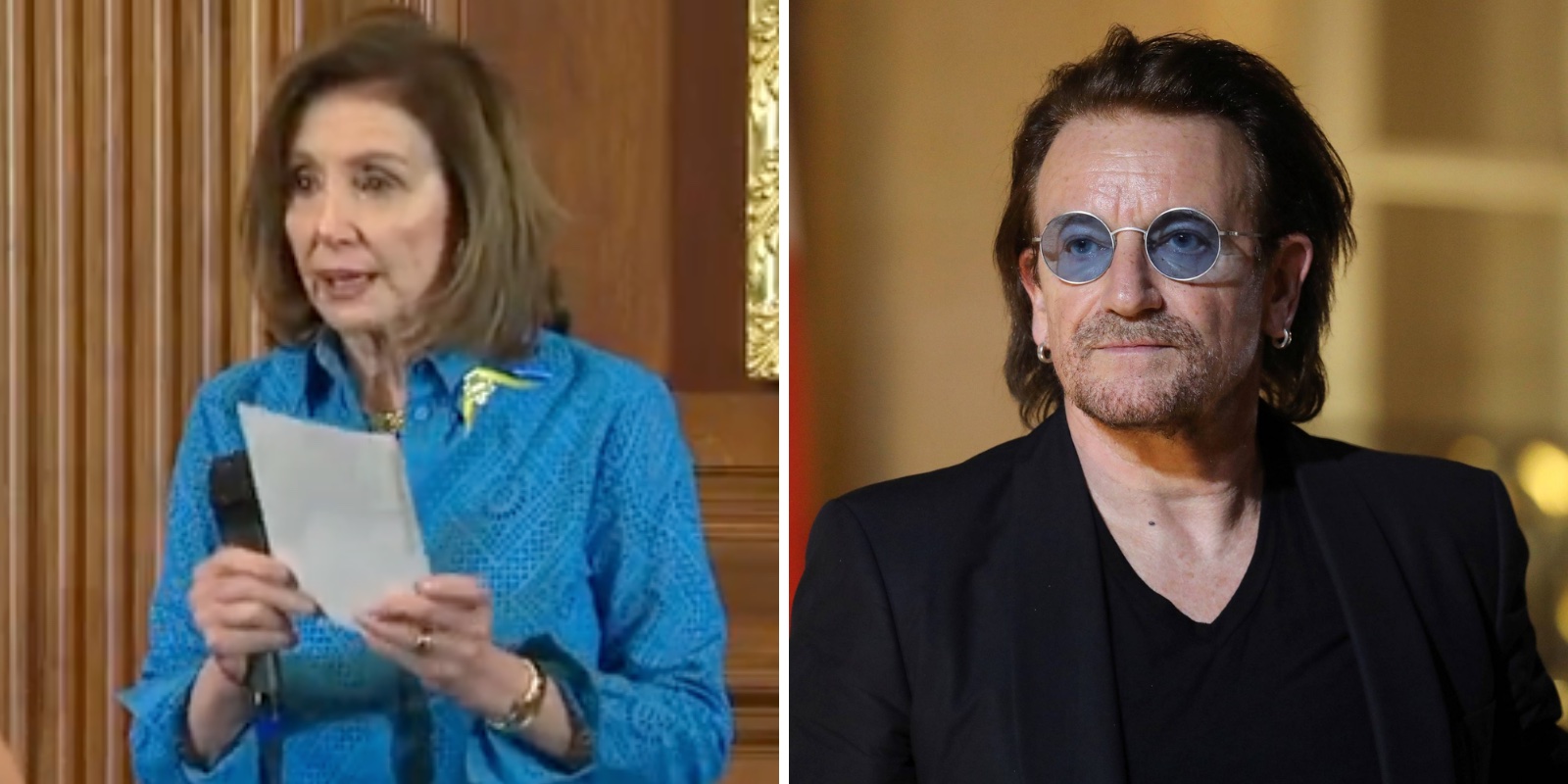 While addressing reporters on Thursday morning, House Speaker Nancy Pelosi said that the Biden administration and Congress is doing "everything we can to minimize the Putin price hike."

Pelosi also promised to read a poem about Ukraine written by U2's Bono during a Friends of Ireland luncheon today. And she did. "I got this message this morning from Bono," Pelosi said, before reading his words.

"Ireland's sorrow and pain is now the Ukraine and Saint Patrick's name is now Zelensky."

Ukraine's President Zelensky addressed the US Congress on Wednesday, to cheering and standing ovations from Pelosi, among others. She said that "Bono has been a very Irish part of our lives."

"Oh Saint Patrick, he drove out the snakes with his prayers, but that's not all it takes. What the smoke symbolizes is an evil that arises and it hides in your heart as it breaks. And the evil from [unintelligible] from the darkness that lives in some men but in sorrow and fear, that's when saints can appear, to drive out those old snakes once again. And they struggle for us to be free from the psycho in this human family. Ireland's sorrow and pain is now the Ukraine and Saint Patrick's name is now Zelensky," she read, to the laughs and applause from the lunching crowd.

Since the beginning of the year, the national average of gas prices have gone up around $1 per gallon, according to data from Gas Buddy.

Before that though, throughout the weeks leading up to Biden’s inauguration and through his first year, the price went up nearly $1 per gallon in that time span.

Biden has expressed similar sentiments in speeches given in recent weeks, saying that "the decision today is not without cost here at home," in reference to the ban on Russian oil imports.

"Putin's war is already hurting American families at the gas pump. Since Putin began his military buildup on Ukrainian borders, just since then, the price of the gas at the pump in America and 75 cents. And with this action, it's going to go up further. I'm going to do everything I can to minimize Putin's price hike here at home," Biden stressed.

Biden and administration officials have urged that rather than ramping up domestic oil production, the time should be used to pivot towards alternative clean energy options.

"I’ve had numerous conversations over the last few months with our European friends of how they have to wean themselves off of Russian oil it's just not, it's just not tenable. It should motivate us to accelerate the transition of clean energy," said Biden during the oil import ban announcement.

Biden claimed that loosening environmental regulations or pulling back clean energy investments "will not lower energy prices for families."

"Transforming our economy to run on electric vehicles powered by clean energy, with tax credits to help American families winterize their homes and use less energy, that will, that will help. And if we can, if we do what we can, it will mean that no one has to worry about price of gas pumping the future," said Biden.