WATCH: Protestor arrested after throwing can at Ted Cruz

A 33-year-old man has been charged with assault after throwing White Claw cans at Senator Ted Cruz during the World Series parade in Houston. 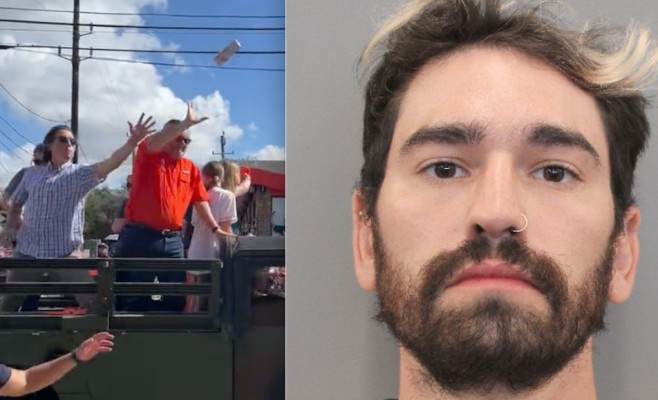 Alex Timothy
Nov 8, 2022 minute read
ADVERTISEMENT
ADVERTISEMENT
A man has been charged with assault after throwing White Claw cans at Senator Ted Cruz during the World Series parade in Houston on Monday.

Senator Cruz was riding on a vehicle and waving at the crowd celebrating the Houston Astros's World Series victory over the Philadelphia Phillies when the assault took place, according to NBC News, "The beer can struck the Senator in the chest/neck area," according to police.

Click2Houston.com reports that two unopened 12oz beverage cans were thrown, one of which struck Sen. Cruz in the chest. The Senator did not require any medical attention, and was joking about the incident on Twitter later in the day.

"As always I'm thankful for the Houston Police and Capitol Police for their quick action." He then added "I’m also thankful that the clown who threw his White Claw had a noodle for an arm."

The assailant, who has been identified as 33-year-old Joseph Halm Arcidiacono, was arrested and charged with aggravated assault. Court documents state that his bond was set at $40,000 and that he has been released from custody.

A witness who was standing approximately 15 feet behind Cruz observed Arcidiacono rush towards the barrier and throw the two cans directly at the Senator. According to prosecutors, the witness was able to apprehend Arcidiacono as he was attempting to run away and escort him to authorities.

He allegedly said to officers as he was being detained "I know, I'm an idiot, I'm sorry".

This is not the first time that Republicans have been attacked in the run up to the midterm elections. New York gubernatorial candidate Lee Zeldin was attacked at a campaign event in the summer. Then just last week, a Zeldin supporter was attacked at a rally for his opponent.