"I am proud that when Democrats got control a year and a half ago, Democrats voted for the American Rescue Plan that helped our kids get back into school safely," Senator Patty Murray said. 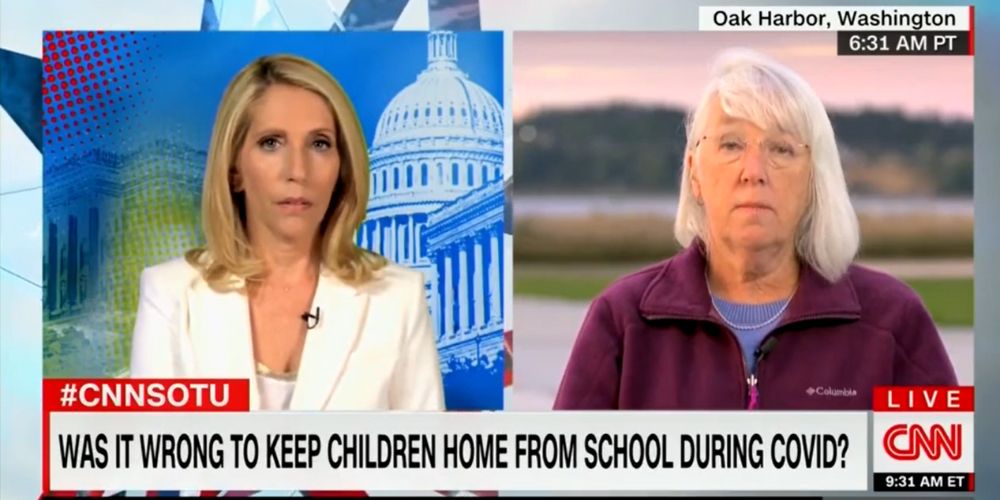 Washington’s Democratic Senator Patty Murray told CNN she was "proud" of how Democrats handled getting kids back into classrooms during the COVID-19 pandemic and defended school closures while acknowledging the impact the disastrous policy has had on children.

While on the network’s "State of the Union," host Dana Bash asked Murray if it was a "mistake" to keep students home for so long, referencing the Department of Education report released Thursday on the country’s tanking test scores, which revealed losses for students in all demographics across the country.

Those statistics included reading scores in 2022 for 9-year-olds dropping by 5 points and math scores going down by 7 compared to 2020 which according to the department was "the largest average score decline in reading since 1990, and the first ever score decline in mathematics."

"I am proud that when Democrats got control a year and a half ago, Democrats voted for the American Rescue Plan that helped our kids get back into school safely – making sure that our schools had testing, and supplies, and ventilation, and the ability to make sure their kids could be safe at school. And today, virtually every child is back in school. That is what I focused on, making sure that we were providing the resources to our schools so they could reopen safely, and that’s what we have today."

Murray added, "we have an issue about kids being out of school," and that she is "very focused… on making sure that we help get our kids back to where they need to be."

Bash replied, "In retrospect, no second thoughts? Given the numbers that you’re seeing, the decline that we just talked about, do you still feel comfortable with the way that school districts even in your home state handled the pandemic?" Washington's public schools were among the last in the country to reopen.

Murray reiterated the point and said, "I think we were under unprecedented times at that point, where people really were struggling to figure out what was the best thing to do, to make sure that their kids, their families, their children were safe."

During the interview, Murray incorrectly stated that the decision to keep kids home from school was the choice of local schools districts, without acknowledging that many school districts, including those in the state she represents were threatened with denial of funding and other resources if they did not comply with the continued closures.

A new Trafalgar poll has Murray’s Republican opponent Tiffany Smiley within three points, which may be contributing to Murray's continuing decision to refuse to debate Smiley.

Murray also defended President Joe Biden’s claim during his divisive Thursday night speech that "MAGA Republicans" are dangerous, and that "democracy is at risk today" from them.

Bash asked Murray, "If election deniers are a threat to democracy, are you okay with your fellow Democrats helping them win their primaries?"

Murray did not directly answer the question and instead replied with pre-scripted talking points to which Bash responded that she would take Murray’s answer as a "yes."