When asked who is at fault for the demise of journalism, Weiss said "People that work at networks, frankly, like the one I'm speaking on right now." 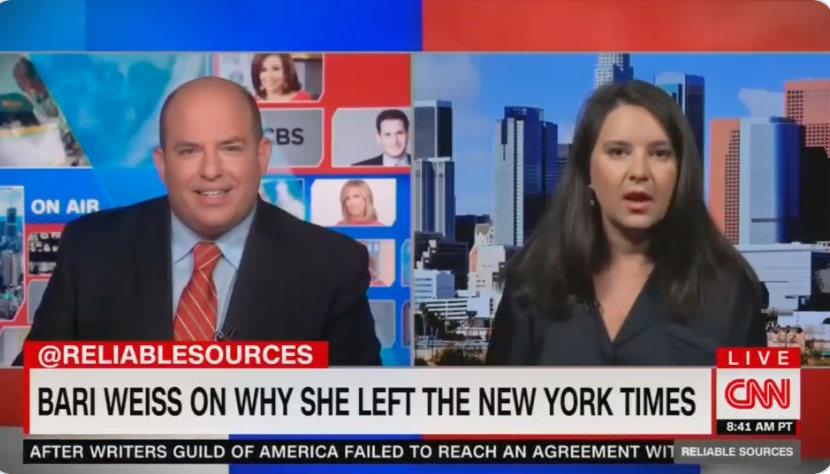 Bari Weiss spoke to CNN's Brian Stelter on Sunday, and gave a striking lesson to the smug news anchor. The "world has gone mad," she said, and it's largely the fault of outlets like Stelter's own CNN.

"You write," Stelter questioned about what Weiss had written on her Common Sense publication on Substack, "'There are tens of millions of Americans who aren't on the hard left or the hard right who feel the world has gone mad.'" Stelter said with some measure of incredulity. "So in what ways has the world gone mad?"

"When you have the chief reporter on the beat of COVID, for The New York Times, talking about how questioning that the virus leaked from a Wuhan lab is racist, the world has gotten mad," Weiss said of New York Times reporter Apoorva Mandavilli, who did report that it is racist to ask if the virus was a lab leak. Mandavilli also falsely reported that 900,000 US children had been hospitalized since the beginning of the COVID-19 pandemic. It was actually 63,000.

"When you're not able to say out loud and in public that there are differences between men and women: the world has gone mad.

"When we're not allowed to acknowledge that rioting is rioting, and it is bad, and that silence is not violence, but violence is violence: the world has gotten mad.

"When we're not able to say that Hunter Biden's laptop is a story worth pursuing: the world has gone mad.

"When in the name of progress. Young school children, as young as kindergarten, are being separated in public schools because of their race, and that is called progress rather than segregation: the world has gone mad.

"There are dozens of examples that I could share with with you and with your viewers," Weiss said, as Stelter tried to interrupt. "Everyone sort of knows this—"

"You say we're not able," Stelter said, "who is the people stopping—who are they?"

"People that work at networks, frankly, like the one I'm speaking on right now," Weiss said with a laugh, "who try and claim that, you know, it was racist to investigate the lab leak theory—"

"Who said that at CNN?" Stelter asked. "But I'm just saying, when you say aloud, I just think it's a provocative thing to say. You say, we're not allowed to talk about these things. But they're all over the internet. I can Google them, I can find them everywhere. I've heard about every story you mentioned. So I'm just suggesting, of course, people are allowed to cover whatever they want to cover."

"But you and I both know, and it would be delusional to claim otherwise that touching your finger to an increasing number of subjects that have been deemed third rail by the mainstream institutions, and increasingly by some of the tech companies will lead to reputational damage. Perhaps you losing your job. Your children sometimes being demonized as well. And so what happens is a kind of internal self-censorship. This is something that I saw over and over again when I was at The New York Times."

This conversation came after Weiss appeared on The Daily Wire's Sunday Special where she spoke with host Ben Shapiro about leaving the New York Times, starting her own Substack and podcast, and the state of journalism.

Weiss left the Times after an op-ed that she ran from Senator Tom Cotton about the need for law enforcement to stop rioting in hundreds of US cities essentially led to the demise of the page entirely and a huge shake up in the editorial department.