"[Biden] said that, you know, by signing this bill, the governor has chosen to target some of Florida's most vulnerable students and families, all while under the guise of parents' rights." 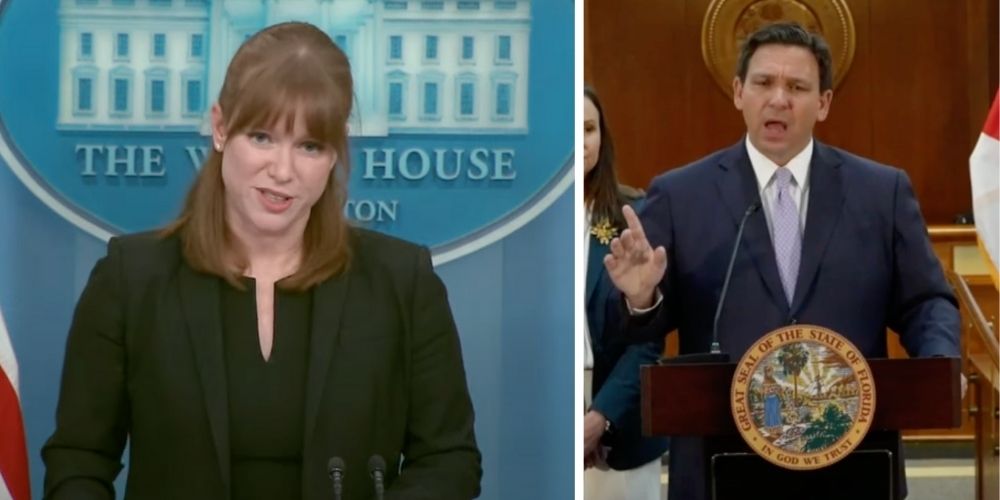 During Tuesday's press conference, the White House affirmed its stance against Florida's "Parental Rights in Education" bill, noting that the Department of Education will monitor the law to see if it violates the federal civil rights law.

"After Florida Governor Ron DeSantis yesterday signed the state's Parental Rights in Education legislation, Education Secretary Miguel Cardona said the administration would be monitoring its implementation to evaluate whether it violates federal civil rights law. Aside from monitoring the Florida law, are there any other actions that the White House plans to take?" one reporter asked.

"Well, both the President and Secretary Cardona spoke out very forcefully against the law," replied Communications Director Kate Bedingfield. "The president also put out a statement yesterday about the tragic impact of this kind of law on an incredibly vulnerable population. And he said that, you know, by signing this bill, the governor has chosen to target some of Florida's most vulnerable students and families, all while under the guise of parents' rights."

"So the Department of Education as you noted, will continue will monitor this law upon implementation to evaluate whether it violates federal civil rights law, and obviously we will come back to you as we have more information on that," she added.

In a tweet following DeSantis signing the bill Monday, Biden wrote in response, "Every student deserves to feel safe and welcome in the classroom. Our LGBTQI+ youth deserve to be affirmed and accepted just as they are. My Administration will continue to fight for dignity and opportunity for every student and family — in Florida and around the country."

Following the bill's signing, Disney declared on Tuesday that it would work to have the bill overturned, to which DeSantis said that the state is not run by "California corporate executives."

"This state is governed by the interests of the people of the state of Florida," DeSantis said. "It is not based on the demands of California corporate executives. They do not run this state. They do not control this state."

"It's interesting," DeSantis said, "when like, Disney-owned ABC would put out that on tweet, they'd say, 'Governor DeSantis signs bill to prohibit instruction and sexual identity and gender identity in some grades.' Some grades. Why would they say some grades instead of K through three?"

Disney, along with others including the White House, have repeatedly and falsely referred to the Parental Rights in Education as the "Don't Say Gay" bill.

The bill states, amongst other issues, that schools will not teach about sexuality or gender identity to students in kindergarten through third grade. Nowhere in the bill does it include the phrase, or parts thereof, "Don't Say Gay."