An Indigenous mother and her four-month-old child were, according to a police report and witnesses, subjected to verbal and physical abuse in a Costco washroom in North-East Edmonton this past Thursday. 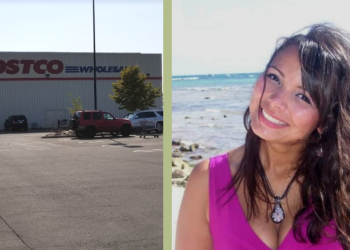 Update: The Edmonton Police Service has confirmed that their Hate Crimes and Violent Extremism Unit has taken over this investigation.

An Indigenous mother and her four-month-old child were, according to a police report and witnesses, subjected to verbal and physical abuse in a Costco washroom in North-East Edmonton this past Thursday.

Lisa-Marie Casavant was waiting in line to use the baby changing table, with her child in her arms, when an older Caucasian woman, upon finishing her hand washing, moved aggressively in Casavant’s direction, ramming her elbow into Casavant’s side and shoving her and her child against the bathroom stall.

Startled and stunned by this seemingly unprovoked attack, Casavant cried “Excuse me!” while the woman walked out the bathroom door screaming with her tongue out and miming Indigenous war cries.

With her child still in her arms, Casavant followed the woman to the customer service desk where she confronted her and asked for an apology.

The woman allegedly angrily responded saying “I don’t owe you nothing you dirty Indian!”

The woman then grew increasingly belligerent and began to yell for security, claiming that Casavant was harassing her.

Aster Tarefe, a witness to both the bathroom incident and the encounter at customer service, found herself also on the receiving end of racist insults, with the woman calling her a n****r several times.

Tarefe, a person of Ethiopian descent, said “It was shocking. I grew up here, I’ve lived here for 35 years, I’d never had to endure such blatant racism in my life. I think it’s leaking into Canada from the U.S. It’s emboldening a few people here and it’s really unfortunate.”

While Costco management was quick to intervene and respond, the woman was not detained and quickly left the store.

Casavant, for her part, filed a report with the Edmonton Police which detailed the events described above. This report was provided to The Post Millennial:

Reflecting on the whole ordeal, Casavant said in an statement to The Post Millennial “I felt targeted and unsafe for the first time in my life. I have received racial slurs before but I’ve never had someone come in my personal space and make me feel concerned for mine and my children’s safety before.”

This  case of alleged racist targeting comes on the heels of a Indigenous families in St. Albert & Leduc receiving a nasty letter urging them to leave their neighborhood because of their “Indian lifestyle.”

While these incidents is disgusting, according to the latest StatsCan data, Indigenous hate crimes are actually down over the past few years, from 35 in 2015 to 31 in 2017.

These facts in mind, it is still so crucial to always report and speak up about these heinous acts and let it be known that it's not acceptable in Canada

Hopefully this can be a lesson for us all that while hate crimes still do happen, and may even be under-reported to police, overall, we still live in a free and tolerant country where 99% of people treat their neighbors as equals, regardless of their race.

Let’s do our best to be kind to all those we meet and continue to pass down the great  Canadian legacy of equality for all, regardless of race or religion, to the next generation.