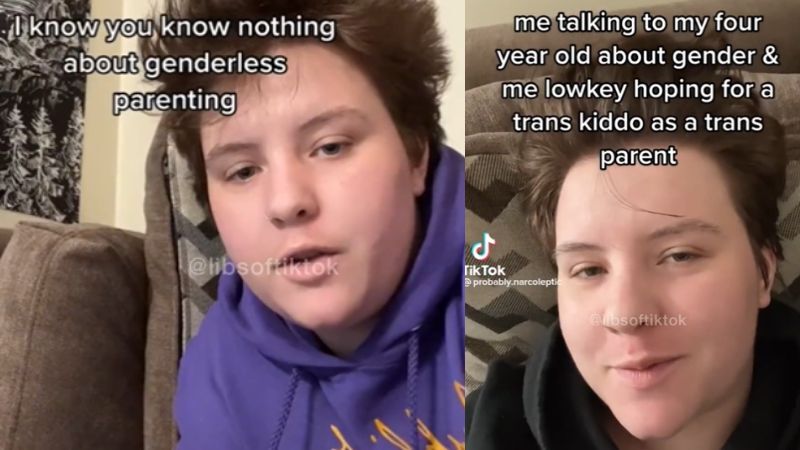 The parent, whose TikTok account is @probably.narcoleptic, said in a video that the whole point of genderless parenting is to let the child “pick” their gender, while also stating that it’s not a choice, but rather who they really are.

“They get to pick. That’s why we use all pronouns instead of just neutral pronouns, so that they can experience all pronouns and how it makes them feel so that when they get to the age of around 3, they can tell me what they prefer,” said the young person.

Then, viewers are told not to worry, as the TikToker assures them that this approach is tried and tested on an older sibling, who is apparently “fine.”

“They’re not going to get bullied because they’ll know before they go to school. Literally, the whole point is they get to pick,” the explanation continues. “It’s not really like a pick because it’s who they are.”

The video ends with the young parent lip-syncing to the lyrics “it would be so awesome, it would be so cool” with a caption reading “me talking to my four-year-old about gender & me lowkey hoping for a trans kiddo as a transparent.”

However, after significant criticism and backlash in the replies to the video, a further series of videos were shared explaining that the part hoping for a trans child was a joke and that the young parent doesn’t wish to have children who will grow up experiencing transphobia.

“My child has expressed to me that they are both a boy and a girl, and this has been going on for months. I ask them quite often because we talk about gender often,” a later video explains. “I’m just here to support them in any way possible, something a lot of trans people didn’t get, and I’m literally trans. I’m on HRT. I know what it’s like to experience transphobia.”