During a White House press briefing on Monday, Press Secretary Karine Jean-Pierre said that the bombshell revelations of Elon Musk's Twitter Files were "old news" and then falsely accused Twitter of increased hate speech since Musk took over. 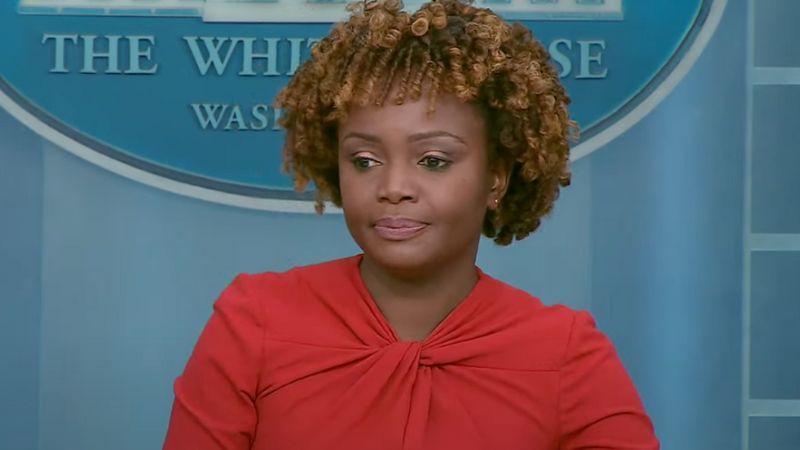 Joshua Young Youngsville North Carolina
Dec 5, 2022 minute read
ADVERTISEMENT
ADVERTISEMENT
During a White House press briefing on Monday, Press Secretary Karine Jean-Pierre said that the bombshell revelations of Elon Musk's Twitter Files were "old news" and then accused Twitter of increased hate speech since Musk took over. By Twitter's own metrics, Musk has shown that hate speech has gone down.

Jean-Pierre said Musk "haphazardly" pushed this "distraction" and the story was "full of old news."

"If you think about it, and at the same time, Twitter is facing very real and very serious questions about the rising volume of anger, hate and anti-Semitism on their platform, and how they're letting it happen," she said.

"And, you know, the President said last week, more leaders need to speak out and reject this. And it's very alarming and very dangerous," Jean-Pierre added. She later said, "it's not healthy, it won't do anything to help a single American improve their lives."

On Friday, Twitter owner Elon Musk started releasing "the Twitter files," documents revealing the extent Twitter censored stories and interfered in American elections, and were reported on by Matt Taibbi.


The Biden White House has been vocally critical for weeks of Musk's acquisition of Twitter. In early November, Biden accused Musk of "spew[ing] lies all across the world" at a fundraising event.

That same week, Jean-Pierre was asked about the federal government's work with social media companies to censor information and said the Biden administration "remains fully committed to our mission to protect the security and resilience of our elections and safeguard election infrastructure."

A portion of the Twitter Files revealed details of Twitter censoring the Hunter Biden laptop story from 2020 which Journalist Emma-Jo Morris broke in the New York Post. Morris wrote of Hunter Biden's "laptop from hell," contents of which implicated Joe Biden and his son in corruption connected with influence peddling and profiteering.

The New York Times published an article on Friday with the headline, "Breaking News: Hate speech on Twitter has jumped since Elon Musk took over, researchers found."

The "researchers" the New York Times cites include the "Center for Countering Digital Hate, the Anti-Defamation League and other groups that study online platforms."

On their website The Center for Countering Digital Hate is described as "a non-profit that counters hate and disinformation, by disrupting the online architecture enabling its rapid worldwide growth." Their about section echos left-wing ideology.

"Digital spaces, however, are often safe for bad actors spreading hate and disinformation, turning them into a hostile environment for others," their website reads. "Over time these bad actors, advocating diverse causes – from misogyny and racism to denial of science and conspiracy theories – have mastered using these platforms to cause considerable real-world harm."

"CCDH have forced social media companies to establish precedent and remove hateful or dangerous content, by holding them directly accountable for amplifying and profiting from it," the page reads.

The New York Times never specified the additional "other groups" they contacted.