In total, there are 21 fatalities, of which only one is confirmed to be directly hurricane-related. 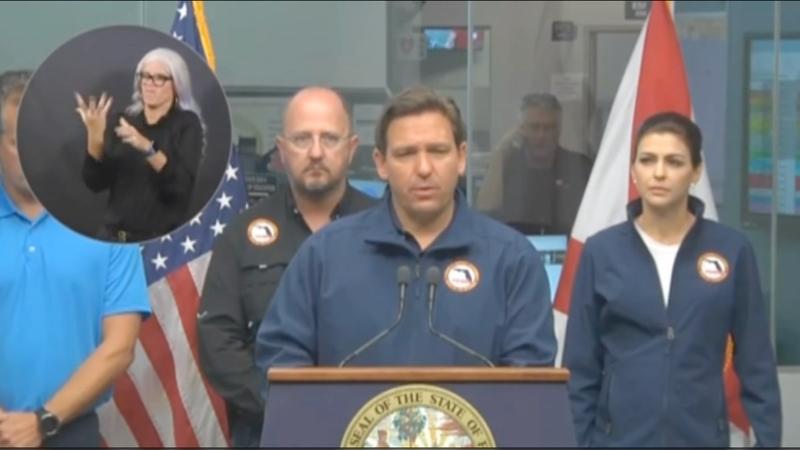 Joined by the state's FEMA administrator and director of the Division of Emergency Management, DeSantis delivered updates on the storm from the State Emergency Operations Center in Tallahassee.

"There's life rescue, making sure people are okay, following up on any type of calls, and there's been really a Herculean effort," DeSantis said, addressing reporters.

"There's also the assessment [of] what's been damaged that's going to impact the entire community. And of course, the power is a big issue. There are people that are working; I think Lee and Charlotte [counties] have about 15 percent restored. There's going to be some more restored likely in the relatively near future. There is going to be some that's going to require some rebuilds."

The governor then thanked his wife, Casey DeSantis, for "spearheading" some of the relief efforts, sharing that over $12 million was raised in disaster funds.

"I want to thank the First Lady for spearheading our efforts for Florida and the Florida disaster fund where people can donate," the governor said.

"If you want to contribute, you will be joining a lot of people who've done a lot of money, and we now have over $12 million with, you know, 24 to 36 hours after the storm hits. Pretty incredible that that's happened."

Hurricane Ian finally moved beyond Florida late on Thursday, opening up the opportunity for more search and rescue teams to venture out to the affected areas and begin counting casualties. Crews patrolling the watery streets saved thousands of Floridians trapped in flooded homes left by the Category 4 hurricane, according to AP.

Lee County Sheriff Carmine Marceno claimed on Good Morning America Thursday morning that while the figures were unconfirmed, fatalities were possibly in the "hundreds," while "thousands" needed to be rescued.
"I definitely know that fatalities are in the hundreds, there are thousands of people waiting that are waiting to be rescued," Marceno said. "But again we can’t get a true assessment until we’re on scene, assessing each scene."

In a Thursday press conference, DeSantis confirmed that these figures were only estimates based on the number of 911 calls in the area.

"None of that is confirmed. I think what that is, is there were 911 calls for people saying, 'hey, the water is rising in my home. I'm gonna go up in the attic, but I'm really worried,'" Gov. DeSantis said.

The conflicting statements caused confusion, prompting Kevin Guthrie, director of the FL Division of Emergency Management, to address the actual number of casualties as he joined the governor for Friday's emergency conference.

Despite the initial reports from Lee County of "hundreds" of fatalities, Guthrie only reported a single confirmed death, though his team is still processing in Lee County.

"...People die in disasters that have nothing to do with the disaster, right? So, the medical examiner is the one that makes that determination. They are the lead agent at the local level to determine when they investigate that this is either disaster-related or not disaster-related. If it is determined to be disaster-related — you've heard the governor and I talked about this now for about three or four days — it is a direct death… storm surge, rising water, things of that nature. Or indirect; the stuff that led up to it or after the fact," he continued.

In total, there are 21 fatalities, of which only one is confirmed to be directly hurricane-related.

According to President Joe Biden, Ian "could be the deadliest hurricane in Florida history," responsible for a "substantial loss of life," reported Sun Sentinel.

Guthrie also provided vital safety tips on how to avoid carbon monoxide poisoning and electrocution while using a generator to power one's home.

"​​Please operate your generators in a safe mode. That also includes not having electrical cords actually run through puddles of water," he added.

According to Criswell, FEMA has "begun to move food and water into those points of distribution to support what you just heard from Director Guthrie and the governor."