The progressive congressman said that his top priority is to take back the House from "the dangerous and dysfunctional nature of the Extreme MAGA Republicans." 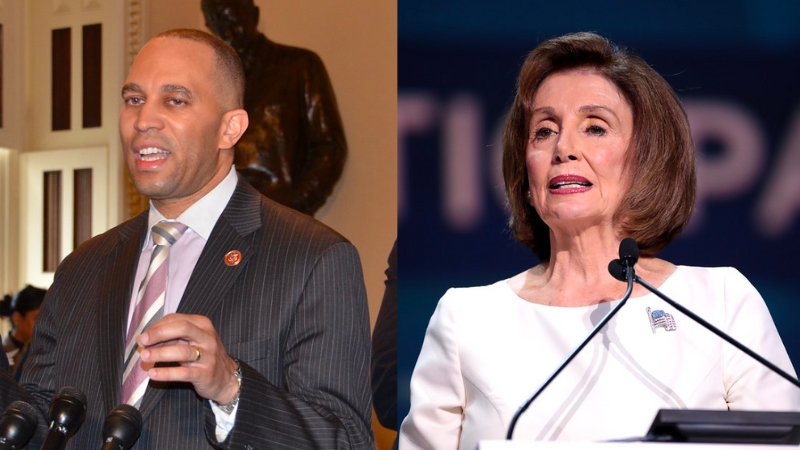 Olivia Rondeau
Nov 18, 2022 minute read
ADVERTISEMENT
ADVERTISEMENT
Noted election denier Rep. Hakeem Jeffries announced Friday that he is seeking to replace Speaker Nancy Pelosi as the leader of the congressional Democrats, with his top priority being taking the House back from "Extreme MAGA Republicans."

Jeffries, who has represented New York's 8th congressional district since 2013, wrote a letter to his fellow House Democrats asking to replace the 83-year-old just a day after she announced she would not be looking for re-election to the leadership position.

"When I initially sought the position of Chair of the House Democratic Caucus two terms ago, none of us could have predicted the challenges the American people would confront in the years to come," he wrote. "However, time and again, throughout a period of enormous turmoil for our nation, House Democrats rose to the occasion."

The 52-year-old has been in party leadership for almost six years, first joining the Democrats' policy committee, and later serving as chair of the House Democratic Caucus since 2019, according to Fox News.

"Today, I write to humbly ask for your support for the position of House Democratic Leader as we once again prepare to meet the moment," Jeffries wrote, adding that his goals are to "partner with the Biden administration" to "vigorously address" the issues.

The progressive congressman, who handily beat his Republican opponent Yuri Dashevsky in the midterms, went on to say that his top priority is to take back the House from "the dangerous and dysfunctional nature of the Extreme MAGA Republicans."

He continued on to go after the GOP.

"If the Republican Conference continues to major in demagoguery and minor in disinformation, their bankruptcy of ideas must be aggressively exposed on an ongoing basis," Jeffries stated.

With Jeffries' biggest potential challenger to congressional leadership, Washington Rep. Pramila Jayapal, announcing that she will seek another term as chairwoman of the Congressional Progressive Caucus instead, the goal seems to be wide-open for him.

Jeffries is also supported by the Congressional Black Caucus, which boasts 50 members.