"Mainstream media will still thrive, but increased competition from citizens will cause them to be more accurate, as their oligopoly on information is disrupted." 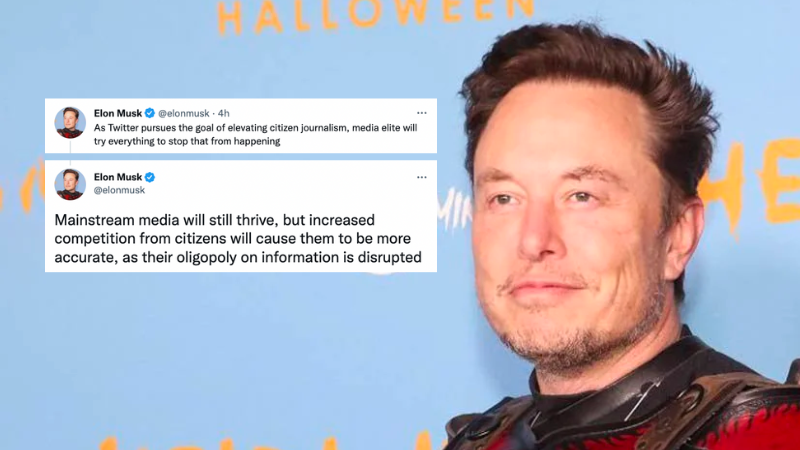 Libby Emmons Brooklyn NY
Nov 11, 2022 minute read
ADVERTISEMENT
ADVERTISEMENT
Elon Musk brought some optimism to the doomscrollers of Twitter on Friday, expressing his intention to have Twitter pursue "the goal of elevating citizen journalism," though "media elite will try everything to stop that from happening."

He followed up with, "Mainstream media will still thrive, but increased competition from citizens will cause them to be more accurate, as their oligopoly on information is disrupted."

Twitter has been a place where journalists reporting with a left-wing bias have felt a certain measure of safety. When they have expressed perspective as fact, or made assumptions based on misconceptions, the platform has upheld those views, backed them, and boosted them. This was evident with narratives surrounding elections, the Covid pandemic, concepts of Russian collusion, immigration, gender ideology, and so many other areas.

For conservative-leaning journalists, the platform, while still an essential tool for the distribution of articles, has been fraught with landmines and pitfalls. The wrong word was enough to be reported for hate speech and suspended. Saying outright that a man who impersonates a woman is still a man, for example, or that vaccines have, in certain cases, caused more harm than good, or even that facemasks are not a foolproof method of avoiding and preventing the contraction of airborne illnesses, has been enough for Twitter mods to jump in, restrict, censor and suppress.

In so many cases, that which was suppressed by Twitter as well as other social media platforms, under the guise of being misinformation or disinformation, later proved to be true. While Jack Dorsey and Mark Zuckerberg walked back the notoriously bad censorship on both of their platforms of reporting from the New York Post on influence peddling by Hunter Biden on behalf of Joe Biden and the entire family, on other topics, neither platform has made amends.

On the origins of Covid, the efficacy of vaccines or lockdowns, gender ideology, child sex changes, and so many other areas, the platform has simply made the assumption that the left-leaning pundits are right, the conservative pundits are wrong, and acted accordingly.

Additionally, they've done this not only with the approval of the Biden regime, but with their encouragement and help. The Department of Homeland Security as well as government officials working on Covid, conspired with tech companies to tell them what to suppress and censor, to instruct them as to what constituted misinformation and disinformation. Though repeatedly, that which contradicted their narrative on Covid, climate change, Ukraine, and the Biden family was classed as misinformation.
"The media elite wants a monopoly on the truth, and citizen journalism threatens their narrative," Rebel News' Ian Miles Cheong said. "Can't have that, so they bully corporations and social media companies into doing their censoring for them by calling it all 'disinformation.'"

Musk has recently made big changes to the media-heavy social media platform, including some adjustments that have caused legacy and corporate media personnel to freak out. Among those changes are one crucial update: a subscription service for Twitter validation.

The coveted blue check mark that appears next to many journalists' names on Twitter has been a badge of honor, an indication that said journalist is officially trusted, able to be sourced, a valid voice in the media sphere.

But now, Musk has launched a program where any user can pay $8 to access verified status. He rolled this out with the idea of combatting bots on the platform, or accounts that are generated without a real person behind them. Media pundits flipped out, saying that now their validation, their blue check, doesn't mean anything.

It was suspended for now, due to impersonations. But what it revealed was eye-opening. The same journalists that complain about the need for equity, for equal access, for everyone to have the same opportunities, and for the abolition of the meritocracy on the basis that achievement is somehow biased, are now the ones who are angry that the blue check mark they feel they've earned on their own merits will now be available to everyone.

Those in media will no longer have a free pass to spin propaganda as though it is fact.

Legacy and corporate media have their place. They have resources and expertise, and they should use that to do the kind of on-the-ground reporting that citizen journalists can only do one at a time. They should use their assets and their infrastructure not to spin webs of bias and to pump administration narratives, but to find truth and report accurately.

What Musk offers is an opportunity to come out from behind the wall of propaganda and finger-pointing, and it would behoove those in media to take it.
ADVERTISEMENT
ADVERTISEMENT
musk media