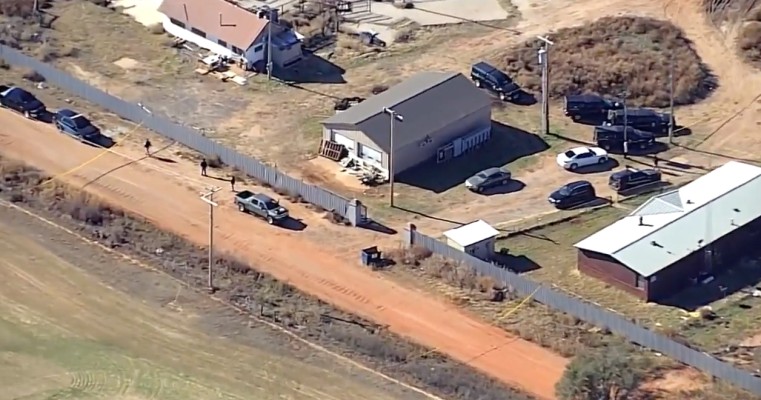 Alex Timothy
Nov 22, 2022 minute read
ADVERTISEMENT
ADVERTISEMENT
Police have identified a suspect in the quadruple homicide at a marijuana farm in Oklahoma this weekend, but won't release their identity as doing so could potentially put others in danger.

The Kingfisher County Sheriff's office received a call on Sunday night about a possible hostage situation at the farm, but deputies arrived there to find four people dead and one injured, according to the Associated Press.

Authorities said on Tuesday that three men and one woman were "executed" on the ten-acre property west of Hennessey, while a fifth victim was found wounded and taken to a local hospital.

A suspect has been identified, but the name is being withheld for the time to avoid endangering others.

"The suspect was inside that building for a significant amount of time before the executions began," the Oklahoma State Bureau of Investigation (OSBI) said in a Tuesday news release. "Based on the investigation thus far, this does not appear to be a random incident."

It is believed that the suspect knew the victims, though it is unclear exactly how.

"They all know each other," OSBI Capt. Stan Florence said on Monday. "We don’t know if they’re related, or if they’re coworkers, but certainly these individuals were, we believe, all familiar with each other."

The victims have not yet been identified, and a "significant language barrier" is making next-of-kin notification difficult, police said.

The case is also being investigated by the Oklahoma Bureau of Narcotics and Dangerous Drugs Control, as it is possible that drug trafficking or black market dealing could have contributed to the incident, though Mark Woodward, a spokesman for the agency, said it was too soon to say.

"It being a marijuana farm, obviously Oklahoma state law requires that they have a license from the Oklahoma Medical Marijuana Authority and from us," Woodward said. "One of the things we’re looking at is, is it obtained legally or was it obtained by fraud? So that’ll be part of our investigation.