On the third day of the riot in 1991, Al Sharpton and Sonny Carson led a march of protesters chanting, "No Justice, No Peace!" "Death to the Jews!" 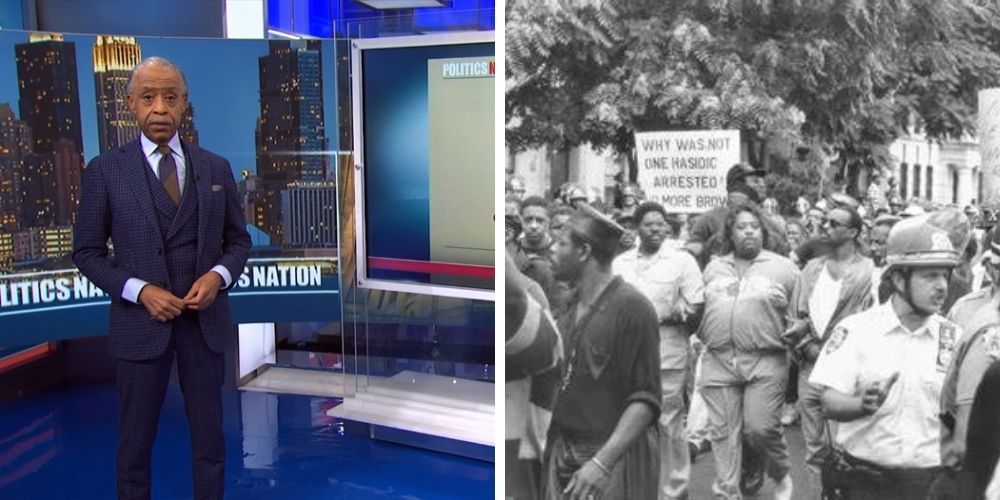 On Sunday, Reverend Al Sharpton, host of Politics Nation on MSNBC, in his Memo to Trump segment, ripped the President for the riot at the US Capitol.

"This week you directed your followers to the United States Capitol…commanded your mob to the Capitol and admonished them against weakness."

The reverend appears to have a gap in his memory for his role in instigating the deadly 1991 Crown Heights race riots in New York.

Leading up to the riots, Sharpton gave many fiery speeches condemning the "blood-sucking" Jews. He supported others who gave anti Semitic speeches. Following one of those speeches and the subsequent controversy, he famously said the day before the riots began, "If the Jews want to get it on, tell them to pin their yarmulkes back and come over to my house."

On August 19, 1991, a car ran a red light while following the motorcade of Rabbi Menachem Mendel Schneerson, the leader of Chabad-Lubavitch which is headquartered in Crown Heights. Two black children were accidentally hit. One of the children died and the other was severely injured.

After the accident, the driver said that he tried try to lift the car in order to free the two children beneath it. However, a few men had gathered and began assaulting the driver, beating him to a pulp according to the responding EMS unit statements. An ambulance from the Hatzalah volunteer Jewish Medical service also arrived on the scene.

A false rumor began to spread that the Jewish ambulance crew had ignored the dying black child in favor of treating the Jewish man. This false rumor was used by Al Sharpton to incite the crowd to violence.

Encouraged by the rumors and rhetoric, groups of young black men threw rocks, bottles, and debris at police, residents, and homes. According to the New York Times, "more than 250 neighborhood residents went on a rampage the night of the accident, mostly black teenagers, many of whom were shouting 'Jews! Jews! Jews!'"

Three hours after the tragic accident, 29-year-old Australian Jewish student Yankel Rosenbaum was attacked by a mob of 30 Black teens. He was stabbed four times and died later that evening.

The next evening, according to sworn testimony of Efraim Lipkind, a former resident of Crown Heights, "...a famous man, Al Sharpton, who came down, and he said Tuesday night, kill the Jews, two times. I heard him, and he started to lead a charge across the street to Utica."

According to the Jewish Press, for three days following the accident, African Americans and Caribbeans in the neighborhood, joined by increasing numbers of non-residents, rioted in Crown Heights. Jews were easy targets not only because of their dress but because of Mezuzahs, ritual markers, affixed to every Jewish home’s front door.

On the third day of the riot, Al Sharpton and Sonny Carson led a march of protesters chanting, "No Justice, No Peace!" "Death to the Jews!" and "Whose streets? Our streets!" The mob displayed anti-Semitic signs and burned an Israeli flag.

Order was finally re-established by the NYPD on Aug. 21 but sporadic violence against Jews continued for weeks.

On Sept. 5, after the riot was over, an Italian-American, was dragged out of his car, beaten and stabbed to death because his beard and dark clothing caused him to be mistaken for a Hasidic Jew.

A week after the riots, at the funeral of the child who died in the accident, Sharpton gave a eulogy which re-ignited tensions in the area. One of the banners at the funeral read, "Hitler Did Not Do the Job."

"The world will tell us he was killed by accident. Yes, it was a social accident...it’s an accident to allow an apartheid ambulance service in the middle of Crown Heights…talk about how Oppenheimer in South Africa sends diamonds straight to Tel Aviv and deals with the diamond merchants right here in Crown Heights. The issue is not anti-Semitism; the issue is apartheid...all we want to say is what Jesus said: If you offend one of these little ones, you got to pay for it. No compromise, no meetings, no kaffe klatsch, no skinnin’ and grinnin.’ Pay for your deeds."

During the riots, Sharpton even bullied New York City mayor David Dinkins into keeping the police from responding with all of their resources.

Dinkins would later say, "I regret not saying to the police brass sooner, 'Whatever you guys are doing is not working.' I will forever be accused of holding back the police and permitting blacks to attack Jews." According to National Review, Dinkins thought he was judged unfairly in the matter and complained that the first line in his obituary would describe him as the mayor who "screwed up Crown Heights."

But Sharpton wasn’t done yet. In 1995 a black Pentecostal Church, the United House of Prayer, which owned a retail property on 125th Street, asked Fred Harari, a Jewish tenant, who operated Freddie's Fashion Mart, to evict his longtime subtenant, a black-owned record store called The Record Shack.

Sharpton led a protest against the planned eviction of the store and told the crowd, "We will not stand by and allow them to move this brother so that some white interloper can expand his business." One of the protesters, entered Freddie’s with a gun and flammable liquid, shot several customers and set the store on fire. The gunman fatally shot himself, and seven store employees died of smoke inhalation.

In 2002, Sharpton expressed regret for making the racial remark "white interloper" but denied responsibility for inflaming or provoking the violence.

Three days after the deadly riot at the Capitol, CNN contributor Keith Boykin tweeted out, "Imagine this scenario. Rev. Al Sharpton holds a rally and tells his supporters to 'take back' their country with 'strength' and 'combat.' Then, five people die after Black Lives Matter activists storm the U.S. Capitol. How would Fox News and congressional Republicans respond?"

The reaction came fast and furious, calling him out for being ignorant of Sharpton’s past remarks and actions.

In complete denial about his own past, Sharpton closed out his Sunday night monologue by saying:

"A couple of thousand of them, took you at your word and took their tantrum to the Capitol, destroying federal public property, threatening government officials, and tearing at the very fabric of American democracy, leading to the deaths of five people, that we know of. All while you set safely in the people’s house, watching your mercenaries on television and telling them 'how very special they were' and that you loved them."

Sharpton concluded, "Those rioters were reflecting your own poisonous narcissism right back at you of course you loved it, the destruction and lawless ness at the capitol represent the very essence of your failed leadership and it is you who must be held accountable."