One man was stabbed by an Antifa militant, prompting dozens of protesters to retaliate. 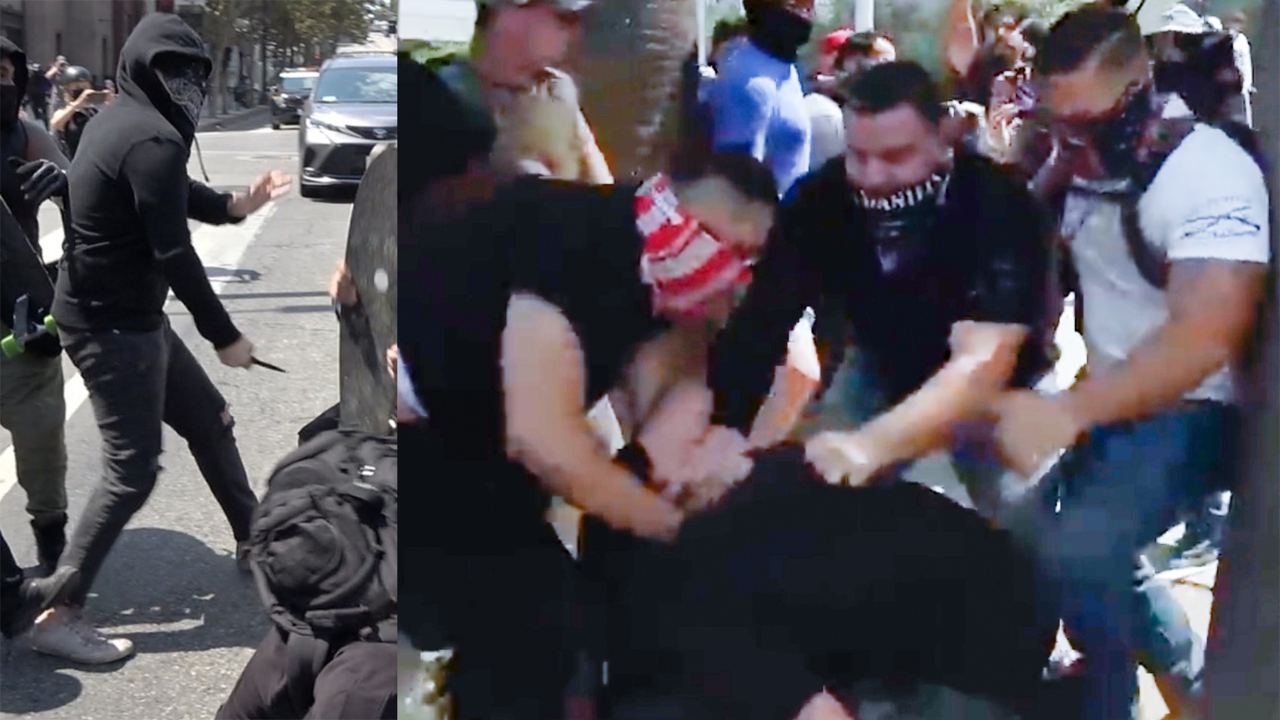 In what first began as a clash of words between anti-mask mandate protesters and Antifa in front of the Los Angeles Police Department headquarters escalated into blows as left-wing militants struck out at the protesters. One man was stabbed by an Antifa militant, prompting dozens of protesters to retaliate.

Organizers of the “Choose Freedom March” rallied on Saturday to protest against the city’s “medical tyranny, mandatory vaccinations and vaccine passports,” where they were soon met by an opposing group of Antifa, who were dressed in "black bloc" gear, who called for “no safe spaces for fascists.”

At least 500 Los Angeles residents gathered in front of the south lawn of the Los Angeles City Hall to peacefully protest the city’s issuance of mask mandates and mandatory vaccinations, where they were met by black-clad counter-protesters at around 2pm, LAPD spokesman Lt. Raul Jovel said.

The police have yet to make an arrest but say officers were processing many reports from witnesses and those involved in the melee, as seen in footage taken by video journalist Tomas Morales.

Quoting the LAPD, Daily News reported that a fight broke out among 20 to 30 protesters and counter-protesters in front of the LAPD headquarters, across the street from City Hall, when the stabbing occurred. Police identified the victim as a man in his 20s, whom police say was stabbed at least once in the chest.

Speaking at the press conference, LAPD Officer Mike Lopez said that the victim was taken to a nearby hospital, where he remains in serious condition.

Footage of the stabbing was shared on social media by video journalist Ford Fischer.

“This is the stabbing in slow motion,” he wrote. “If you watch closely, you’ll actually see that while the person stabbed continues to fight, even deploying mace against antifa activists, blood starts to drip into his purple shirt.”

“Purple shirt guy toward the beginning of the clip can be seen with the shirt clean,” he noted. “After the jab, while he deploys mace, bleeding is visible on the right side of his body. He then appears to go the opposite direction ahead of the second wave of brawling.”

Still photographs of the stabbing victim were shared by the Associated Press on Daily News.

LAist contributor Frank Stoltze who was allegedly present at the scene claims he was “shoved, kicked and my eyeglasses were ripped off my face by a group of guys at a protest – outside City Hall during an anti-vax Recall @GavinNewsom Pro Trump rally.”

“These aren’t ‘patriots’. Not wearing a mask and being anti-vax isn’t patriotism - it’s stupidity,” she said, as reported by the LA Times. “We have to be able to have differences of opinions without resorting to violence.”

The LA Times describes the black bloc Antifa militants as merely "counterdemonstrators," making little mention of the threats they hurled at protesters or their constant use of the term "fascist" in reference to the anti-mask mandate protesters.

“We are on scene to maintain order after a fight broke out between Antifa and people gathered for the permitted event. We are aware of one male that was stabbed and is being treated by Fire Department personnel,” said LAPD spokesman Capt. Stacy Spell. “No arrests have been made but [the] investigation is ongoing.”

The LA Times pushed back on the LAPD's description of the counterprotesters as Antifa, describing them as "a mixture of people who have shown up to oppose anti-vaccine and anti-mask rallies in recent months."

As detailed by the Daily News, the Los Angeles City Council voted earlier this week to draw up legislation requiring proof of vaccination to enter many public indoor spaces in the city, including restaurants, bars, movie and concert venues, and even retail stores.

On Wednesday, Gov. Gavin Newsom announced a statewide requirement for all California teachers and school employees to show proof of COVID-19 vaccination or submit to weekly testing. The requirement has also been put in place by Los Angeles County, which now requires its employees to get vaccinated, and many private companies are following suit.

On Friday, the Los Angeles Unified School District implemented a vaccine mandate, requiring all teachers to be fully vaccinated against COVID-19 by October 15. The district had previously only required weekly testing for students and staffers regardless of vaccination status. Despite the implementation of the vaccine mandate, the testing requirement will remain in place.