"Team AOC" sent out an email asking supporters to report social media posts which include the revelation that she was not in the US Capitol Building during the Jan. 6 riot, which she wasn't. 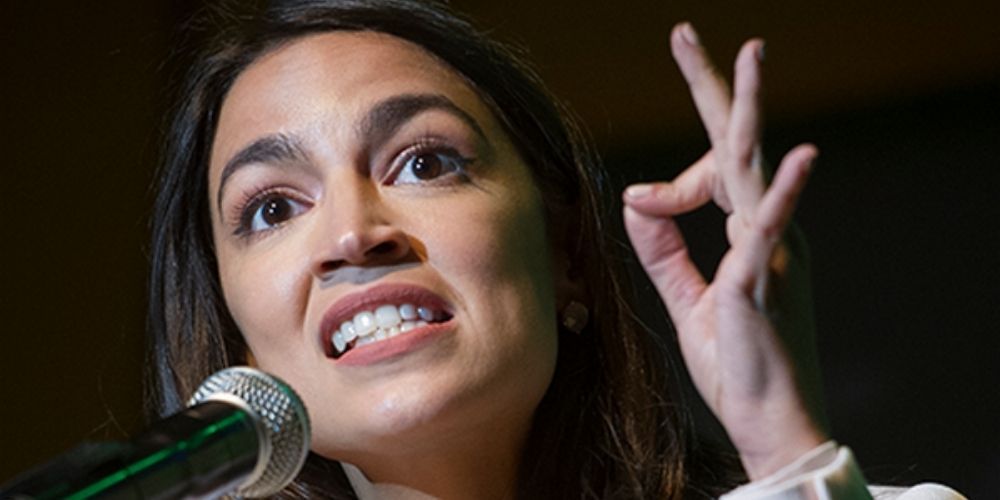 "Team AOC" sent out an email Wednesday night asking supporters to report social media posts which include the revelation that Rep. Alexandra Ocasio-Cortez (D-NY) was not in the US Capitol Building during the January 6 riot, which she wasn't. The email called the posts "misleading information" though the information was based on fact.

The email was sent in response to the hashtag #AlexandriaOcasioSmollett trending on Twitter after it was revealed that Ocasio-Cortez was not in the Capitol Building at the time of the pro-Trump riot on Jan. 6. She had posted an emotional Instagram video Tuesday suggesting that she was, but also said in that video that she was in her office. Her office is in the Cannon House Office Building.

In the email, the congresswoman's team calls on supporters to "scan your social media to find posts with this 'misleading information,' especially those using the misleading hashtag," and to report it.

#AlexandriaOcasioSmollett was trending on Twitter on Wednesday, which is a reference to the infamous hate crime hoax perpetuated by actor Jussie Smollett in 2019, wherein he falsely claimed that he was beaten by a group of Trump supporters in Chicago shouting racial slurs and telling him "this is MAGA country." It was later discovered that Smollett had paid two men to beat him up and place a noose around his neck. Smollett continues to insist that the assault happened as he originally alleged.

Ocasio-Cortez had seemingly claimed that rioters had made it to her office door yelling "where is she?" She further claimed that she thought she was going to die during the riot and that Republican Senators such as Ted Cruz were complicit in the alleged attempt on her life. The man who came to her office seeking her whereabouts was actually a Capitol Police Officer looking to direct her to safety.

According to her website, Ocasio-Cortez's Washington, DC address is 229 Cannon HOB. The Cannon HOB is accessible to the Capitol via tunnel. On Tuesday, Ocasio-Cortez spoke to millions of fans on Instagram relaying her past experience of sexual assault, which she said left her traumatized. This experience, she said, was compounded by her what happened to her during the Capitol Hill riot, during which she hid in her office's bathroom. Rep. Nancy Mace, who occupies offices two doors down, said there were no rioters in their hallway.

Hours later a new hashtag #AOClied was trending on Twitter.

Ocasio-Cortez has spoken at length about her experience during the Capitol Hill riot on Jan. 6. From her live Instagram videos, it has seemed like she was on the front line, facing down Trump supporting rioters in the halls outside her office. But it turns out, Ocasio-Cortez wasn't in the Capitol at the time of the assault on Congress, she was in her office another building entirely.

The email asks supporters not to use the hashtag themselves because it will only "spread them further."

The email then asks supporters to report the "threatening or harassing" posts and flag them for moderators, knowing that Facebook and Twitter "have built in tools for reporting posts and tweets that break the rules." The email appears to be another example of Democrats and progressives asking "Big Tech" to silence conservatives and Republicans on social media.

It was unclear what rules had been broken by Twitter users who relayed the information that she was not in her office during the assault on the Capitol, as the claim was proven to be true, and she was not near the riot. It was also unclear what was "threatening or harassing" about the posts. The email then claimed that these kind of posts are what triggered the Jan. 6 riot in the first place and says "people have been mislead and radicalized."

It was only a few months ago, in the lead-up to the November presidential election, that Ocasio-Cortez bragged that the progressive movement has "radicalized" millennials. "We're winning," she said at the time, "we're doing this thing... we've won the generational argument, and that millennials are radicalized and Gen Z is out here with class consciousness and I truly believe that we're winning this and I couldn't be more excited."

According to her email, hundreds of thousands or even millions of people have seen the posts. Many were quick to point out on social media that rather than working on helping people with COVID relief or any other number of government tasks, Ocasio Cortez was using her resources to try to cancel truthful posts about her own deception.