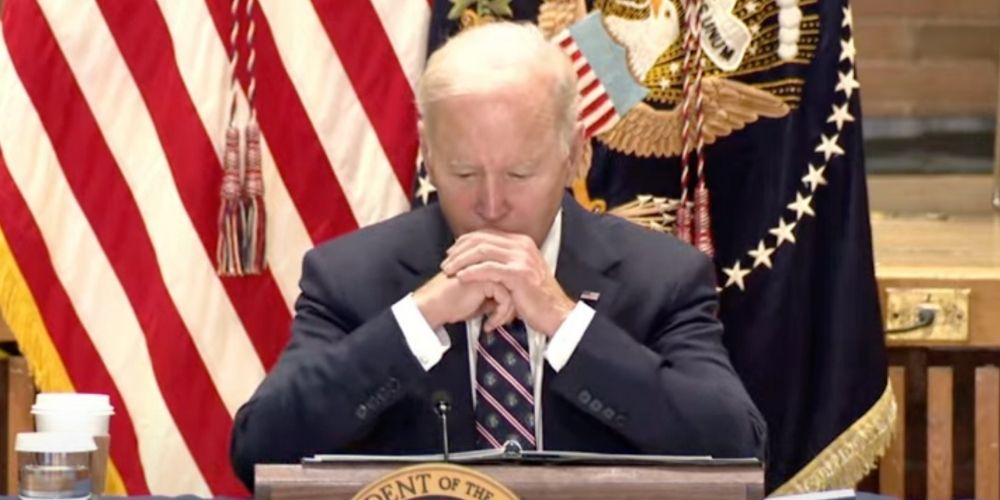 Biden opened the the meeting by talking about the recent deaths of New York City Police officers Wilbert Mora and Jason Rivera, who were killed late last month in a shooting.

"Let me start by saying detective Wilbert Mora and Jason Rivera are the who and what law enforcement ought to be," Biden began. "I’ve spoken to their families and their loss for the city is also a loss for the nation."

"You know, futures cut short by a man with a stolen Glock with 40 rounds. A magazine with 40 rounds. And it's really a weapon of war," he said.  "One of the things I was proudest of years ago when I was in the Senate, I was able to get these weapons and the size of magazines outlawed, that got changed, got overruled, but I don't see any rationale why there should be such a weapon able to be purchased. It doesn't violate anybody's Second Amendment rights to deny that."

Biden continued on to state that every day in the country, 316 people are shot and 106 are killed. So far this year, six NYPD officers have become victims to gun violence in the city.

In his speech, Biden expressed a number of points already set forth in his spring initial actions to address what they called "the gun violence public health epidemic.

"Congress needs to do its job to pass the budget, every one of these folks here from Congress are all supportive, but you know it's time to fund communities, community Police and the people who are gonna to protect them," said Biden.

"Look, as I said, we're not about defunding. We're about funding and providing the additional services you need beyond someone with a gun strapped to their shoulder," he continued.

Biden stressed the need for social workers and mental health workers to respond to calls where they would be needed. He also stated that he is proposing to increase funding for the Bureau of Alcohol, Tobacco, and Firearms, and the US Marshal’s service, with a promise to double down on this investment next year.

"I have the US Attorney, United States Attorney General here with me today. We put together a comprehensive strategy to combat gun crime in cities like New York, Philadelphia, Atlanta, and many other cities, San Francisco," said Biden. "First, we want to crack down on the flow of firearms used to commit violence. That includes taking on and shutting down, rogue gun dealers."

Biden continued on to stress the importance of universal background checks on those purchasing guns, and "making sure that people who are not allowed to have a gun, don't get the gun in the first place."

He also stressed the importance of going after ghost guns, or guns that are bought in pieces and can be assembled at home.

"Ghost guns are the guns everyone in this room knows that can be purchased in parts, assembled at home, no serial number, they can't be traced. And there's deadly as with any other weapon out there. But the fact is there, they are out there," Biden said.

"And you know this spring, the Justice Department this spring, the Justice Department will issue a final rule to regulate these so-called ghost guns. but there's more we can do. Across the country police departments report sharp increases in the number of ghost guns found at crime scenes. That's why today the department is launching an intensified national ghost gun enforcement initiative to determine and deter criminals from using those weapons to cover their tracks," he continued.

"If you commit a crime in the ghost gun, not only are your state and local prosecutors going to come after you, but expect federal charges and federal prosecution as well," he added.

Biden continued on to state that they have created a strike force to crack down on guns being trafficked across state lines.

"Today the Attorney General directed all US attorneys in the United States to prioritize combating gun trafficking across state lines and city boundaries," said Biden. "The Justice Department is sending additional products to our resources to help shut down what's referred to as you all know, the iron pipeline, that funnels guns from shops in states like Georgia the crime scenes in Baltimore, and Philadelphia, New York and so many other places."

"Governor, you worked with the Mayor and the NYPD and nine other states to create an interstate task force on illegal guns. That's the kind of leadership that's going to solve the problem," he added.

"That's why today the Attorney General is also directing us attorneys to work with state and local law enforcement strength, strengthen partnerships like this one, and to get repeat gun violence offenders off the street and behind bars," Biden said.

Biden continued on to urge cities to use some of the $350 billion set aside in the American Rescue Plan to fight crime within cities by hiring more officers, paying overtime, "and purchasing gun fighting technology like the technologies that hears locates gunshots So there can be immediate response, because you know exactly where it came from."

Biden stated that the third thing his plan calls for is the investment in services that reduce crime and violence in communities. These programs include after school programs for teens, school counselors, mental health services, substance abuse treatment, and counseling and training for inmates leaving prison to prevent them from returning in the future.

"And folks, these laws, if we’re able to pass, we're gonna save lives, and more equally importantly, help you protect one another and protect yourself, put law enforcement in a more safer circumstance. We have an opportunity to come to get together and fulfill the first responsibility of government and our democracy, to keep each other safe," Biden said.