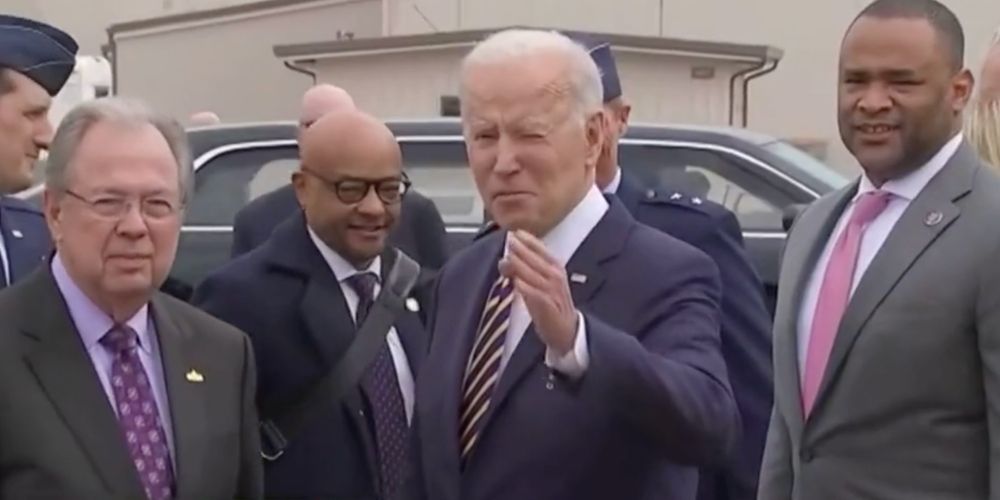 Upon his arrival to Fort Worth, Texas on Tuesday, President Joe Biden was hit with questions from the press on whether he had a message for Americans seeing skyrocketing gas prices at the pump.

White House press correspondents reported that when asked if he had a message for the American people regarding these prices, Biden said: "They're gonna go up."

When pressed further on what he and his administration can do about it, Biden said: "Can’t do much right now. Russia’s responsible."

The comments reflect a similar sentiment expressed during an address Biden gave on Tuesday morning where he called the jump in gas prices "Putin's price hike."

"The decision today is not without cost here at home. Putin's war is already hurting American families at the gas pump. Since Putin began his military buildup on Ukrainian borders, just since then, the price of the gas at the pump in America and 75 cents. And with this action, it's going to go up further. I'm going to do everything I can to minimize Putin's price hike here at home," Biden stressed.

Biden also slammed those that say his administration and policies are "holding back domestic energy production."

"That's simply not true," said Biden. "Even amid the pandemic companies in the United States pumped more oil during my first year in office than they did during my predecessor’s first year. We're approaching record levels of oil and gas production United States, and we're on track to set a record for oil production next year."

"In the United States, 90 percent of onshore oil production takes place on land that isn't owned by the federal government. And of the remaining 10 percent that occurs on federal land, the oil and gas industry has millions of acres leased. They have 9000 permits to drill now, they could be drilling right now, yesterday, last week, last year. They have 900 to drill onshore that are already approved," said Biden.

Gas prices have jumped in recent weeks, months, and year, with the national average reaching an all time high early this week of $4.173 per gallon, according to data from the American Automobile Association.

In response to Biden’s statements in Fort Worth, the House Judiciary GOP wrote on Twitter, "so basically Joe Biden is just giving up. Got it."