"To begin with, let me point out the obvious evil swept across the valley yesterday. Anyone who shoots his grandmother in the face has to have evil in his heart," Abbott said. 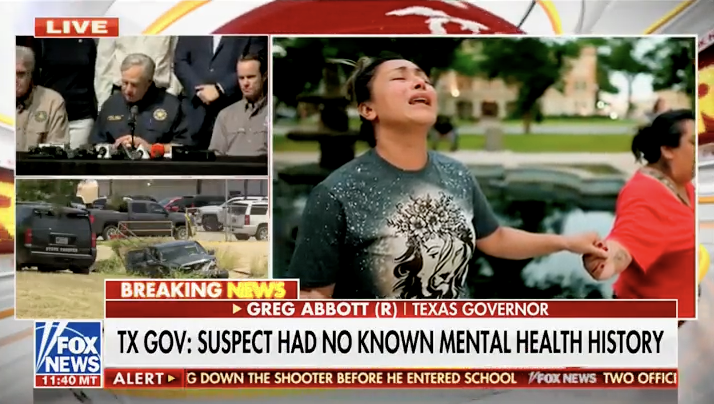 Texas Governor Greg Abbott spoke on Wednesday in the aftermath of the horrifying school shooting at the Robb Elementary School in Uvalde, Tex. While expressing his grief and choking back tears, he spoke about the heroism of law enforcement officials who ran toward the scene of the crime in an attempt to save lives, only lamenting that they weren't able to save more.

"To begin with, let me point out the obvious evil swept across the valley yesterday. Anyone who shoots his grandmother in the face has to have evil in his heart," Abbott said.

"But it is far more evil for someone to gun down little kids. It is intolerable. And it is unacceptable for us to have in this state anybody who would kill little kids in our schools. Children are a blessing. God teaches us that. We're filled with laughter, innocence and joy. Their love is a gift that parents get to unwrapped every single day," Abbott said.

The shooter, who acted alone and was killed by an unnamed border patrol agent at the scene, took the lives of 19 children and 2 teachers. He used firearms that he had purchased shortly after his 18th birthday. 17 were injured but their injuries are not life threatening, Abbott said, noting that family members had been notified and that parents of the deceased will be given the opportunity to see their children.

"All parents are welcome and urged to contact victim services at the County Fairplex," he said.

Abbott gave the information that he said was available at the time, saying "the first thing that happened was that the gunman shot his grandmother in the face." She called police, he fled, crashed his truck near the school, and then ran into the school.

The gunman had no known criminal history or mental health history, and used an AR-15. "There was no meaningful forewarning of this crime other than what I'm about to tell you," Abbott said.

"The only information that was known in advance was posted by the gunman on Facebook approximately 30 minutes before reaching the school. The first post was to the point of 'I'm going to shoot my grandmother.' The second post was 'I shot my grandmother.' The third post, maybe less than 15 minutes before arriving, and his goal was 'I'm going to shoot and elementary school.'"

"During the shoot out that took place in the school," Abbott said, "in addition to the students and faculty, there were three officers who were injured who were all remain in good condition. One Deputy Sheriff lost a daughter in that school."

In discussing the reasons for this shooting with law enforcement in the community, he said that they revealed to him that there is a mental health crisis in the community.

"I asked the sheriff and others and open-ended question and got the same answer from the sheriff as well as from the mayor of... what was the problem here?" Abbott relayed.

"And they were straightforward and emphatic," he said, "they said 'we have a problem with mental health illness in this community." Abbott elucidated the resources available for mental health for both adults and children in the state.

"I cannot emphasize the importance of law enforcement officers, all of them" Abbott said, "seeking out these mental health services."

Mental health concerns played a large role in the comments of all of those who spoke at the press conference.