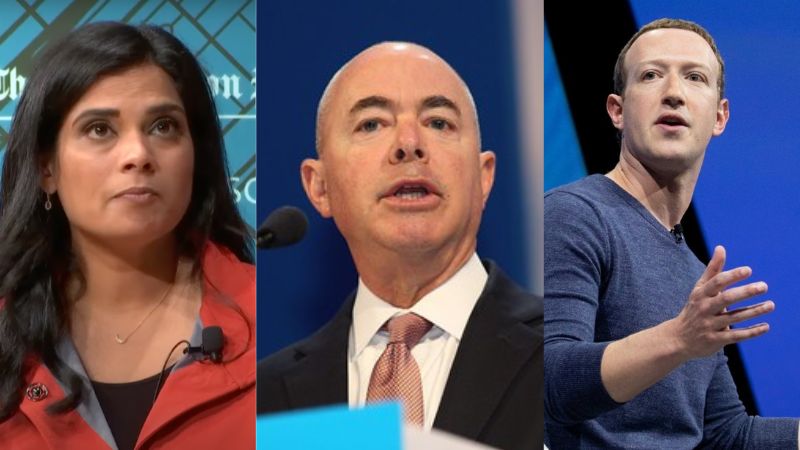 Libby Emmons Brooklyn NY
Oct 31, 2022 minute read
ADVERTISEMENT
ADVERTISEMENT
The Department of Homeland Security has been working to influence big tech platforms. This became originally evident when the Biden administration launched the ill-fated Disinformation Governance Board early in 2022, but has been a focus of their efforts even beyond that now-defunct unit, and before.

Missouri Attorney General Eric Schmitt filed a lawsuit that revealed via appended meeting minutes that former Microsoft executive Matt Masterson, who was formerly an official with DHS, told a DHS director in February 2022 that "Platforms have got to get comfortable with gov't. It's really interesteding how hesitant they remain." This according to The Intercept.

Prior to 2020, it was reported that DHS met with Twitter, Facebook, Wikipedia, and other platforms in order to coordinate "content moderation" operations. These meetings were part of an ongoing initiative which saw collusion and collaboration between DHS and big tech to determine how "misinformation" would be dealt with on those platforms.

The Cybersecurity and Infrastructure Security Agency Act, signed by President Donald Trump, opened the door to this as it formed a new branch within DHS, which then undertook to deal with online "disinformation." CISA stated its understanding that the mission of that branch of DHS was "evolved," and meant to communicate their concerns on "disinformation" to social media companies. Social media companies took DHS' word for it.

DHS used concerns about "marginialized communities" to justify their reach.

Much of this effort became evidence as a result of an attempt to "fight disinformation" in the lead-up to the 2020 presidential election. Both Facebook CEO Mark Zuckerberg and then-Twitter CEO Jack Dorsey spoke about their platform's effort to suppress and censor reporting from the New York Post. They did this, in part, because the FBI had told these platforms to watch out for a "misinformation" dump.

During the elction, there were "weekly teleconference to coordinate Intelligence Community activities to counter election-related disinformation." Since then, meetings have taken place every two weeks.

This was specifically done with election information, which would be flagged by state election officials, submitted to DHS, which would then tell social media companies to pull it.

FBI official Laura Dehmlow stated her concern in March that big tech companies were not accountable to the government, saying "we need a media infrastructure that is held accountable."

"There is also a formalized process for government officials to directly flag content on Facebook or Instagram and request that it be throttled or suppressed through a special Facebook portal that requires a government or law enforcement email to use. At the time of writing, the 'content request system' at facebook.com/xtakedowns/login is still live. DHS and Meta, the parent company of Facebook, did not respond to a request for comment. The FBI declined to comment," The Intercept reports.

"The extent to which the DHS initiatives affect Americans’ daily social feeds is unclear. During the 2020 election, the government flagged numerous posts as suspicious, many of which were then taken down, documents cited in the Missouri attorney general’s lawsuit disclosed. And a 2021 report by the Election Integrity Partnership at Stanford University found that of nearly 4,800 flagged items, technology platforms took action on 35 percent — either removing, labeling, or soft-blocking speech, meaning the users were only able to view content after bypassing a warning screen. The research was done 'in consultation with CISA,' the Cybersecurity and Infrastructure Security Agency," The Intercept reports.

When the Hunter Biden laptop story broke, revealing the Biden family's influence peddling and shady overseas business dealings with Ukraine and China, social media platforms took the bait from the government and ditched the story. Countless other mainstream media outlets followed suit, going so far as to report on why they would not report on the story, citing "hacking," "misinformation," and a "Russian plot."

All of these were incorrect, and many outlets, including The New York Times, had to walk it back.

As a result of documents revealed in Schmitt's suit, it is now apparent that DHS officials were in fact "leading the push to expand the government's reach into disinformation," and that the government "also played a quiet role in shaping the decisions of social media giants around the New York Post story." Post-election polling showed that many Americans would not have voted for Joe Biden had they known the Hunter Biden laptop story was fact and not a disinformation plot.

The case that revealed the information was brought this spring by Missouri Attorney General Eric Schmitt and Louisiana Attorney General Jeff Landry against top administration officials in US District Court for the Western District of Louisiana.

It alleged that President Joe Biden and other administration officials "pressured and colluded" with Big Tech companies to censor the Hunter Biden laptop story as well as information regarding the lab leak origin theory of COVID-19 and the security of voting by mail.

The suit claimed that government officials of colluded with social media and big tech companies "under the guise of combating misinformation" and that the goal, and the goal, and the result, was censorship and suppression of free speech online. This discovery shows that the Attorneys General who brought the case.

Also named were the Department of Health and Human Services, the National Institute of Allergy and Infectious Diseases, the Centers for Disease Control and Prevention, the Department of Homeland Security, and the Cybersecurity and Infrastructure Security Agency.