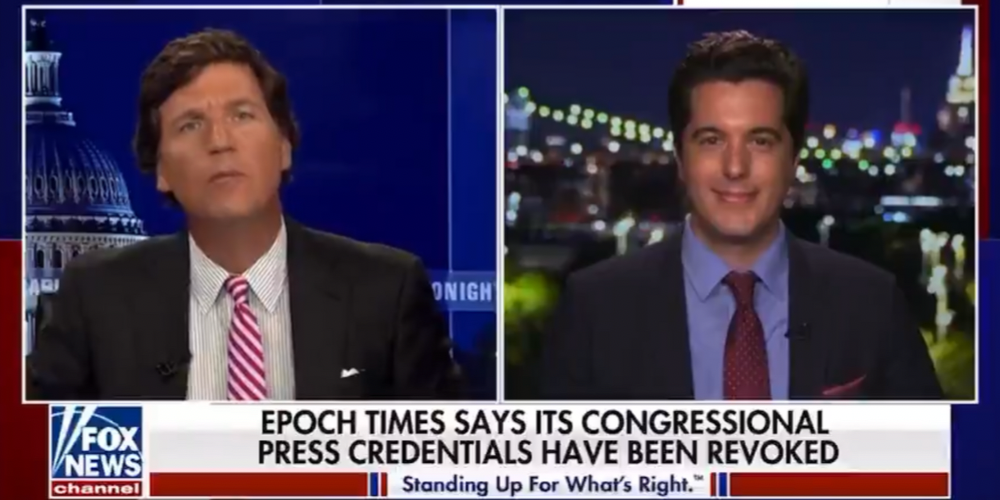 The Epoch Times' credentials were revoked by the House of Representatives press gallery, though Philipp said that they are yet to receive anything in writing pointing to specifically why this happened.

Chinese state-run media outlets including Xinhua and People's Daily, both associated with the Chinese Communist Party and its propaganda, still have their credentials and are allowed to cover Congress.

"There's a lot of hypocrisy here," said Philipp. "Because while they're banning the Epoch Times, they're letting in literal state run Chinese news outlets like Xinhua, People's Daily, and these news outlets are state-run by the Chinese Communist Party; Propaganda outlets allowed into our halls of Congress, while Epoch Times is not.

"What's your offense?" asks Carlson, adding that if it was because the Epoch Times is too "harsh" on the Chinese government. "Is that no longer allowed in the Congress?"

"It seems like that's a trend these days," replies Philipp.

A lot of news outlets, Philipp points put, are trying to "cozy up" with the Chinese government.

Philipp also points out that the Epoch Times is one of the harshest critics of the Chinese government, with the outlet breaking stories like the live organ harvesting of political and religious dissidents in China and the SARS outbreak.

"We've been a thorn in the side of the Chinese Communist Party for a long time," Philipp adds.

17 different Congress members have reportedly stepped forward to defend the Epoch Times in the wake of their press credentials being revoked. Philipp continues, "hopefully we'll get back in soon. We'll have to see."

"Yeah maybe a couple hundred more could step up in the next 20 minutes," Carlson adds.