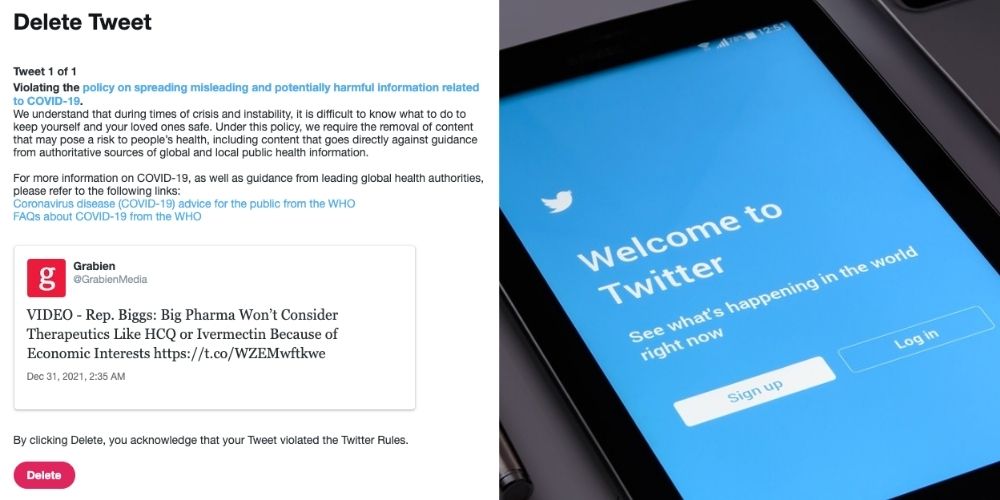 On Friday, media company Grabien was suspended from Twitter for posting a quote from a congressman regarding COVID-19 treatments.

Grabien founder Tom Elliott confirmed the suspension in a Tweet on Friday afternoon, stating that a quote from Rep. Andy Biggs was the offending post that brought about the suspension.

"VIDEO - Re. Biggs: Big Pharma Won't Consider Therapeutics Like HCQ or Ivermectin Because of Economic Interests," the post in question reads. Attached was a video with Biggs' statement.

The Centers for Disease Control and Prevention has advised against the use of ivermectin or hydroxychloroquine to treat COVID-19.

Elliott called the suspension "next-level Twitter absurdity," drawing parallels to other questionable suspensions he has been handed by the social media giant in the past.

"Obviously, in this case, quoting an elected leader on an issue that matters to everyone is important and newsworthy, regardless of whether you agree," wrote Elliott, who noted  "And I can't help but add that his basic point was once mainstream among progressives."

Elliott said that he has appealed Twitter's decision, noting the above argument in his appeal form, "However I have no confidence in Twitter doing the right thing and acknowledging this tweet did not violate its terms & conditions."

As of January 1, Grabien's account is still accessible on Twitter, but the company has been locked out due to the suspension.