Ada Yaeger is actually a former college student from Texas, an activist with ties to Marxist groups that are seeking to destroy America. 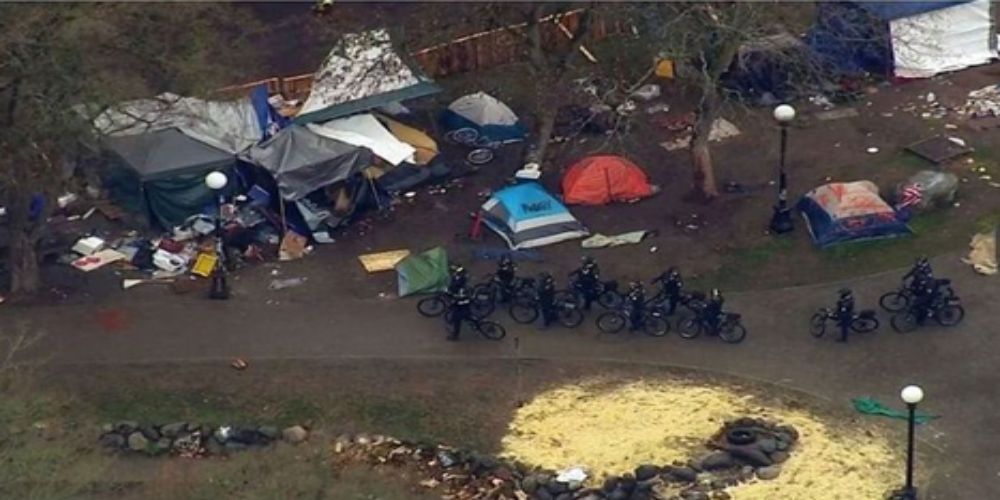 While the local media portrays Ada Yaeger as "unhoused" and "homeless," she is actually a former college student from Texas, an activist with ties to Marxist groups that are seeking to destroy America.

Two weeks ago, the Seattle Police Department (SPD) and Parks Department, announced that they would be clearing the massive homeless encampment in Cal Anderson Park. The park was the site of the infamous Capitol Hill Autonomous Zone (CHAZ) this summer.

Following the announcement of the clearing, activists moved into the park and began to construct barriers to protect their riot staging areas, not the dozens of tents in the park. Though they claimed to be protecting the homeless from SPD, many of those homeless people who were in tents accepted offers of shelter and services from the city and the police. Some of those who had been living in the park even accused the Antifa activists of assaulting them.

Attorneys for Ada Yeager, who had been living at the park, filed a lawsuit and argued that any clearing of the encampments violated her constitutional rights and could result in the damage or seizure of personal property by authorities.

The suit delayed the clearing of the park last Wednesday pending a judge’s ruling. The delay also gave Antifa and activists time to fortify their positions and install barricades in the park.

However, Yaeger is not part of Seattle’s homeless population. Like many living on the streets of Seattle, Yaeger came to Seattle from out of town, specifically in this case Dallas, Texas. As recently as July, Yaeger listed herself as a Dallas activist and a member of the Freedom Road Socialist Organization (FRSO).

According to their Wiki page, "FRSO isn't planning to defeat imperialism at the ballot box but by building up the people's movements and constructing an organization capable of leading a revolution. The defeat of Trump in the election will improve the conditions for these tasks."

The site attacks both Democrats and republicans and calls for the overthrow of capitalism and the United States, while praising communist dictators, red China, and the Soviet Union.

Yaeger likely came to Seattle to be part of the CHAZ this summer. That timeline would coincide with her online presence. Yaeger told the court that she had been living in a "protest encampment" in the park since the summer and been "...subjected to repeated harassment from the City of Seattle by way of 'sweeps'—a coordinated destruction and taking of personal property of unhoused citizens by Seattle Parks and Recreation and Seattle Police, two departments controlled and funded by Defendant City of Seattle."

According to Yaeger's social media she studied computer science at Jesuit College Preparatory in Dallas before coming to Seattle.

The lawsuit, filed on Yaeger's behalf by Mazzone Law Firm, asked the court to impose a restraining order against the city to stop the city from removing the encampment in the park. Yaeger was portrayed by the local media as a homeless camper with no other place to go. None of the Seattle media looked into her background or even at her social media profiles where all this was readily available.

Lawyers for Seattle argued that the people living in the park had been hostile to park-goers, police and park workers, citing safety concerns. In September, private security guards employed by a firm hired by the city to enforce park hours were threatened and chased away. Over the summer, an Antifa weapons cache was found in one of the park buildings during a previous clearing of an encampment. Spike strips, explosives, machetes and shields were found in the building.

Before the judge's ruling, a group of squatters took over an abandoned yellow house on Denny Way, at the northeast end of the park. They presented the media with a list of demands and though they claimed the action was in solidarity with the homeless, the occupiers did not invite the campers into the house with them.

US District Judge Richard Jones rejected the restraining order last Thursday and said that Yeager had offered little to no evidence that her rights to free expression or due process were violated. The ruling allowed the encampment to be cleared on Friday and a SWAT team to raid the yellow house.

The majority of the Black Bloc Antifa members left before the police arrived at Cal Anderson, leaving behind only a few dozen protesters. Activists screamed at the police during the cleanup and have spent the weekend attempting to regain a foothold in the park. It is presumed that Yaeger is still somewhere in the Seattle area.

The CHAZ attracted activists from all of the Pacific Northwest in July, as well as from across the country. It also attracted the neighborhood's homeless population and was the site of a gruesome murder suicide, allegedly committed by one of the campers. After CHAZ was dismantled, the homeless continued to return to the park as did Antifa activists who used the park as a staging area for ongoing riots in the city.