"This is what’s happening every single night here at our southern border in Arizona," said Savanah Hernandez. 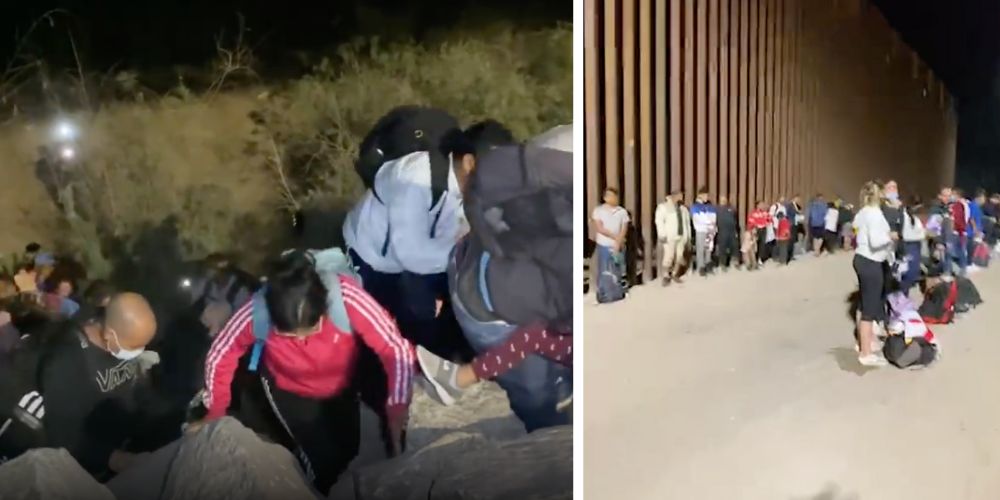 In the early hours of Tuesday morning, hundreds of illegal immigrants were seen flooding across the southern border near Yuma, Arizona.

Footage captured by independent journalist Savanah Hernandez showed individuals and families running through a gap in the tall fencing that separates the US from Mexico.

Hernandez said that when she first arrived at the scene, around 25 immigrants had passed through. Around an hour later though, that group had swelled in size, exceeding 100 people.

"I have been standing here watching people run from the Mexican side of border over here to the US," Hernandez said in videos posted to Instagram.

She noted that the group included people from Russia, India, Uzbekistan, and others from "all over the world."

There were reportedly six border patrol agents at the scene on the border, as well as two buses there to ship the "unprecedented numbers" of illegal immigrants away from the scene.

"This is what’s happening every single night here at our southern border in Arizona," she said.

Hernandez noted that a majority of the crossing occur between midnight and 5 am, before the heat of the day sets in in the desert.

"And just to give you guys an idea of how easy it is to illegally get into the US, there is the end of the border wall. And we’ve been watching people continue to run in, walk in, border patrol extremely overwhelmed," she said.

When it was just the group of 25 people, Hernandez said that it took agents around an hour to process them.

The immigrants crossing the border were handed plastic bags when they enter the US, with agents attempting to organize them into groups by origin country based on passports.

"It seems that border patrol is severely overwhelmed and have a couple agents for what is now well over 100 people at the southern border," she said.

Hernandez said she spoke with US Customs and Border patrol, who said that these large groups crossing the border is a "nightly occurrence.’

"Border Patrol can process about 45 people at a time, so we have hundreds that are currently waiting," she said, noting that it was around 5 am at that point.

"Border Patrol saying that some people are waiting upwards of eight hours because they are so overwhelmed. This is what the Biden administration is allowing to prosper at our southern border."

In another video captured by Hernandez, a large group of illegal immigrants was seen scrambling up over rocks to the US, some carrying bags and children.

The scene mirrored one captured on video earlier this month, where over 800 illegal immigrants, mostly men, were seen crossing through the same area.

The US is quickly approaching another record year of illegal immigration. 1,734,686 people were encountered by US Customs and Border Patrol during the 2021 fiscal year, which begins in October, according to CBP data. In the 2022 fiscal year so far, 1,536,899 people have been encountered so far, with monthly numbers showing no signs of slowing down.