"[President Trump] has got to condemn this sh*t ASAP. The Capitol police tweet is not enough," Donald Trump Jr. texted Meadows. 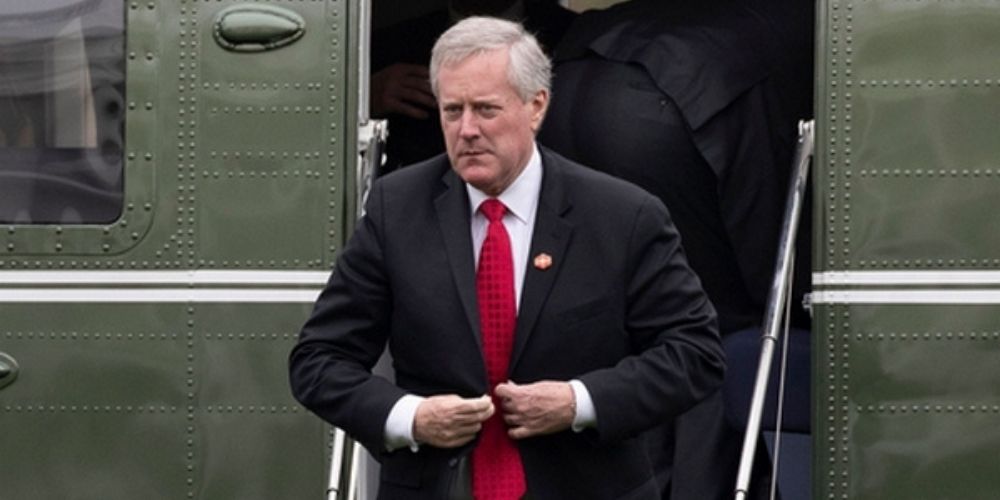 On Monday, Nancy Pelosi's Committee on the January 6 Attack released text messages that had been sent to former Trump Chief of Staff Mark Meadows as the events of Jan. 6 were unfolding, frantically urging him to get the the president to "condemn this sh*t." The messages came from Fox News media pundits, as well as from Trump's son Don Jr., and far from being supportive of the riot, they condemned it.

As part of these text messages presented, Rep. Adam Schiff displayed a text message from a Congress member that he claimed was a suggestion Meadows instruct former Vice President Mike Pence to overturn the 2020 presidential election results.

According to The Federalist, this message is doctored, with punctuation added where there was none, and two paragraphs omitted from the original message.

The original message contained portions of a text written by Washington attorney and former Department of Defense Inspector General Joseph Schmitz. It included an attachment of a four-page draft Word document that detailed Schmitz's legal reasoning for suggesting Pence had the authority to object to some electoral votes.

"On January 6, 2021, Vice President Mike Pence, as President of the Senate, should call out all the electoral votes that he believes are unconstitutional as no electoral votes at all — in accordance with guidance from founding father Alexander Hamilton and judicial precedence," Schmitz texted to Rep. Jim Jordan on the evening of January 5, alongside a three paragraph summary of his Word document.

"In his graphic, Schiff erased the final clause and the em dash preceding it and added a period to the first clause without disclosing that he or his staff had chopped up the text and created a fake graphic misrepresenting the actual contents of the text message," wrote The Federalist.

"'No legislative act,' wrote Alexander Hamilton in Federalist No. 78, 'contrary to the Constitution, can be valid.' The court in Hubbard v. Lowe reinforced this truth: 'That an unconstitutional statute is not a law at all is a proposition no longer open to discussion.' 226 F. 135, 137 (SDNY 1915), appeal dismissed, 242 U.S. 654 (1916)," Schmitz continued in the paragraphs omitted from Schiff's message.

Those close with Jordan stated that the long winded text message was unlike his usual texting style.

"The idea that Jordan would sit down and punch out a long-winded legal argument via text is absurd," one individual who regularly talks to Jordan told The Federalist. "That’s just not how he works."

The select committee's vice chair, Rep. Liz Cheney, read text messages from a number of individuals including Fox News hosts, stating that the messages "leave no doubt that the White House knew exactly what was happening here at the Capitol," according to the Daily Mail. However, the messages condemning the riot, which show surprise and horror, were from those who the Committee has blamed for planning it.

"[President Trump] has got to condemn this sh*t ASAP. The Capitol police tweet is not enough," Donald Trump Jr. texted Meadows.

"Donald Trump Jr. texted again and again urging action by the president, 'We need an Oval Office address. He needs to lead now. It has gone too far and gotten out of hand,'" Cheney told the committee.

In August, Trump Jr. was named as one of those the select committee wanted all communications from on January 6. Their assumption was that he was part of the "planning," despite the FBI having concluded in their investigation that there was "scant evidence" that any incursion into the Capitol Building had been pre-planned.

Cheney read out the messages from Donald Trump Jr., which showed that neither he, nor his father's chief of staff, were even remotely on board with what was happening.

"Mark, the president needs to tell people in the capitol to go home, this is hurting all of us. He is destroying his legacy," "The Ingraham Angle" host Laura Ingraham texted Meadows.

"Please get him on TV. Destroying everything you have accomplished," "Fox & Friends" host Brian Kilmeade wrote to Meadows.

"Can he make a statement? Ask people to leave the capitol," "Hannity" host Sean Hannity wrote.

Fox News came under attack following the riot on January 6, with outlets stating that the news channel used "heated rhetoric" which led to the "insurrection" that day.

But it appears from these text messages that while many pundits supported Trump and his administration, they in no way advocated for a riot. Media outlets proffered the idea that those pundits that dissented with the mainstream narrative were working to stage some kind of coup. In fact, they opposed riots and felt that the happenings at the Capitol on that day were not good for the nation.

NPR wrote that "the network that has helped shape conservative politics in the U.S. for more than two decades has yet to acknowledge how the heated rhetoric radiating from its shows and stars may have helped inspire the pro-Trump rampage."

NPR, Rep. Liz Cheney who read the messages into the congressional record, and others on the committee want to hold media accountable for the events at the Capitol on Jan. 6, but the texts do not uphold that view.

The outlet stated that "Comments from prominent Fox News hosts and guests had helped stoke the MAGA mob's fury for the two months following the November elections."

On Monday night, after laying their case against Meadows, the select committee voted unanimously, 9-0, to recommend contempt charges against the former Chief of Staff.

Chairman Bennie Thompson insisted that Meadows "hasn't left us any choice," following his decision to no longer cooperate with the committee.

Appearing on Hannity Monday night, Meadows claimed the investigation was an excuse to go after Trump "once again," calling it a "Sham and a "waste of your time and money," referring to the viewers and American taxpayers.

"It's disappointing, but not surprising," Meadows told Hannity, referring to the committee's vote.

"Let's be clear about this, this is not about me - holding me in contempt. It's not even about making the Capitol safer. We've seen that by the selective leaks that are going on right now. This is about Donald Trump and about actually going after him once again," Meadows said.

Meadows pushed back against one of the committee's pieces of evidence used against him: an email sent by Meadows on January 5 stating that the National Guard would be present the following day to "protect pro Trump people."

Meadows suggested that the committee was trying to "spin some nefarious purpose," stating that the email was merely meant to ensure a "safe environment" at the event occurring the next day.

Defending his lack of cooperation with the committee, Meadows said: "I can say that when you look at the criminal component of the intent, there's never been an intent on my part."

"I have tried to share non-privileged information but truly, the executive privilege that Donald Trump has claimed is not mine to waive, it's not Congress' to wave, and that's why we filed the lawsuit to hopefully get the courts to weigh in - hopefully they will weigh in," he continued.