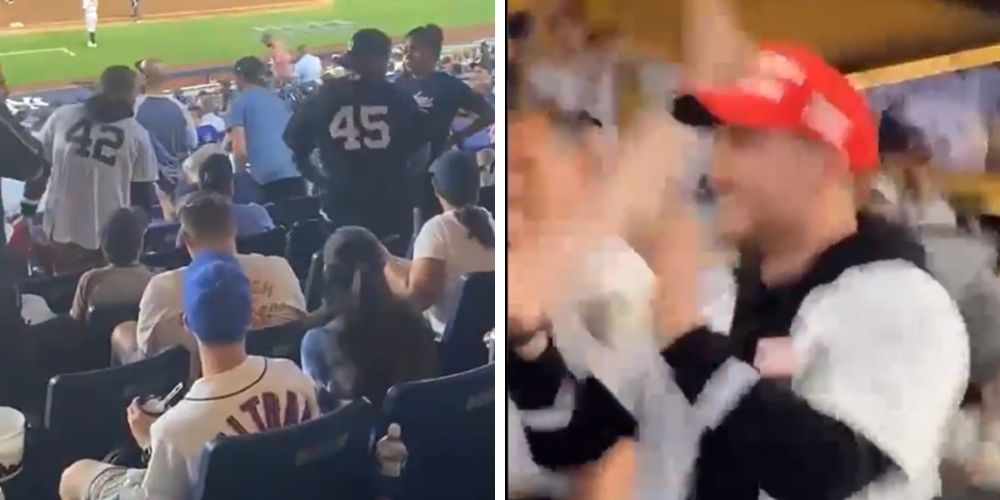 A video has emerged of the moments after one fan tried to steal another fan’s MAGA hat during the Mets vs. Yankees subway series at Yankee Stadium this week.

In the first video, filmed after the hat was taken off by the Yankee fan to prevent it from being stolen again, in the notoriously blue city, people in the New York crowd can be heard chanting "Trump 2024!"

The video then switched to the videographers, who appear to be friends, one wearing a Mets jersey and the other wearing a Yankees jersey as they chant "Trump 2024!" and "Put it back on!"

When the angle switches back to the alleged victim, a police officer can be seen in the lower level, talking to the man with the MAGA hat, before the office turns and begins addressing someone off camera.

In another video, taken by a different fan, the officer can be seen speaking to a man in a Yankees jersey, who appears to be the only fan masked in the section, and is gesturing angrily at the officer.

The crowd erupted into cheers as the man finally put the hat back on. The would-be thief, ironically with the number 45 on his jersey, was allegedly kicked out of the stadium.

As the would-be thief is being escorted out of the section by the officer, his female companion gets into an altercation with someone sitting with the MAGA hat wearing fan.

The alleged victim identified as Hunter tweeted, "Thanks everyone for the moral support, it’s especially necessary during this period where we’re inundated with the narrative that Trump isn’t well liked. Stand strong and don’t be shy about expressing your political beliefs."

He later retweeted the first video and said, "Use this as a lesson for life , never cower to the mob nor bend the knee. I’ll continue wearing my hat and that’s what makes America so great. God bless @lilcrappo @gcurrycge the patriots who filmed this and narrated it like professionals."

The Mets bested their crosstown rival, taking two of three games in the series.