"Wonderful meeting with the Big Lady ... Can’t wait to tell you about it," Nader reportedly wrote. 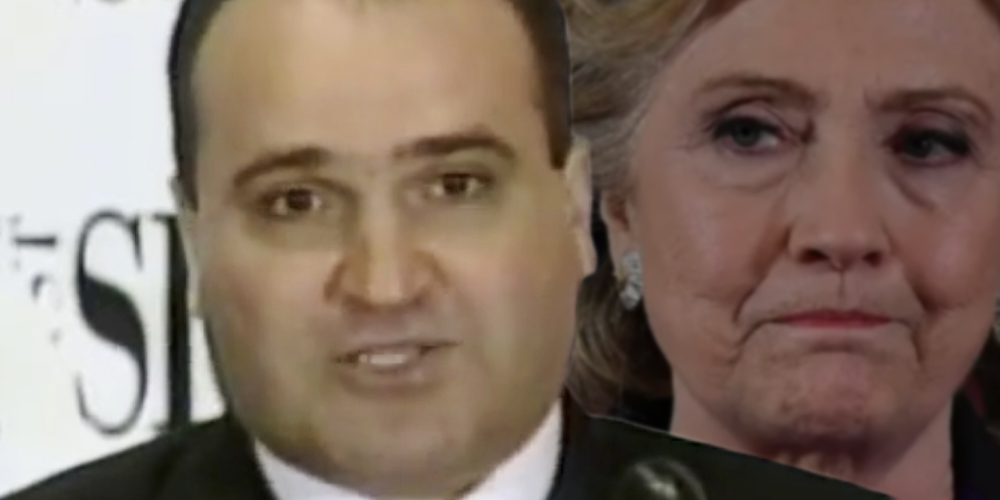 A new report names lobbyist George Nader as having pleaded guilty to helping funnel $3.5 million dollars to the 2016 Clinton campaign. He did it to help the United Arab Emirates gain influence in Washington DC, on behalf of Prince Mohammed bin Zayed.

George Nader, a "lifelong" pedophile, was first convicted in in Czech Republic in 2003 of sexually abusing ten children, for which he only served one year in prison. He committed his crimes between 1999 and 2002. In 2020, Nader admitted to possessing child pornography and bringing an underage boy for "commercial sex." Explicit videos depicting the rapes of toddlers were discovered on his phone in 2018, when FBI agents examined his devices on their probe into election meddling, The Independent reported.

While the likes of CNN and Politico at the time Nader was first charged emphasized connections to the Trump campaign and Mueller probe – it was the Clinton aspect of this operation that did him in.

Reporting on the matter connects Nader to the Hollywood A-List efforts to fundraise on behalf of Democrats.

In December 2019, the Washington Post highlighted the story, describing George Nader as a "key Mueller witness" being charged, when talking about the initial charges and millions of dollars funneled to both candidates.

Nader’s accomplice Andy Khawaja got access to both the 2016 Clinton campaign and the Trump White House after he was elected. George Nader’s role was as the guy who gave Khawaja the money, while Nader himself reported back to the UAE.

Khawaja had a previous track record beforehand. Back in 2010 he gave up over ten million USD to the FBI over an online gambling racket set up in Manhattan, and allegations it was used for money laundering.

According to The Intercept, George Nader pleaded guilty in December 2021 to trying to buy elected US officials with millions of dollars through illicit campaign contributions during the 2016 election.

In legalese the charge is a felony conspiracy charge to defraud the US government with this financial influence campaign.

For months, authorities wanted answers on who Nader was targeting and why he hid where his money came from.

Prosecutors were able to put together a case highlighting how Nader transferred roughly $5 million USD from a business in the United Arab Emirates to a company in Los Angeles. The Intercept says "more than $3.5 million" of that cash was dedicated towards the Clinton campaign and Democrat committee allies.

But in the big picture, officials claimed Nader was playing both sides of the aisle to "lobby on behalf and advance the interests of his client, the government of the United Arab Emirates." This money was given to Nader by the UAE government and it’s the first prominent case of the country trying to bribe the United States via the elections process.

Others were charged in the money funneling scheme. Ahmad Khawaja served as Nader’s accomplice stateside at the Los Angeles payment processing firm.

When it comes to greasing the Clinton campaign, prosecutors highlighted Khawaja complained that Nader was slow on the draw to help bankroll a Clinton fundraiser effort. Nader replied that he was working at the discretion of "his highness" over in the UAE.

But Nader was reportedly ecstatic to meet Bill and Hillary Clinton:  "[T]raveling on Sat morning to catch up with our Big Sister and her husband: I am seeing him on Sunday and her in [sic] Tuesday Sir! Would love to see you tomorrow at your convenience…for your guidance, instruction and blessing!"

One of the highlighted Clinton fundraisers mentioned in the case of George Nader and Andy Khawaja happened in August 2016. It was a star-studded event with Disney executives and Hollywood actors at the helm.

Efforts were also made to influence "key figures" in the Trump campaign as well. To that end, Khawaja donated a million dollars to the former President’s inaugural committee.

Nader was previously targeted by federal authorities in June 2019 over possessing child pornography. At least one related charge to that stuck, as well as a charge for sex-trafficking a 14-year-old boy to the US. It amounted to ten years of prison time on it’s own, as well as having to register as a sex offender.

It’s expected that this new charge of fraud will be tacked on to Nader’s prison time, and prosecutors want him to face five years for it.