In 2015, a private equity firm cofounded by Hunter Biden bought a stake in the Sinopec Marketing valued at $1.7 million. 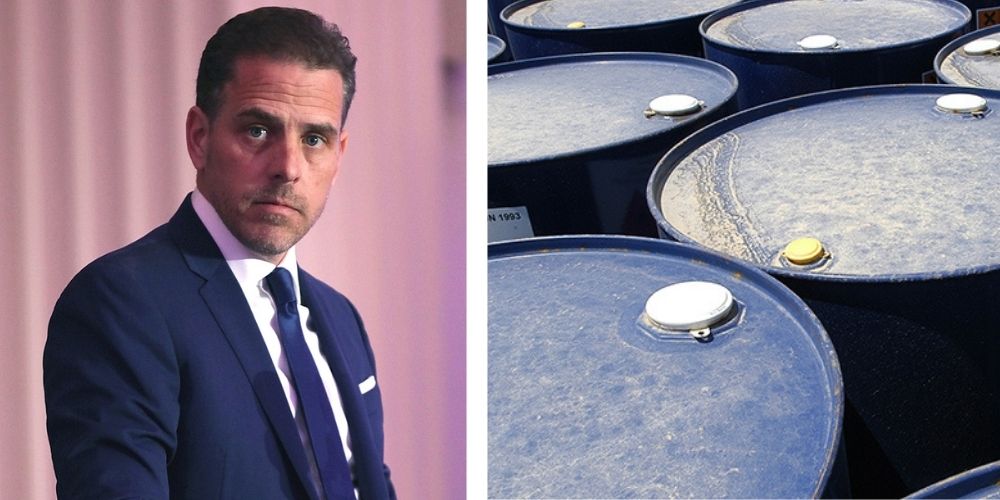 Following Wednesday’s news that millions of barrels of oil released from America’s Strategic Petroleum Reserves were shipped overseas to China, India, and Europe, it has been revealed that nearly one million barrels of oil were sent to a Chinese energy company in which President Joe Biden’s son, Hunter Biden, had a stake as recently as 2015.

On Wednesday, Reuters revealed that more than five million barrels of crude oil that were expected to be put into use in the US to bring down skyrocketing prices at the pump were instead sent to European nations, India, as well as China.

In April, the Biden administration announced that 950,000 Strategic Petroleum Reserve barrels would be sold to Unipec, the trading arm of the China Petrochemical Corporation. Commonly known as Sinopec, this company is wholly owned by the Chinese government, according to the Washington Free Beacon.

The sales of these barrels, as well as others as part of the sales of 30 million barrels in total, "will support American consumers and the global economy in response to Vladimir Putin’s war of choice against Ukraine," the Department of Energy said in a statement, as well as "address the pain Americans are feeling at the pump as a result of Putin’s Price Hike and to help lower energy costs."

Speaking with the Washington Free Beacon, Power the Future founder Daniel Turner blasted the Biden administration for selling "raw materials to the Communist Chinese for them to use as they want."

"We were assured Biden was releasing this oil to America so it could be refined for gasoline to drive down prices at the pump. So right off the bat, they're just lying to the American people," Turner told the Washington Free Beacon. "What they're saying they did and what they did are not remotely related."

Turner noted that the decision to sell to Unipec highlights the Biden family's "relationship with China."

In 2015, a private equity firm cofounded by Hunter Biden, Bohai Harvest RST, previously owned a stake in the Sinopec Marketing valued at $1.7 million.

According to the Washington Free Beacon, "Sinopec went on to enter negotiations to purchase Gazprom in March, one month after the Biden administration sanctioned the Russian gas giant."

In addition, Unipec has stated it would purchase "no more Russian oil going forward" once "shipments that have arrived in March and due to arrive in April" were fulfilled, but it was revealed that in May, the company "significantly increased the number of hired tankers to ship a key crude from eastern Russia," according to Bloomberg.

Speaking with RealClearPolitics, a spokesperson for the Department of Energy defended the final destination of some of the barrels released from the Strategic Reserves, saying that energy markets are international, and that the department couldn’t dictate what happens within these markets.

"Oil is a commodity traded on the global market, and while the United States government does not control oil and gas companies, the commodity the industry sells or the market, the SPR remains a critical energy security tool to address global crude oil supply disruptions," the spokesperson said in a statement.

They added that the emergency release from the Strategic Reserves had helped “keep our economy running and mitigate the pain Putin is causing at the pump."

The spokesperson noted that domestic oil and gas companies "are eligible for sales and exchanges from the SPR and have benefited from the releases to date." Recent reports have revealed that foreign companies benefit as well.

RealClearPolitics reported that "In the face of such criticism, administration officials continued to insist that they can’t control what private companies do, and the oil that went overseas appears to be a small fraction of the total released from the national reserve thus far."

"Once oil is released from the Strategic Petroleum Reserves, current US law allows for companies that are registered to purchase it to then sell it on the market, including to adversaries like China," Heritage Foundation energy analyst Jack Spencer told RealClearPolitics.

Spencer noted though that "Americans are absolutely justified in asking why these valuable reserves, ostensibly for use in US national emergencies or to advance US national security interests, are going to unfriendly countries."

"Releasing oil from the SPR does not address the fundamental supply problems caused by Biden’s policies, and the market knows it. Similar to other gimmicks like suspension of the gas tax, it will have no sustainable market impact," Spencer concluded.