New York Governor Andrew Cuomo blames New Yorkers for the spread of Covid-19. He said that there's a "direct result" between New Yorker's actions and the increase of cases. 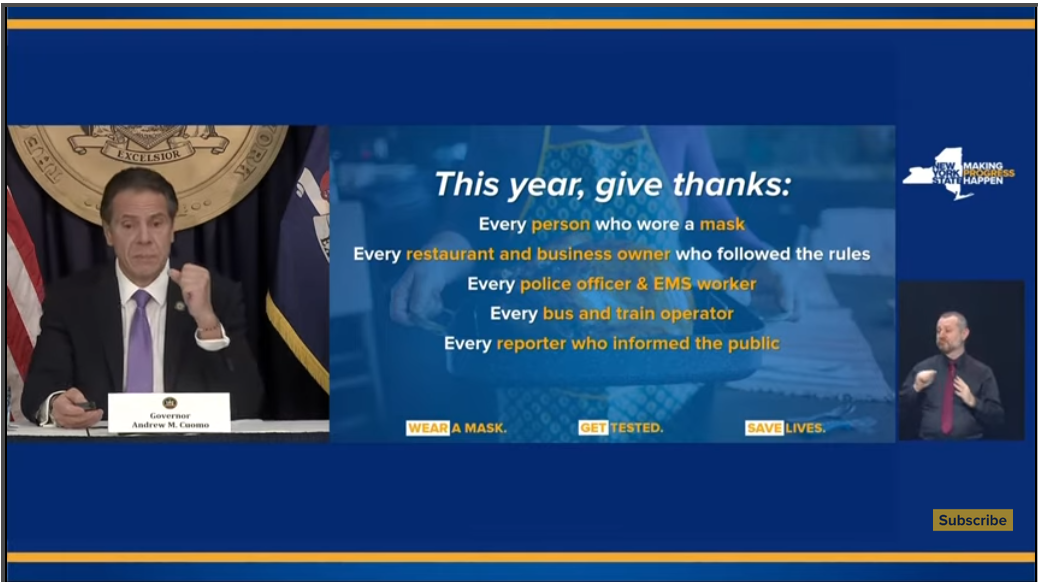 New York Governor Andrew Cuomo blames New Yorkers for the spread of COVID-19. He said that there's a "direct result" between New Yorker's actions and the increase of cases.

"There is no predetermined result here, it is a result of our actions, period. You tell me what New Yorkers do today, I will tell you the infection rate tomorrow. It's a direct result. We are in a place now where there is a bad synergy," he said.

He mentioned "Covid fatigue," and said that the feeling that "isolation is depressing," as well as the promised vaccine, are both rationalizations for people making bad decisions that spread the illness. Cuomo said that these are not good reasons to stop living our lives in isolation, far from others, without those we love but do not live with.

"Put that together with the fact that the cases are already on in increase, and we are now coming into the high social season, Thanksgiving, Christmas... social activity goes way up in this season. That is a bad combination," he said.

"This is a toxic cocktail of dynamics and facts," Cuomo said. "First, we are already in bad period," he said, noting that there had been an increase in cases and hospitalizations.

He encouraged New Yorkers to be guided by fear, and cowed by recollections of the spring, when both case counts and deaths far surpassed what the City and region are now experiencing.

"New York state is only at 3 percent infection rate, we're fine, we're only at three percent," he said, mimicking his detractors who downplay his concerns.

"You're right," he said, "we're only at three percent... But that can change in an instant."

"But remember how we got here. It took alot of effort and alot pain for us to get to this point. How quickly can we forget what we just went through several months ago? We went to three percent, we got down to three percent because we went through the New York PAUSE Plan, which had never been done before."

"It required tremendous energy and effort and loss and pain. We were at a 50 percent infection rate. Fifty percent. And we brought it down from 50 percent to one percent through a tremendous, unprecedented effort. How do you forget all the pain that we went through?" He said.

"We have to remember that, because if we're not careful we will go back there."

He recalled the dark days of spring, mentioning the cemeteries and funeral homes, but not the nursing homes, which assuredly he'd like to forget given the stain they are on his record. Cuomo issued a directive in March to return Covid-positive patients to nursing homes after hospitalization.

"We ran out of cemetery space," he said, "and in New York City they were burying people on Hart Island. How doesn't that chasten us and frighten us," he said, "it frightens me. I remember it like it was yesterday."