WATCH: 'The word got out that the doors are open' at the US-Mexico border: Reporter

"So people are coming from all over the world because they realize that if they get on this side of the border, their life is gonna be different." 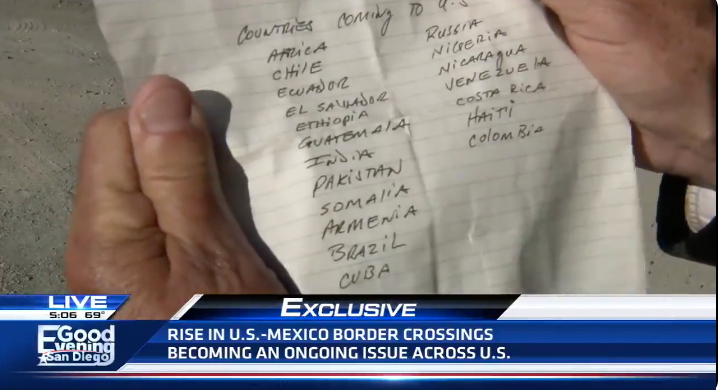 "The bottom line is that there is a crisis happening at our border right now, and the policies of the Biden administration essentially say 'come on in,'" said the KUSI San Diego reporter.

"I showed you this list at four o'clock, and this is the list of countries of all the people that are coming in," he continued. "This isn't just Central America and Mexico."

"The word got out that the doors are open."

The reporter went on to list a number of countries of origin for people crossing the southern border.

"This list the border patrol made for me, it starts with Africa, and Chile, and Ecuador, or El Salvador, Ethiopia, Guatemala, India, Pakistan, Somalia, Armenia, Brazil, Cuba, it goes on and on, Russia, Nigeria, I mean Costa Rica, Haiti, and Colombia."

"So people are coming from all over the world because they realize that if they get on this side of the border, their life is gonna be different."

Border crossings have surged since President Joe Biden took office in January, with many blaming his administration and rhetoric for the sudden increase.

The border crisis has particularly resulted in the overcrowding of migrant detention facilities, with a number of facilities far exceeding capacity. Many Republicans have accused the Biden administration of hypocrisy, with many of the images leaked from these facilities being eerily similar to images of border facilities seen under the Trump administration, during which critics began referring to the border control policy as "kids in cages."

Migrants have even been seen sleeping in open air camps set up under bridges as the government scrambles to find places for the migrants to stay. The established detention facilities themselves often don't look much better, with many describing the situation in general as a humanitarian crisis.