Carlson said that "at least 36 batches of mail-in ballots... were double counted in Fulton County," for a "total of more than 4,000 votes." 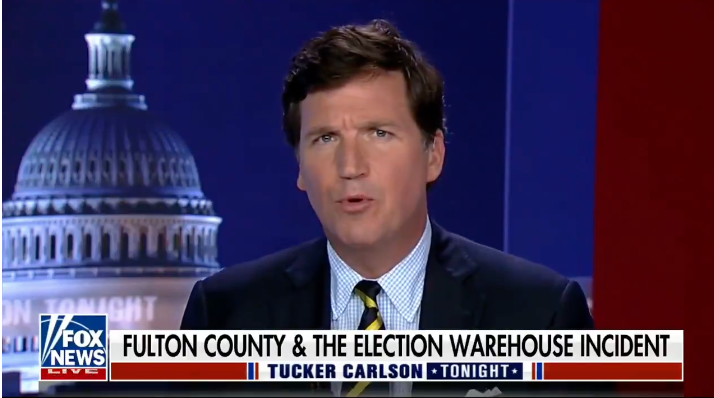 Tucker Carlson on Wednesday said that there was possible evidence of voter fraud in Fulton County, Georgia.

The first piece of the puzzle was that a warehouse that holds over 140,000 absentee ballots was broken into. "Depending on who you ask, the building contains evidence that either confirms or refutes the claim that voter fraud affected the outcome of the 202o election in the state of Georgia."

Joe Biden won the presidential election by less than 13,000 votes. Fulton County officials, Carlson said, haven't allowed the public to see those absentee ballots that were contained in the warehouse. A lawsuit has been filed for the right to see the ballots. He has seen some, and "it demands and explanation," Carlson said.

Carlson called on the truth to be exposed, for the facts to be laid bare. But, he noted, that this transparency is being obfuscated by none other than election officials in Fulton County. Rob Pitts, an election official, said "it was not necessary to look at the ballots," saying that it was "ridiculous" to want to see them at all.

Pitts reiterated what the Biden administration, and leading Democrats, have said, which is that audits, recounts, and certifications are good enough reasons to "stop already." Courts have ruled that the ballots should be kept in that warehouse.

"Except that's not true," Carlson alleges. "It now appears there was meaningful fraud in Fulton County, Georgia, last November. That is not a conspiracy theory, that is true."

As for the facts, Carlson said that "at least 36 batches of mail-in ballots... were double counted in Fulton County," for a "total of more than 4,000 votes." The final tally "from the double-count," Carlson said, "amounts to more than 3300 votes for Joe Biden and 865 votes for Donald Trump."

The AJC also ran comment from County Commission Chairman Robb Pitts who said "allegations of widespread fraud are based on the 'big lie' that the presidential election was illegitimate."

Evidence was given in a press conference on Tuesday, which Carlson showed on his broadcast.

Fulton County has claimed that these were "isolated incidents" and that the errors were caught in previous recounts. But video shows that a woman running the same ballots through a counting machine over and over. Fulton County has refused to provide more than 100,000 tally sheets that would show the counts that were done.

Once they did turn them over, the Voter GA auditors found "Seven falsified audit tally sheets containing fabricated vote totals... For example, a batch containing 59 actual ballot images for Joe Biden 42 for Donal Trump... was reported as 100 for Biden and 0 for Trump."

"How is that not flat-out criminal fraud?" Carlson asked. He tracked through a whistleblower account of her tally of mail-in ballots which showed no creases on the ballots that has presumably come in envelopes through the mail. There were additional irregularities that are troubling, Carlson reported.

Data from the USPS found that Georgia voters who had moved and were not eligible to vote in their old counties voted there anyway.

"Without answers to legitimate questions like the ones we just posed, and those are legitimate questions, democracy dies. People begin to understand that they system they've been told is on the level is in fact rigged. And when they believe that, God knows what they do next. So let's find out what actually happened," Carlson said.

"It's our right to know, and it's our responsibility to know," he said.

The Federalist reported on Thursday that findings show 10,300 illegal votes were casted in Georgia, and with more expected to be discovered, the numbers could exceed Biden's 12,670 vote lead.

And in a statement on Wednesday, former President Trump said "The news coming out of Georgia is beyond incredible. The hand recount in Fulton County was a total fraud! They stuffed the ballot box—and got caught. We will lose our Country if this is allowed to stand."