Two suspects are reportedly in custody after a mass shooting at a Portland Antifa gathering left one dead and five injured. 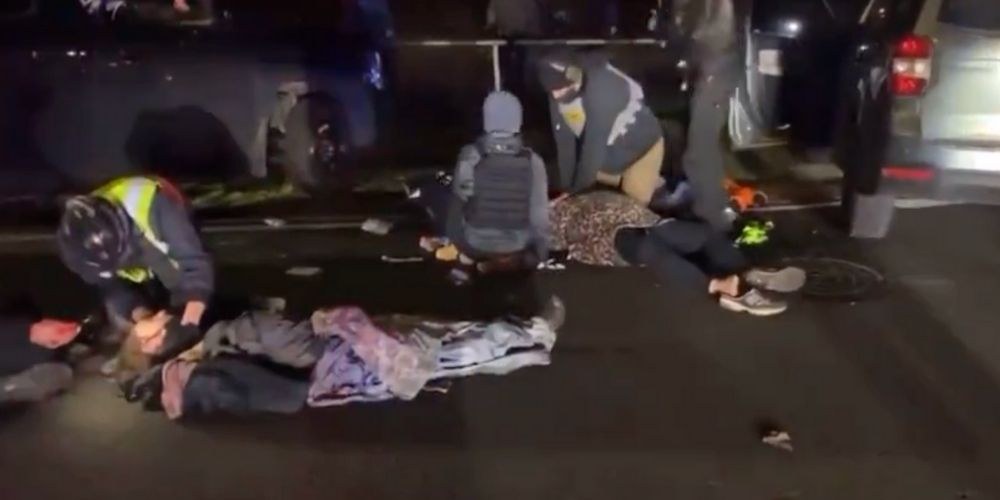 A mass shooting late Saturday night has left one dead and five injured after Portland-area Antifa held a gathering in solidarity with Amir Locke, a 22-year-old black man who was shot by police in Minneapolis earlier this month.

A woman was pronounced deceased at the scene, and two men and three women were taken to nearby hospitals, according to the New York Times. Two suspects are reportedly in custody in response to the shooting, according to KPTV.

The shooting occurred at around 8 pm near Normandale Park.

Tweets from Antifa members and groups told far-left comrades that were present not to talk to police investigating the shooting, to delete evidence posted on social media, and to keep posts including photos, videos, and first-hand accounts related to the incident to a minimum "so that you don't receive a knock."

Antifa "journalist" Melissa Lewis, who was a co-plaintiff in a failed frivolous "Antifa troll" lawsuit filed in federal court against The Post Millennial's editor-at-large Andy Ngo, said that "[o]ne of us got a chunk of the shooter."

In response to the shooting, Antifa members claimed that Ngo posted a flyer about the event and was involved in the shooting. Ngo has disputed these false claims.

In response to the wild accusations, a number of Antifa members are calling for Ngo to be killed, and that the journalist has blood on his hands. Ngo, who extensively covers far-left activity, has been a frequent target of Antifa violence.

One of these members is Marysa Leyva, whom Ngo describes as "a Phoenix-area militant #antifa member & a traveling nurse who is now in Portland" and "used to run @antifash_m but was so extreme that she was permanently suspended. Now she's evading that ban with a new account calling for violence."

On Sunday afternoon, the Portland police attempted to hold a press conference in regards to last night's shooting, only to have it hijacked by Antifa members Hailley Nolan and Dustin Ferreira, according to Ngo.

Ferreira said that they waited 20 minutes for an ambulance to arrive last night to tend to those who were injured or killed. Nolan said they have been receiving threats from "white supremacists" and claimed these people attacked last night.

"I'm not going to stand here and let these cops lie when they are sending Gypsy Jokers to kidnap us, when they are sanctioning this violence against us. As Ted Wheeler is telling these white supremacists to stand back and stand by," Nolan said, referring to a comment made by former President Donald Trump during a 2020 presidential election debate, in which the 45th president was pressed to condemn violence by right-wing groups like the Proud Boys.

Someone in the crowd began shouting, "Andy Ngo."

"Say his name with me," he continued, spelling out Ngo's name.

"Andy Ngo, doxing us. You guys are letting these white supremacists terrorize us in our own city," Nolan said.

"We've been out here, two years, protesting against police sanctioned violence. And y'all are killing us. These police are killing us," she continued, pointing once again to the law enforcement officer next to her.

The officer walked to the microphone after Nolan left the stage and said while people yelled over him: "So it doesn't look like we'll be able to continue. If you guys want to give them a voice that's good. I don't think I will be able to speak today."

"You're a f*cking coward," the crowd yelled as he left the stage.

An update released by the Portland Police Department Sunday afternoon revealed that the shooting suspect is believed to be an armed homeowner.

They noted that the scene was "extremely chaotic" and that a number of witnesses at the scene were "uncooperative" with officers that responded.

"Most people on scene left without talking to police," they wrote. "Detectives believe a large number of people either witnessed what happened, or recorded the incident as it unfolded. This is a very complicated incident, and investigators are trying to put this puzzle together without having all the pieces."

The New York Times piece regarding the incident pointed to the potential for violence from counter protesting groups. One of these accounts that they cited reportedly is one that has 0 followers.