140 House Republicans may vote against certifying the Electoral College vote on Jan. 6

Jake Tapper noted on Thursday that two House Republicans have confirmed to him that "at least 140 Republicans" in the will oppose the certification of the electoral college votes on Jan. 6 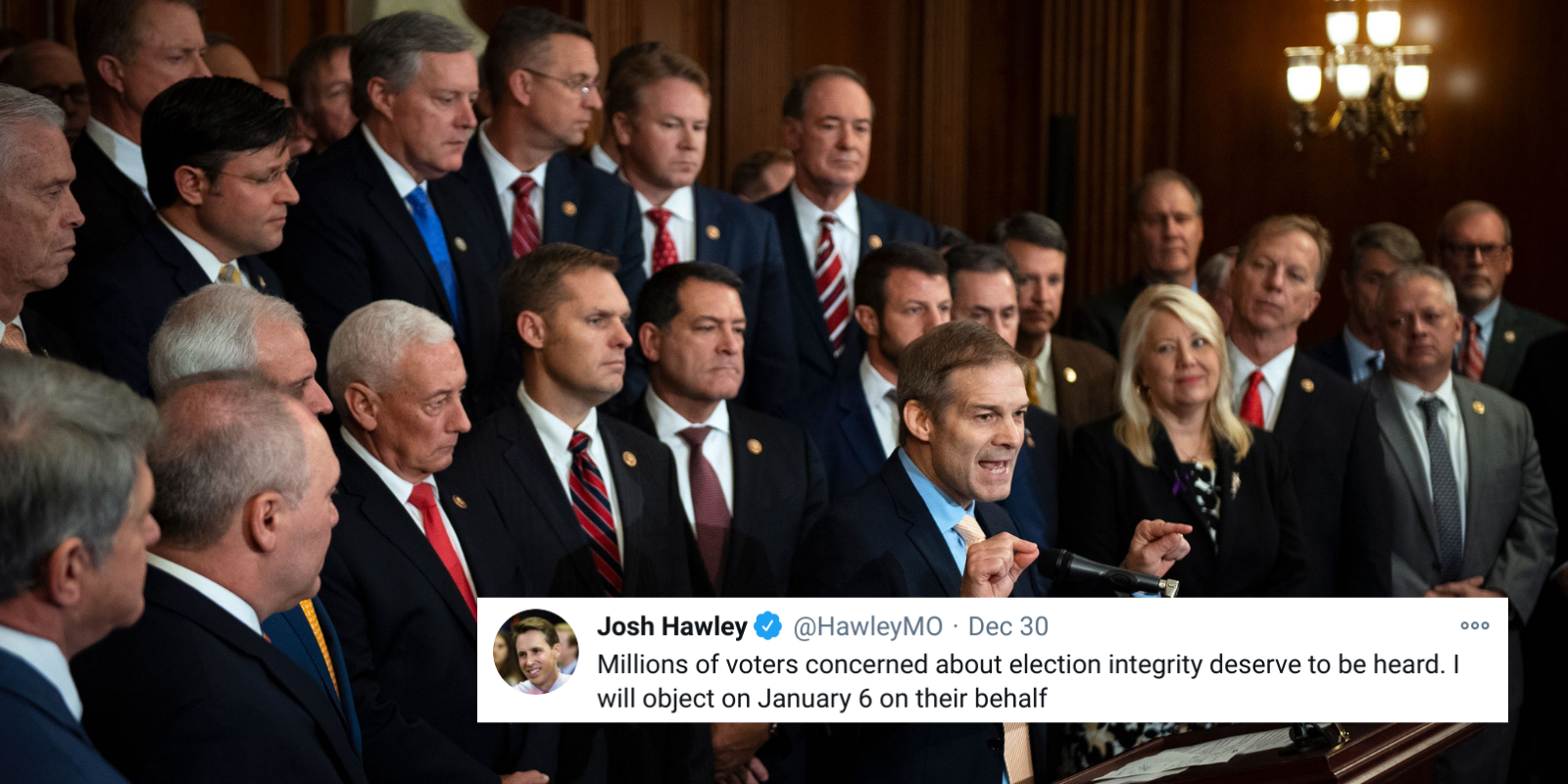 Jake Tapper noted on Thursday that two House Republicans have confirmed to him that "at least 140 Republicans" in the will oppose the certification of the Electoral College votes on Jan. 6.

The Electoral College has already voted for Joe Biden to attain the Oval Office over Donald Trump, the result of a tight contest, but the results of that vote are still to be certified prior to Biden taking power.

It was on Wednesday that Senator Josh Hawley issued a statement that he would not vote in favor of certifying the results. He was widely criticized for this, but said that he was fighting for "Millions of voters concerned about election integrity deserve to be heard," he said that he would "object on January 6 on their behalf."

He has reportedly been joined by more in the GOP who back his assertion that he "cannot vote to certify the electoral college results on January 6 without raising the fact that some states, particularly Pennsylvania, failed to follow their own state election laws."

CNN reported that Senate Majority Leader Mitch McConnell had instructed Republicans not to go ahead with opposing the vote. However, McConnell has also withheld the scheduling of a vote on the COVID relief bill, which was passed by the House, signed by Trump, and now will be unlikely to clear the Senate prior to the new year.

Hawley has been publicly joined by Tennessee's Diana Harshbarger and Louisiana's Clay Higgins.

Hawley stated that he "cannot vote to certify without pointing out the unprecedented effort of mega corporations, including Facebook and Twitter, to interfere in this election, in support of Joe Biden. At the very least, Congress should investigate allegations of voter fraud and adopt measures to secure the integrity of our elections."

Hawley said "But Congress has so far failed to act."

Hawley was widely criticized for voicing his concerns, including by Democrats who were pleased to behave similarly when the conflict was in their favor. Sen. Dick Durban said that Hawley's statement was:

"The political equivalent of barking at the moon. This won't be taken seriously, nor should it be. The American people made a decision on November 3rd and that decision must and will be honored and protected by the U.S. Senate and House of Representatives."

This resulted in Congress needing to debate separately for two hours over whether or not to allow Ohio's votes for Bush to stand. While neither chamber voted to reject the votes, Sen. Dick Durban backed the move to consider rejecting the votes, saying that:

"Some may criticize our colleague [Sen. Barbara Boxer] from California for bringing us here for this brief debate," Durbin said at the time, noting that he would not vote to reject Ohio's electoral votes. "I thank her for doing that because it gives members an opportunity once again on a bipartisan basis to look at a challenge that we face not just in the last election in one State but in many States."

After the Nov. 3 general election, issues regarding alleged ballot fraud and election irregularities were raised, and the Trump campaign pursued lawsuits in Pennsylvania, Wisconsin, Michigan, Georgia, and Nevada to obtain recounts and audits of absentee ballots.

The state of Texas brought a case against Pennsylvania to the Supreme Court, but the court declined to hear it. Despite legal failures, many in the GOP have stated their ongoing concerns not just about the general election results, but election and voting procedures in states across the US.

A major issue concerned absentee balloting, which was ramped up as Democrats stoked fears that voting in person could spread coronavirus and pose a danger to those practicing their civic duty.

There have only been two presidential elections that were decided in the House of Representatives, those in 1800 and 1824. However, Congress has never amended the Electoral College votes.