Austin Joyner claims that he was publicly humiliated at a YG rap concert for refusing to denounce Donald Trump. Now he’s speaking out. 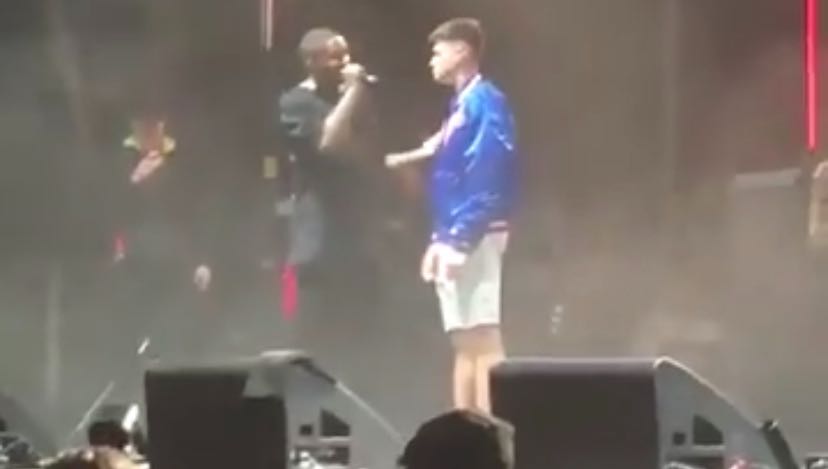 Austin Joyner claims that he was publicly humiliated at a rap concert for refusing to denounce Donald Trump. The young man, who says he just celebrated his eighteenth birthday after these events, claims he was singled out at a rap concert by YG, otherwise known as Keenon Jackson,  for staying silent while the crowd was asked to chant “F*ck Trump”

The event was captured on video and went viral with TMZ reporting on the event. Joyner says “all I did was stand there.” He didn’t participate in the chant because he didn’t feel comfortable and as a result he says he was hauled on stage and publicly humiliated.

Joyner says he didn’t want to make any political statement and, as a result, his silence was presented as a form of political speech against his will. Joyner respects freedom of speech but feels that YG “crossed a line” by trying to force him to say words on demand that he didn’t agree with. Joyner stated that “every person is entitled to their own beliefs, unfortunately not everyone respects that.”

Joyner says that when he was forced on stage, he reached his hands out to the crowd in an attempt to gain confidence to handle the situation. Joyner posted that he is a “proud Christian” and was not comfortable engaging in the type of speech the rapper was demanding from his audience. Joyner clarifies that he would not have publicly cursed any president, regardless of who they were or which party they belonged to.

Joyner is devastated that he was painted as a racist for his refusal to curse President Trump, feeling the need to point out that he attended with friends who were Hispanic and Nigerian. He says that he, himself, is of mixed race though he was smeared as a Caucasian with privilege.

Joyner was unable to remain at the concert after being “kicked offstage” by YG and security allegedly told him that he should leave as they felt his safety was in jeopardy after the public humiliation.

Joyner says he finds it a “strange ‘coincidence’ [YG] picked on a supposedly ‘racist white boy’ like [him] out of all the people in the crowd that night.” He hopes that this mistake will make the rapper a better person if he chooses to learn from that mistake.